One of the great modern battles of data science and machine learning is "Python vs. R." There is no doubt that both have gained enormous ground in recent years to become top programming languages for data science, predictive analytics, and machine learning. In fact, according to a recent IEEE article, Python overtook C++ as the top programming language and R firmly secured its spot in the top 10.

However, there are some fundamental differences between these two. R was developed primarily as a tool for statistical analysis and quick prototyping of a data analysis problem. Python, on the other hand, was developed as a general purpose, modern object-oriented language in the same vein as C++ or Java but with a simpler learning curve and more flexible demeanor. Consequently, R continues to be extremely popular among statisticians, quantitative biologists, physicists, and economists, whereas Python has slowly emerged as the top language for day-to-day scripting, automation, backend web development, analytics, and general machine learning frameworks and has an extensive support base and open source development community work.

R's nature as a functional programming language provides users with an extremely simple and compact interface for quick calculations of probabilities and essential descriptive/inferential statistics for a data analysis problem. For example, wouldn't it be great to be able to solve the following problems with just a single, compact function call?

The R programming environment can do all of these.

More Python Resources
On the other hand, Python's scripting ability allows analysts to use those statistics in a wide variety of analytics pipelines with limitless sophistication and creativity.

To combine the advantages of both worlds, you just need a simple Python-based wrapper library that contains the most commonly used functions pertaining to probability distributions and descriptive statistics defined in R-style. This enables you to call those functions really fast without having to go to the proper Python statistical libraries and figure out the whole list of methods and arguments.

I wrote a Python script to define the most convenient and widely used R-functions in simple, statistical analysis—in Python. After importing this script, you will be able to use those R-functions naturally, just like in an R programming environment.

To maintain the spirit of R styling, the script uses no class hierarchy and only raw functions are defined in the file. Therefore, a user can import this one Python script and use all the functions whenever they're needed with a single name call.

Note that I use the word mimic. Under no circumstance am I claiming to emulate R's true functional programming paradigm, which consists of a deep environmental setup and complex relationships between those environments and objects. This script allows me (and I hope countless other Python users) to quickly fire up a Python program or Jupyter notebook, import the script, and start doing simple descriptive statistics in no time. That's the goal, nothing more, nothing less.

If you've coded in R (maybe in grad school) and are just starting to learn and use Python for data analysis, you will be happy to see and use some of the same well-known functions in your Jupyter notebook in a manner similar to how you use them in your R environment.

Whatever your reason, using this script is fun.

To start, just import the script and start working with lists of numbers as if they were data vectors in R.

Maybe you want to know the answer to the following question:

Suppose a machine outputs 10 finished goods per hour on average with a standard deviation of 2. The output pattern follows a near normal distribution. What is the probability that the machine will output at least 7 but no more than 12 units in the next hour?

The answer is essentially this: 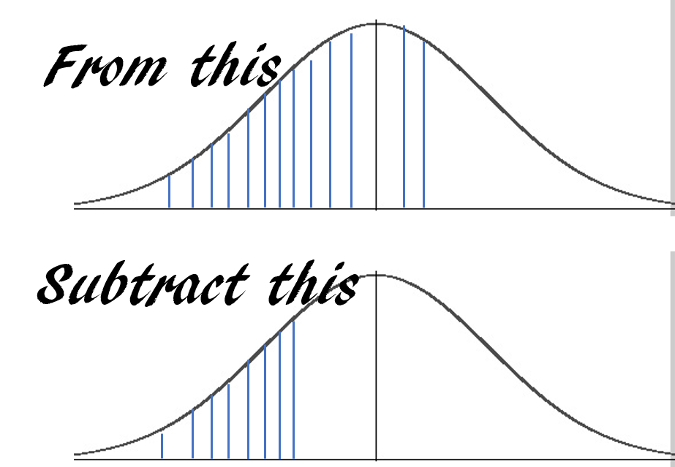 You can obtain the answer with just one line of code using pnorm:

Or maybe you need to answer the following:

Suppose you have a loaded coin with the probability of turning heads up 60% every time you toss it. You are playing a game of 10 tosses. How do you plot and map out the chances of all the possible number of wins (from 0 to 10) with this coin?

You can obtain a nice bar chart with just a few lines of code using just one function, dbinom: 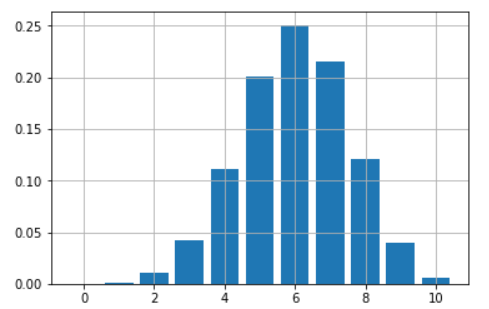 R offers an extremely simple and intuitive interface for quick calculations from essential probability distributions. The interface goes like this:

In our implementation, we stick to this interface and its associated argument list so you can execute these functions exactly like you would in an R environment.

The following R-style functions are implemented in the script for fast calling.

Obviously, this is a work in progress, and I plan to add some other convenient R-functions to this script. For example, in R, a single line of command lm can get you an ordinary least-square fitted model to a numerical dataset with all the necessary inferential statistics (P-values, standard error, etc.). This is powerfully brief and compact! On the other hand, standard linear regression problems in Python are often tackled using Scikit-learn, which needs a bit more scripting for this use, so I plan to incorporate this single function linear model fitting feature using Python's statsmodels backend.

If you like and use this script in your work, please help others find it by starring or forking its GitHub repository. Also, you can check my other GitHub repos for fun code snippets in Python, R, or MATLAB and some machine learning resources.

Originally published on Towards Data Science. Reposted under CC BY-SA 4.0.

Tirthajyoti Sarkar - Dr. Tirthajyoti Sarkar lives and works in the San Francisco Bay area as a senior technologist in the semiconductor domain, where he applies cutting-edge data science/machine learning techniques for design automation and predictive analytics. He contributes to open source software and writes regularly on various topics in data science, machine learning, and programming in top online platforms. He is also developing courseware on data wrangling and machine learning with leading publishing...
More about me

Great article and great resources. Thank you for sharing.

Great article and congratulations for you work.
I've been a Python fan for nearly two decades. Now I'm swtiching to Kotlin. I think it has the merit to become the "new python". It has a lovely syntax that allows for any short of progeamming paradigm, integrates easely with Java (spark, kafka,...), can run up to 40 times faster than python, it's statically typed (errors detected at compile time, no random runtimes errors) but still as easy to work with as python.
Best at all, kscript makes it simple to use it "a la script" while still allowing to manage package dependencies with advanced java tools like "maven" by just adding comments or meta-annotations.
Ah, it has also become the default language for Android (millions of developers and professional free IDEs) and is making big inroads in the financial world (R3 Corda...).
Kotlin basically means that we have a common tool to take advantage of all developments done in the last 30 year in computer language theory, JVMs, compilers,... While still using a friendly scripting way to work with. I guess it will outpace Python or R in not much time.
Or maybe Python will learn from Kotlin and add the missing features. In any case a win-win scenario for all of us.