Set up ZFS on Linux with yum

I am a Fedora Linux user who runs yum upgrade daily. While this habit enables me to run all the latest software (one of Fedora's four foundations is "first," and it lives up to that), it also highlights any incompatibilities between the ZFS storage platform and a new kernel.

As a developer, sometimes I need new features from the latest ZFS branch. For example, ZFS 2.0.0 contains an exciting new feature greatly improving ZVOL sync performance, which is critical to me as a KVM user. But this means that if I want to use the 2.0.0 branch, I have to build ZFS myself.

At first, I just compiled ZFS manually from its Git repo after every kernel update. If I forgot, ZFS would fail to be recognized on the next boot. Luckily, I quickly learned how to set up dynamic kernel module support (DKMS) for ZFS. However, this solution isn't perfect. For one thing, it doesn't utilize the powerful yum system, which can help with resolving dependencies and upgrading. In addition, switching between your own package and an upstream package is pretty easy with yum.

In this article, I will demonstrate how to set up a yum repo for packaging ZFS. The solution has two steps:

To create RPM packages, you need to install the RPM toolchain. Yum provides groups to bundle installing the tools:

After these have been installed, you must install all the packages necessary to build ZFS from the ZFS Git repo. The packages belong to three groups:

Now you are ready to create your own packages.

Set up a yum repo

In yum, a repo is a server or local path that includes metadata and RPM files. A consumer sets up an INI configuration file, and the yum command automatically resolves the metadata and downloads the corresponding packages.

Fedora provides the createrepo tool to set up a yum repo. First, create the repo and copy all RPM files from the ZFS folder to the repo. Then run createrepo --update to include all packages in the metadata:

Create a new configuration file in /etc/yum.repos.d to include the repo path:

Finally, you have reached the end of the journey! You have a working yum repo and ZFS packages. Now you just need to install them:

Run sudo zfs version to see the version of your userland and kernel tools. Congratulations! You have ZFS for Fedora.

What Stratis learned from ZFS, Btrfs, and Linux Volume Manager 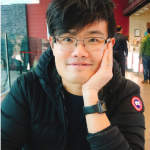 Sheng is an advocate for self-hosting with open source technology and a big fan on distributed systems, virtualization, and file system technologies. He works for medical imaging software industry.
More about me