Can hierarchy and sharing co-exist? | Opensource.com

Can hierarchy and sharing co-exist? 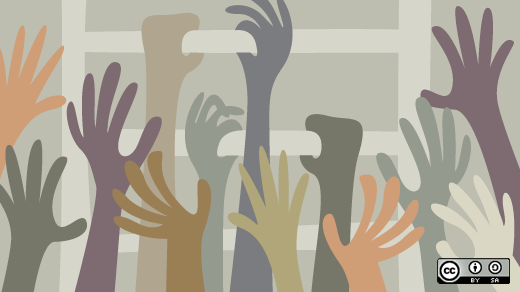 I'm usually a fairly upbeat person, but there's something that never fails to depress me: the misappropriation of ideas. Don't misunderstand; I'm all about sharing. But I also believing in giving credit where it's due. And in the business world, these two ideas often seem to be at odds with one another.

Here's how it happens. John, Jason, and Sarah all work in the marketing department of a major clothing retailer. John reports to Sarah, who reports to Jason. (That makes John the lowest guy on the corporate totem pole, while Jason is the highest.) John works with Sarah on what proves to be a major project for Sarah's career. Sarah approves John's work and tells him repeatedly what an incredible idea he had and how this project will be a turning point for the company.

Go-live day arrives and John and Sarah are celebrating with some beer at the launch party—it's a hip clothing company, after all—when Jason heads over to congratulate Sarah on her success. John stands next to her, his heart pounding as he realizes this is his big moment to be recognized for his innovative idea—the one that made the project. This is when upper management will know he's a guy to keep an eye on.

Sarah introduces John to Jason. “Have you met John? He worked with me on this project.” Jason gives him a nod and a smile, then turns to Sarah and raves about this project she's put together. He just loved [the innovative idea]. The project would have been nothing without it.

By now, John is terrified to take a sip of his beer, lest that be the moment when the conversation turns to him. He's deftly wiping his sweating palm on the side of his pant leg, in case Jason pumps his arm up and down.

“Yes, it really did turn out wonderfully, didn't it?” Sarah smiles. “I'm so glad it's been so well received. We all put in a lot of hours on this one.” Jason nods approvingly.

John's eyes dart back and forth between Sarah and Jason, realizing that she hasn't told Jason who thought of the great idea. Worse, Jason is going to walk away thinking it's Sarah's idea. He scrambles for some way to gracefully reclaim his idea. His career-altering moment. Something... anything...

Jason lifts his beer as if to toast them, then excuses himself to continue the rounds at the launch party. Sarah gives John a playful nudge and says, “Pretty crazy, huh? Couldn't have done it without you, buddy.” Then she heads over to another colleague waiting to congratulate her.

John looks down at his beer and suddenly wishes for a few more.

Reaching for the stars

What motivates an otherwise great coworker—or more often, superior—to put others in such awkward positions?

My money's on the possibility of upward mobility. Nothing undermines relationships more than competing self-interests. For Sarah, this project represents her team's moment in the spotlight—and by extension, hers. When Jason approaches to congratulate her, Sarah doesn't take all the credit for the project; she gives her team a nod by mentioning the long hours they've pulled. But this only boosts Sarah's position; in addition to an innovative thinker, she's also a team player. She's practically screened “Promote me!” on her designer t-shirt.

What would happen if Sarah spoke up and praised John for the idea and much of the work on the project? Jason might well turn in surprise and look at John with interest. He might look at Sarah as a good project manager, but he's likely thinking about John's future at the company.

But is Sarah wrong? Maybe not.

Have you ever tried to climb up a ladder next to another person? Me neither. There's probably a good reason why. We'd both be grappling for space on our rung while someone else trampled over top us.

Unfortunately, this little corporate fairy tale—more Brothers Grimm than Disney—is one of the many ways that the scramble for power undermines the sharing of knowledge. I see it repeated between middle and upper management, in competing departments, and steeply increasing the higher you move up the ladder, as those in lofty places have already eliminated less competitive players.

I'd love to tell you that the answer to my original question is “yes, they can co-exist.” But I'm not so sure that's possible.

If you've seen it work, I'd love to hear how.

Wait a minute while I look around the virtual room looking for answers...

It's a meritocracy, sure. But few large projects are without any hierarchy at all, even if it's an informal, unstated one.

And it's pretty cynical to assume that all formal, corporate hierarchies work like this scenario. That's not to say it never happens, because I know I've been in John's position. But I think that a company that manages to be both successful at its business and at working the open source way can do both.

work this way, just that I have rarely seen these actions go unrewarded, and that it does happen a lot.

I've often wondered if it's part of the reason that women (statistically) don't rise up the corporate ladder at the same rate as men; we're socially conditioned against both self-promotion and hurting other people's feelings. (Though admittedly I missed most of that conditioning somehow.)

In any case, I think the introduction of money cannot help but change things, and that would be the obvious problem with looking to the (free) open source world for examples. I'm more interested in how companies that pay for open source make that transition without significant culture changes, especially as the company grows and the open source developers are outnumbered by new hires in sales, marketing, HR, etc.

Rebecca-- I think this is a great example of a management design flaw. By that I mean a structural flaw in the way the organization is designed that puts good people in bad situations.... and sometimes makes them act badly.

Every corporation has one or two people who are just plain evil, but in the majority of cases I've experienced, good people, who you'd probably have fun hanging out with after work and all that, are forced into bad behavior by the management structure around them.

In fact, you've probably, at some point in your career, had a situation like the one above happen with someone you worked with who was *actually* one of your best friends outside of work. I sure have. And it sucks big time when the design of the management structure forces even best friends into adversarial situations.

Your ladder analogy is a good one. When people are desperate and there is only one ladder, we are asking a lot of good people to resist the tendency to climb.

But Ruth is right on by suggesting the open source community has found a way:

After all, who says there have to be only one ladder to climb?

I also think the part of DrupalCamp keynote about knowing when to step aside is relevant too. When those at the top of the ladder recognize that the ones below them are ready to be higher, they... climb up on the roof? Onto another ladder? This analogy might be sagging now. :-)

I hadn't thought of it through that specific lens.

I guess my question would be... is it fixable? How?

And yes, I agree that it's rarely an "evil" person who does these things. It may well be that a flaw in the structure or system encourages the behavior.

On the other hand, we're all capable of rationalizing to extraordinary degrees. I remember hearing an NPR interview with a normal, nice guy arrested for white collar crime. It's been too long for me to remember the specifics but he basically explained how he just allowed his thinking to become distorted to the point that he could do something that sent him away to jail for years. And as we've seen from the epidemic of white collar crime, when people are in a situation where doing the wrong thing seems understandable or more rewarding than the right, it doesn't lead to positive outcomes. :)

But we also know from behavioral economics that humans don't often act rationally, despite our own beliefs. We'll pour more money into an expensive but failed project rather than admit defeat, etc. So it may be difficult to understand our own behavior at times, let alone someone else's.

Could it be that as the corporations became more predatory,
aggressive and greedy the members of the corporate
community would also become less nice?

Hopefully the preceding post: https://opensource.com/life/10/9/phase-1-garage-next-generation-entrepreneurship
will herald a new way of doing things.

And people wonder why innovation is dead in corporate America.

You have a point, whether it is corporate or open source there will be a hierarchy of some sort and situations like this can occur.

The benefit with open source is that since more of it is transparent, it is easier for one to come to their own conclusion. This alone can help counter this type of activity, but it can't fully eliminate it.

I would think that open source provides more means for somebody to utilize "unofficial power" much the way "official power" is abused in a corporate environment.

I don't think this can be totally eliminated. In corporate companies there is always going to be some kind of heirachy. Person A wil report to Person B etc. In this situation it's hard to say who was right or wrong. It would have been worse if Sarah had not acknowledged John at all. Maybe John should have spoken up a little more. But it is certainly a difficult situation.