True confessions: I’ve been using OpenOffice since 2002 (since I started working at Red Hat, where it was mandated) and… I don’t like it (*gasp* – did he just say that?).  Yep, it’s true.  OpenOffice is just not that great of a user experience.  Microsoft Office, with all it’s bloat, is better.  Apple iWork is even better – that is -  from the perspective of an end user.  But you know what?  It doesn’t matter what I think. That’s because the real value of OpenOffice is not the end-user experience – it’s the fact that OpenOffice is a powerful, open content creation platform.

I will let other people debate Oracle’s motivations, Apache vs. The Document Foundation (TDF), etc. but here are a few interesting facts:  OpenOffice is one of the most successful and vast open source projects in the world (1.2 million downloads a week and 135 million known distributions).  OpenOffice.org gets 10x the number of unique visitors as the Apache.org homepage itself, according to Compete. By measures of downloads and web traffic, OpenOffice is as relevant as ever. 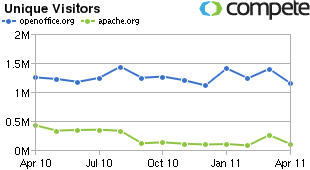 Innovation happens. Cloud apps get richer in-browser editing without having to start from scratch.  Vertical markets – healthcare? manufacturing? finance? – get slimmed-down, purpose-built productivity and content tools that allow them to avoid all of the Microsoft bloat (and cost) and give their users exactly what they need to get the job done.  Developing nations get a powerful, free productivity suite in whatever obscure language they need.  The line between offline and online editing gets blurred, with unique integrations (save to Evernote?  save to iCloud?  offline editing tool for WordPress blogs? integration with Skype presence or Google Apps?).  And, with the power of the OpenOffice brand, web traffic, and distribution network, there are already 100 million users eager to download and try these solutions.

OpenOffice couldn’t survive inside of Sun & Oracle because Sun & Oracle don’t sell to users – they sell to corporations.  Let’s celebrate that OpenOffice will now be in a place (and with a license) where its natural position as a powerful content creation platform can blossom to accelerate innovation in a space that desperately needs new ideas.

This article was originally posted on socialcontent.com.

Todd Barr - Todd Barr is the CMO of Alfresco software. Todd has been marketing free and open source software for the last 10 years for companies and projects like Red Hat, JBoss, Ruby on Rails, FreePBX and now Alfresco.
More about me

I've never been overly fond of OpenOffice's interface either, and it gets worse compared to Office 2010. I use it at home because I must (only Linux runs at home), but if I could get Office 2010 to run in Linux (natively, mind you) I would be in computer Nirvana!

When Office 2010 came out it leapfrogged it's two competitors by offering a natively installed Office suite (unlike Google Docs) which allows for uploading and synchronizing with the web, including a web-interface (unlike OpenOffice).

While not perfect, the closest I have found for OpenOffice is the extension <a href="http://extensions.services.openoffice.org/project/ooo2gd">OpenOffice.org2GoogleDocs</a> which allows importing and exporting OpenOffice files with Google Docs.

For a cloud-based solution the closest I've seen is Box.net (business, the paid version) + Google Docs provides online storage and the ability to open documents in Google Docs and save them back into your Box.net storage. I think the business version also allows for file synchronization (like Dropbox) but only for Windows (Mac is coming, Linux is "we promise"...)

Alone, Google Docs and OpenOffice cannot compete toe-to-toe for users because when given a choice they will go with the "user experience" focused programs because they are, well ... , users.

There is still a lot of potential in the Office suite market and as usual Open Source has the enviable position of being able to build something powerful that meets the needs of the user.

Unfortunately once you include a server component, you have to somehow make money to pay for the server. Otherwise if it is an online-based solution that you can install on your own servers, and the User-Experience is good enough, there may be a significant corporate uptick as companies with multiple locations and/or mobile employees can benefit from a locally-controlled Cloud-based solution that integrates seamlessly with their in-office installed office suite.

And that, would allow OpenOffice/LibreOffice/*office to leapfrog Microsoft and Apple.

This has to be one of the most clueless attempts at analysis I have seen so far. It ignores so many publicly-available facts, like:
<ul><li>The OpenOffice.org community (apart from the Sun employees and a few publicity-seekers) moved en-masse to LibreOffice, where it is thriving and serving end-users at least as well as Sun ever managed.
<li>The code is a hairball that will take many months to untangle and them make conformant to Apache's strict rules about what may be released. No releases until that's done.
<li>Apache is not and has never been a community that served end-users and shows no early signs of understanding what that would take.
<li>... and much more.</ul>
<p>While there's the potential for good to arise from Apache in the long term if a suitably skilled and motivated community arises there, the right place to look for all the effects the article mentions is not even discussed. It's the new community that has arisen phoenix-like from OOo, LibreOffice, hosted by the energetic (and sometimes controversial) Document Foundation.

I am not a fan of the decision to give OOo to Apache. While I respect Apache's choice of license for its own work, I think it is pretty clear it is not the license type that the community wants for its office suite. In my mind, Oracle is just trying to skate around their behavior that no one likes. It looks like they are being nice and all, but at any point they can swoop in and take the work that the community has put into the project. I think the project will do much better in a GPL type environment. I think most distro's are of the same opinion as many have switched to libreOffice.

The move and acceptance into full Apache isn't written in stone yet. They still have to get the source and licensing issues worked out as well as other details before graduation. OOo could still fail .... Not meaning to try and spread bad news, since I was one who voted yes.

I cannot believe you guys complain about the OO user interface. It is a whole lot more intuitive than the Office 2007 ribbon!

Sure, some "power users" may find it a little difficult to work with some of OO's features,especially the database stuff. But lets face it, 95% of Microsoft Office users do not touch even 5% of its features.

It does not matter how pretty it is, its all about how well it works at enabling you to get your job done. OpenOffice/LibreOffice just works.

The move and acceptance into full Apache isn't written in stone yet. They still have to get the source and licensing issues worked out as well as other details before graduation. OOo could still fail .... Not meaning to try and spread bad news, since I was one who voted yes.

First I disagree with the comment that said the Apache Foundation is not a community that serves end users, in fact I'd say the opposite. Nor do I subscribe to the notion that the OpenOffice.org users prefer a different license then the apache license. While some may prefer the gpl, many others do not have a preference or prefer a more open license then the gpl. For one, I am overjoyed to see that IBM plans to integrate the Symphony UI code and some other improvements they have made into openoffice.org

<em>First I disagree with the comment that said the Apache Foundation is not a community that serves end users, in fact I'd say the opposite.</em>
<p>You can say what you want, but that statement is clearly wrong as Apache is by definition a community of developers creating middleware. It has almost no software targeted at civilians. Consequently it has no track record of directly serving civilians, as well as rules and norms that mean they feel overwhelmingly out of place when they do show up.

And that's painfully obvious on the new Apache OOo mailing lists, where the bellicose bullying of an IBM project manager who wants to be seen as the leader so he can be the VP of the project if it graduates from the incubator is tolerated, but contributions from people trying to make peace get ridiculed.

<em>Nor do I subscribe to the notion that the OpenOffice.org users prefer a different license then the apache license.</em>
<p>I didn't say anything about this, so this is your agenda and thus interesting data.</p>

<em>For one, I am overjoyed to see that IBM plans to integrate the Symphony UI code and some other improvements they have made into openoffice.org</em>
<p>When it happens I may be delighted too; IBM has made many grandiose promises related to OpenOffice and delivered on none of them, so excuse me if I remain sceptical until they deliver. But be careful; many of the things that make Symphony interesting are derived from the underlying Eclipse framework and are thus not part of the "donation".<p>

You are mistaken since everyone on various apache project teams are not developers in the first place.

"Oh, and thanks for dropping by to respond after all this time :-)"

No problem, I figure intelligent people know how to stop comments to their blogs after a certain period if they want that.