What is the best social structure for an open source project?

In this article, we examine this question by analyzing three common models: the benevolent dictator for life (BFDL), hierarchy, and community models with two graph theory metrics that quantify their robustness and information transmission capabilities.

Long before the likes of Facebook and LinkedIn became popular, open source projects developed social structures through mailing lists. In that history, a few organizational structures governing the review and integration of code have emerged.

The term Benevolent Dictator for Life refers to a single individual that controls a project's direction, such as Guido van Rossum of the Python programming language. For larger projects this only applies to issues where there are arguments or disputes, but the model taken to totalitarian extremes is represented by Figure 1. In this model, one person reviews and controls all patches before they are committed. This structure is fostered by tools like GitHub when patches are reviewed after forking and creating a pull request for a single-owner repository.

Another model that can be considered is the hierarchical structure, shown in Figure 2. Familiar from militaries and industrial era corporations, generals delegate to lieutenants, who delegate to majors, etc. The detail and scope of reviews decrease and increase, respectively, as they travel up the hierarchy. A famous example is the Linux kernel, where Linus Torvalds delegates to lieutenants for the various sub-systems of the kernel.

The third model we'll consider is the community structure, Figure 3. These self-organizing networks emerge when members contribute reviews as they are willing and able. This type of network is encouraged by tools like Gerrit or when anyone is encouraged to perform a review that shows up on a label rating board. Interestingly, the number of reviews performed by community members follow a power law, just like the distribution of code submitted.

We can assess models in Figures 1-3 with metrics defined in social network theory. In these models, each node represents a person and each edge represents a code review.

How the models perform

The BDFL model, Figure 1, performs very well in information transmission (closeness centrality), but lacks robustness. Since the central BFDL node is involved in all the reviews, they impart their knowledge and pass on information from every other participant in the network. However, the central BFDL node is also a single point of failure. Should the BDFL switch jobs, go on vacation, discover a new programming language, get hit by a bus, be abducted by aliens, etc., the network will collapse. The degree of the central node, how many code reviews that are performed, is also very high. This is likely to cause burnout and makes it difficult for the network to scale.

While the community code review structure in Figure 3 lacks the regularity found in Figure 1 or Figure 2, it both has high information transmission capabilities and is very robust. While there is not an express BFDL or top of the hierarchy, leaders still emerge in this structure. Leading roles are determined by actions, e.g. the amount of reviews performed, instead of their position in the network. But there are additional requirements in this free form organization. Higher amounts of communication are necessary—there are more edges than the other models. Also, this situation requires tools and objective criteria to make effective decisions; whether to merge a patch can depend on whether it passes all unit tests, has reached the standard testing code coverage, passes automated style checks, etc. as opposed to "whether Lieutenant Dan says so."

We have seen that a community code review structure is mathematically superior to centralized or hierarchical systems in its ability to spread knowledge effectively and its vulnerability to people's changing life situations or poor performance or burnout. Of course, these are not the only important factors -- for example, these models do not capture the value of an individual's level of experience. 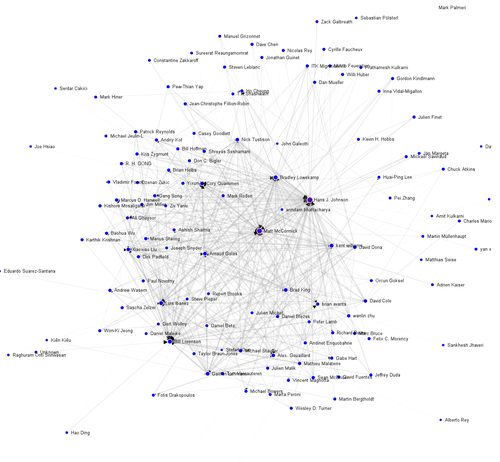 Figure 4: Code review network of a real project, the Insight Toolkit (ITK). Like the other figures, the size of the nodes is related to its closeness centrality, and the color of nodes is coded by their betweenness centrality. The width of edges is related to the number of reviews. Click for the full visualization.

Also, real projects are not cleanly classified in one of these idealized models; most are a hybrid of the described models or other models. An example based on real data is the code review structure of the Insight Toolkit, Figure 4. Projects that claim to operate under a BFDL model cannot scale without some distributed workload. Projects that claim to operate under a community structure are influenced by tenured operations.

Finally, it is important to remember that the code review structure is secondary to the quality and quantity of those performing code reviews. The practice of code reviews in open source communities is an opportunity to learn from each other and serve one another.

Source code for the analysis and visualizations presented in this article are available on GitHub. The data and visualization in Figure 4 are derived from an article describing ITK's role in reproducible research.

What to read next
Matt McCormick 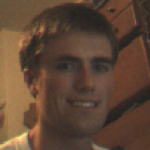 Matthew McCormick is a open source, medical imaging researcher working at Kitware, Inc. Matt is an active, contributing member of scientific open source software efforts such as the Insight Toolkit (ITK) and scientific Python (SciPy) communities. He received a B.S. in Biomedical Engineering with a focus on biomechanics from Marquette University in 2005.
More about me