Nearly a decade after the launch of the open access Malaria Journal, the publication released a report about how open access has impacted the study of malaria. Launched in 2002 as the only scientific journal devoted exclusively to malaria research, Malaria Journal became a top ranked journal for tropical medicine within just a few years.1

In fact, by 2009 the “big 10” most prestigious journals published only 4.4% of the year's malaria papers, while 21% were published in open access (OA) journals. Malaria Journal published more than any other journal. (See Figure 1.2) 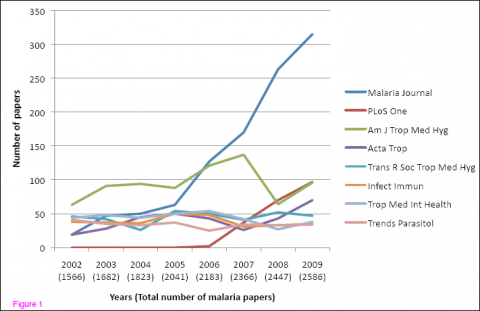 Though open access journals existed before Malaria Journal—parent company BioMed had been producing others for some time, and the Public Library of Science's OA journals entered the scene in 2001—its success inspired a number of researchers to create additional “specialty” open access journals with similarly narrow focus.

The open access movement has proven itself worthy of attention. While it has long been established (and makes sense) that papers freely published are cited and referenced more than those locked behind paid subscriptions, critics have wondered if researchers are simply more likely to provide open access to significant papers. A study released by PLoS One at the beginning of Open Access Week 2010 blows that myth away, finding that papers published with open access are more frequently cited whether the researchers willingly granted the access or were required to do so by policy.

The Green Road vs. The Gold Road

There are two distinct paths followed to provide open access, though they do occasionally intersect. The “Green” road is where authors provide access to their published work through self-archiving (on a personal website or a public or institutional repository). This path is readily accepted by a larger number of academics, because it enables them to publish in many highly prestigious journals that are not open access, while also providing their work to the general public.

According to a study by Muluken W. Alemayehu, at the University of Oslo 32 out of 45 professors surveyed “agreed” or “strongly agreed” that the scholarly research results from the university should be available to the public in an institutional repository, 12 were “neutral” on the idea, and only one disagreed. Of the 45, 31 were previously unaware of the concept of an institutional repository, and of those 22 were from among the 32 who agreed with making the research available there. Five respondents were interested in adding other types of content to the repository but not their scholarly articles, citing conflicts with the publishers and other concerns.

These concerns are not unfounded. Blogger, software engineer, and paleontologist Mike Taylor chronicled his recent struggle to provide open access to his sauropod dinosaur history paper published in a special volume by the Geological Society of London:

"In general, I find it iniquitous that when authors freely contribute their work to journals and books — especially books as spectacularly expensive as the Dinosaur History volume — the publishers try to restrict those authors’ rights to give copies of their own work to their friends and colleagues.  It’s just wrong.  It should be enough that we allow them to publish and sell our work for no fee; that they should then limit what we do with it is — well, I hate to repeat myself, but I can’t think of a better word than: wrong."

Taylor solved the problem by exploiting a loophole in the writers agreement and signing over the rights to his paper to his wife, who... well, I don't want to spoil the story for you. It's funny and sad at the same time. (If you did a double-take at the words “software engineer and paleontologist,” you may be as intrigued as I was to discover how many amateur paleontologists provide valuable research and labor to the field. There's even an Open Source Paleontologist.)

Publishing directly to open access journals—the “Gold” road—certainly solves the problem of copyright ownership. While many OA journals (like Malaria Journal) are highly regarded, authors are often hesitant about traveling the Gold road. Research services librarian Dorothea Salo addresses this crowd with a common-sense approach to moving in that direction while furthering your career:

“Something I hear a lot when I suggest publishing in a gold open-access journal is, “well, I’m not going to give up a slot in Nature or Science for open access.” Well, of course you’re not. I’ll see you in Nature and Science, then. Oh, wait, I won’t?

Right. The number of choices that stark really does approach zero. I’ll never be published in Nature or Science. I love you, I love your research, but chances are you won’t either. So let’s back away from the black-and-white and consider the vastly more common situation of quite a few journals of acceptable prestige, some of them various degrees of open, from which you might choose.”

Incidentally, Salo's guide to journal selection (further down in the blog post) would make an excellent basis for a flowchart.

When a parent, child, or spouse is diagnosed with an unusual medical condition, we often search the Internet for pertinent research and studies. But while the papers' abstracts are readily available, the valuable details of many studies are locked behind paid subscriptions or expensive pay-per-view access plans. (When I attempted to access one paper on celiac disease, for example, I was given a price of over $40. This is quite a steep price to pay when you're uncertain whether the information will be helpful, or you need to look at multiple studies.)

And doctors don't fare much better; very few have institutional access to every medical journal, limiting the awareness of new treatments, findings, and protocols that could benefit their patients—or even save lives. (For doctors in developing nations or who practice independently of an institution, access to journal studies is often significantly hampered.)

While open access is an excellent means of disseminating information, leaders within the movement quickly realized that a central directory of open access journals would be useful. Directory of Open Access Journals (DOAJ) served this need, and later OpenDOAR launched as a searchable database that reached across repositories and journals.

While the open access movement has made tremendous progress—and had tremendous impact—in the last decade, much work remains. To learn more about current projects and future goals, check out Open Access Week, an awareness event that just marked its 4th annual observation.

1. It rose so quickly to prominence that it still lacks a Wikipedia page! (Hint, hint.)

What to read next
Tags
Education
Open access
Rebecca Fernandez