Best education stories of the year on Opensource.com 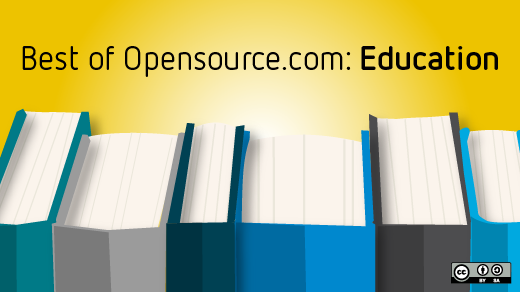 The intersection of STEM (Science, Technology, Engineering, and Math), open educational resources (OER), and computer programming is the focus of a number of the articles published on Opensource.com in 2015. They highlight a growing interest in all three areas where students, parents, and educators have the opportunity to immerse themselves in education as never before.

Typical of the spirit of open source in the classroom are the Asian Penguins, a middle school computer club in St. Paul, Minnesota. At the start of each meeting of the club the leader asks, “How do you change the world?” and the children respond, “Be crazy enough to think you can!” Their simple mantra is enough to spur creativity and caring that goes beyond the classroom out into the community as they refurbish computers with Linux for those in need.

Joshua Allen Holm wrote about UberStudent, a Linux distribution packed with educational applications right out of the box. Joshua says, "You will find all the typical software: LibreOffice, Chromium, Firefox, Thunderbird, and all the usual utilities for file management, archiving, and other basic tasks. But UberStudent also includes a wide range of software for education users."

And, in our Back to School series Charlie Reisinger, gave us Five open source programs for students and teachers. One of the applications he included is FocusWriter, an open source app designed to cancel out distractions like browser tabs and Facebook.

Nicole Engard interviewed Dr. David Lippman, a professor at Pierce College who has helped students save millions of dollars with shared textbooks. Lippman said, "Why am I having students pay $150 for a book that they only read half of, and we’re not even using for exercises anymore? That’s when I started working on open textbooks and full open courseware." Lippman said, "For people interested in creating content, I’d encourage first the common open source mantra: Release early, release often. Many educators feel like they have to wait until their material has been refined and perfected before they share it, but don’t wait! Let people know it’s a draft, but share it early and other people can help give feedback and improve it."

Open courseware is not limited to higher education, as Stephen O’Connor of Wells Central School in New York State shared with us. He created open content which is used in schools in New York State, and in our interview with him, he said, "I feel that an education is a basic human right; therefore, by creating educational resources and giving them away, you are removing an obstacle to attaining an education. I also feel that the textbook industry has not served us well with quality materials, and I feel they have exploited schools financially."

Luis Ibanez showed readers Blockly and explained how it makes it easier to learn to code. He wrote, "Blockly is the engine running underneath many of the online tutorials used today to introduce people of all ages to programming." In this article he interviews Neil Fraser from the developer team, who shares the Blockly’s perspective and vision.

How else are we nurturing the next generation of programmers? D. Ruth Bavousett tells us about code ninjas and CoderDojos. Take note: All of the organizational documents and promotional materials for the CoderDojo program are available under a Creative Commons license.

Additional programming support for students comes from writer Al Sweigart who said, "A couple of decades ago, if you spent every day in chat rooms with your friends, you were a nerd. Today if you do the same thing, you're just the average Facebook user." In his article, APIs, not apps: What the future will be like when everyone can code, he does this...

Thinking outside the box

As part of our Back to School series, Bryson Payne wrote this in Apps, bots, drones, and 3D printers: Coming to a school near you?: "What if we became laser-focused on introducing children to bots, drones, 3D printers, and coding in high school, middle school, or even elementary school? I believe that one way to gain and maintain the interest of young men and women in these critically needed fields is to let them learn not only how to interact with technology, but also how to control it with simple code starting as early as possible, and show them that they can use the latest technologies as problem-solving tools in any profession."

Finally, the synergy of open source and education is best typified by Phil Shapiro’s article from this year titled Welcome to America: Here's your Linux computer, where he recounts the heartwarming story of immigrant children whose acculturation and education is facilitated by a computer running Linux. Remembering his own story of immigration to the United States in 1973, he responds to this new situation:

"In 10 years time, these kids and their mom may well remember that first Linux computer the family received. Tux was there, as I see it, waiting to welcome these youth to their new country."

Stu, You're welcome. I really love what you and your students are doing. You are a great power of example for others.

Open teaching methods in the open class is great idea; Thank for sharing and I guess it's worth my learning as a teacher.