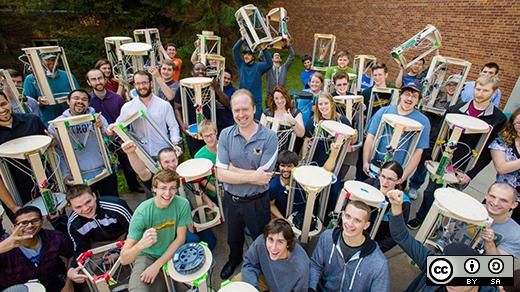 When engineering students start college, the high cost of proprietary tools can be a barrier to making their dreams become a reality. Recent advances in free and open source 3D printing have lowered rapid prototyping costs, making it accessible to everyone. The software industry already knows the force of open source, so now it's time to start teaching free and open source hardware to all engineers.

Last fall, Michigan Tech offered a new course: Open Source 3D Printing. Students pay an additional $500 course fee for the components and tools necessary to build their own MOST Delta RepRap 3D printer, which they then use for the course. At the end of the semester, each student keeps the printer they built and modified. The 50 seats for the class filled immediately. 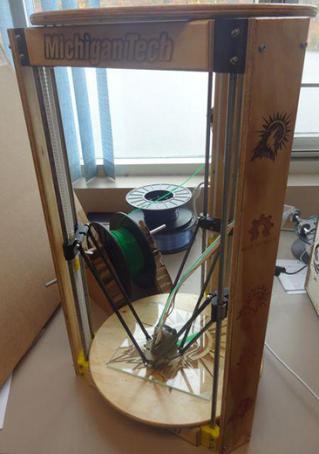 The open hardware community is steadily building on the foundation laid by the free and open source (FOSS) community. Open hardware really took off with the low-cost, easy-to-learn Arduino microcontroller. Of all the amazing projects it enables, perhaps the most interesting was the open source RepRap 3D printer, which stands for self-replicating rapid prototyper. The goal of the RepRap project is to produce a 3D printer completely capable of making itself. It is about halfway there, and most of the non-printable components can be found in a hardware store.

The course essentially distilled the RepRap ethos and formalized it as an introduction to distributed additive manufacturing. We used "Open Source Lab: How to Build Your Own Hardware and Reduce Research Costs" as the textbook to cover the material from an engineering scientist perspective. The course covered the hardware, firmware, slicing, and printer controller software for operating and maintaining the device—all of which are free and open source. The class followed a blended learning format, meaning students often did design project "homework" in class and a lot of reading at home.

On the second day of class, everyone brought an empty box and selected components for their printers from from bins. The full instructions for the build—including videos of the tricky parts—are available for free on the Wiki Appropedia thanks to a grant from William G. Jackson Center for Teaching and Learning. Students had three weeks to complete their printers at home, with some in-class help for those without soldiering equipment and bulk chemicals.

The students were all already makers in their own right, but the world of open source was new to most of them. So for example, some of the mechanical engineers that were already adept at the proprietary and expensive CAD learned how to use open source alternatives OpenSCAD, Blender, and FreeCAD. This is important because all the tools they use in the class will be available to them forever. They will not be chained to commercial CAD software, firmware, or hardware that will quickly become obsolete.

After students built their 3D printers, we worked through five design-prototype projects of progressive complexity to transform them into open source Jedi. First, the students had to make a rock wall hold in OpenSCAD using a bolt template. Rock wall holds are notoriously overpriced, with children's holds going for $5 each and the nicest professional holds ranging anywhere from $50-100 each. This was an easy assignment because the print had to be flat on the bottom to work (making it easy to print) and could look like anything. There was no real design pressure. The class required all students to share their designs with open licenses, so now anyone can print a hold for $1 or make a good climbing wall for the cost of a single proprietary hold. When each assignment was due, we had a show-and-tell to share tips and tricks. The best design or two won a roll of filament. 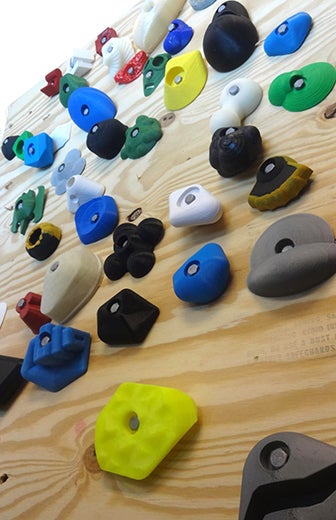 Download and print all 50 derivatives of the rock wall hold bolt template. The human fist hold won this round.

Next, to hone students' open source CAD skills, they were required to decorate a household item pulled from a hat with Celtic knots. This one is challenging, particularly for those opting to use script-based CAD, but the results were pretty remarkable. If you want Celtic decor for any room of your house, the students have you covered. We used the YouMagine repository for this project, and several of the student projects were highlighted, including the Celtic drapery tie. 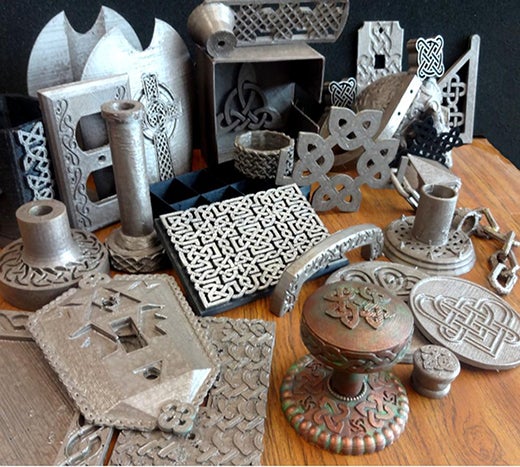 Download and print these Celtic home decor items, including the drapery tie.

Next, we got into the nitty-gritty of the class: designing hyper-expensive 3D printable scientific equipment. We used the methods outlined in the textbook. As previously covered on Opensource.com, labs can save enormous sums of money by 3D printing equipment. Students formed teams with at least one graduate student per team so that they had access to campus labs. Then they did a commissioned assignment for another professor, designing everything from vortex mixers to shadow masks for semiconductor research. We used the NIH 3D printable repository and GitHub (as NIH only supported publishing the STL but not the source). Again, the abilities students demonstrated when they were given the freedom to innovate in open source space was impressive. You can see their work and many more examples here. Consider, for example, this customizable face plate designed in OpenSCAD, which a student group designed for an electrical engineering professor. The students designed all of them, and now even novices can choose their ports, position, and rotate them into place. 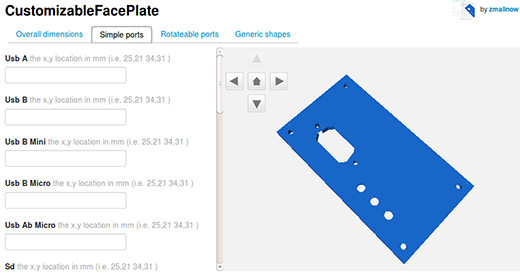 Next, we teamed up with Appropedia, the largest open Wiki dedicated to appropriate tech and poverty reduction. Based on requests from the Appropedia community for 3D printable open source appropriate technologies, students made designs meant to help sustainable development. A doctor from Cameroon requested an otoscope, which is used in routine medical screening. The design below is a prototype, but it is functional and open for anyone to use, adapt, and improve. The assignment page has a wiki template, which makes it easy for the students to start wiki pages. 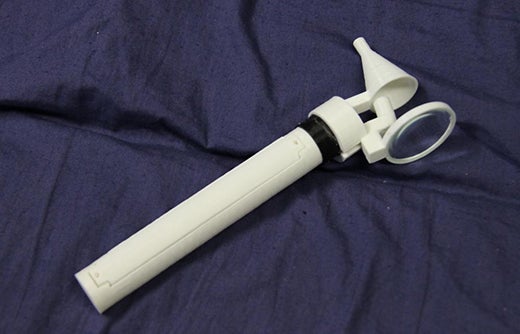 The RepRap motto is "wealth without money." The final undergraduate assignment was to create "wealth" by having students make open source designs that had value to them. By this point in the class, the vast majority of the students had developed into young Jedi masters of open source makerdom–the force was strong with them. They created everything from the "hockey helper," an $11 gizmo you can print for a buck to help newbies in their favorite winter sport, to a full cosplay getup that saved $350. All of their designs are open source, of course, creating enormous value for the entire 3D printing community.

As a general rule, engineering students are makers, but if you really want them to take the shackles off, they have to have 'own' the tools, not just have access to them. This is why it was so important to have the students build, test, troubleshoot, and fix their own printers. They know them intimately—they're not intimidated by fixing problems, taking them apart, or upgrading them with future 3D printable components.

The students would not get the same experience with mere access to some black boxes that can magically 3D print objects. By having an in-depth understanding of the tools, their designs were better. They were able to push the machines to their limits (e.g. printing a stethoscope vertically), and if that wasn't good enough to do what they wanted, they could improve and hack the tools themselves. Graduate students were expected to complete all coursework assigned to the undergraduates as well as an in-depth project, which involved making a significant improvement on the 3D printer itself (e.g. auto bed leveling or error detection). The results were again impressive, and next year's 3D printers will be an evolved hybrid–a superior 3D printer—in part because of student mods, many of which came from undergrads that started tripping out their machines organically.

The open source Jedi masters that left the class will continue to benefit from future students iterating on their work and making better designs. Several students even pulled prime jobs and sweet internships because of their open source class projects. If companies see demonstrations of awesomeness, they want you working for them. Open source hardware now provides this path to employment for engineers, while bettering the world in the process.

This class was the most fun I have had teaching in the last decade, and I think it's a good model for other universities to borrow. The whole thing from start to finish is free and open source (hardware, software, firmware, syllabus, assignments, and the results). There is no reason that this course could not also be ported to entry-level undergraduates and high school students, as almost all the tools used in the class were new to the majority of students.

It is really exciting to think about what the next generation of engineerings is going to be like having access to the force of open source.

Thank you for sharing at so many levels - the article, the course, knowledge, enthusiasm, the designs from the class, etc. Very inspiring.

I would like to enroll for an introductory course in additive manufacturing.