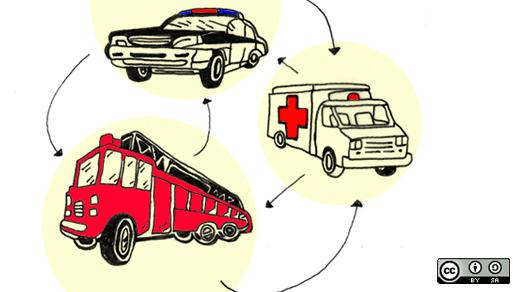 For decades, first responders have dealt with a lack of interoperable communications products. The 9/11 Commission Report1 and the Katrina Report2 both concluded that the absence of interoperable communications among public safety organizations at the local, state, and federal levels was a serious problem and hindrance to emergency response during two of the nation’s worst disasters.

So why is this still a problem, five years after Katrina and nine years after September 11th? The primary reasons are lack of open standards in communications equipment and the clogging of telephone lines and wireless networks during a large-scale emergency. We’ve all heard the “network is busy” message when too many people in our area are trying to make calls at the same time. Imagine that happening to a firefighter during an emergency. Compound that with the fact that your local fire department’s radios may not work with the police station’s radios. And if there’s a large emergency and first responders from another town are called in, well, it just becomes one big mess.

The House Technology and Innovation Subcommittee recently held a hearing regarding the development of a set of standards for emergency digital radio communications called APCO-25 (for the Association of Public Safety Communications Officials International), or simply, Project 25. The goal of the project is to improve public safety responders’ ability to communicate with each other for better coordination and timelier responses during emergencies. Project 25 was initiated twenty years ago(!), and has been the target of criticism and frustration for its snail-paced development. The project has only completed two of the eight standards required to ensure full interoperability of land mobile radio systems made by different manufacturers3.

According to Russ Sveda, manager of the Interior Department's radio technical service center, "We have invested 14 years in this technology and today we are still unable to design and install a Project 25-compliant system without significant engineering and customization.”4 There’s a lot of speculation on why the standards have been so slow to develop, including the fact that the vendors themselves see little benefit in developing interoperable products, when they would rather lock in customers to one system.

But equipment isn’t the only issue. Wireless networks can quickly become clogged when a flood of panicked victims and first responders try to use their cell phones and radios all at once. A national interoperable broadband public safety network has been proposed, using the “D block,” a chunk of the 700 MHz band. This spectrum has historically been used by television broadcasters, which they will no longer need after switching from analog to digital broadcasts. Earlier this year, the FCC outlined a plan to auction the D block to the private sector, which has caused controversy, draft legislation, and a flurry of lobbying efforts by public safety officials and trade associations.

The FCC plans to auction the D-Block of spectrum to commercial providers and use the proceeds to fund a broadband network that will enable emergency personnel to communicate across the country, regardless of local jurisdiction. The Fraternal Order of Police and the International Association of Firemen support the plan, while groups like the Public Safety Alliance would prefer the D-block be directly allocated to first responders, with sufficient government funding to build and maintain the infrastructure.5 The FCC contends that it will accomplish the same goal and will be funded by private wireless providers as they build their own commercial networks, rather than local governments. Whether you agree with direct allocation or funding a network through private auction, everyone can understand that a channel for all emergency personnel is needed.

In a July letter to the committee, the FCC wrote, “[a] broad framework for interoperability is essential to ensuring that this network is interoperable from day one and remains so as the technology evolves. The Bureau staff believes that interoperability can be achieved and maintained only through a combination of technology standards, license conditions, network governance, funding conditions and regulations. If any of these factors is missing, interoperability will not be achieved. ” They’re right, and we can only hope it doesn’t take another twenty years for both the standards and the network to be in place for our first responders. Lack of interoperability is bad enough when we’re talking about running a company. When it comes to public safety, interoperability could mean life or death.

Unfortunately manufacters still vary the standard P25 to keep lock-in a possibility. Ask North Carolina the number of radios from Kenwood, EF Johnson, and Motorola they have on their VIPER system. I'd guess that a high percentage (over 97%?) are Motorola radios with the rest being either Kenwood or EF Johnson. I don't remember but one of those manufactuers of P25 equipment couldn't operate on the Motorola P25 network. Go figure.

Also, unless a truck load of money becomes available, paying several thousand dollars for a portable radio that is P25 capable will never work in poorer local governments when they can buy a VHF or UHF radio off of eBay for a couple hundred.

Will it be open network?