Open data should be for justice

These are my reflections on CityCamp Minnesota 2013, which occurred at St. Thomas in Minneapolis on November 9, 2013.

What was it, and what worked well?

CityCamp MN 2013, hosted by Open Twin Cities and E-Democracy.org, was an event for civic hackers, open data nerds and advocates, and social justice-minded individuals in the region. Saturday was an open space technology-style unconference event. It was brilliantly planned. While I’ve never been to an unconference before, I was impressed by the way it generally fostered a sense of community, conversation, and connection. This stands in opposition to most conferences I attend (and that is a pretty decent number), which primarily serve to foster a few connections in the hallways between tedious and oftentimes irrelevant-to-me presentations.

Instead of that, the day began with a keynote that was a brief introduction and inspiration. This was followed by 5 minutes-or-less Ignite-style presentations to the large group. During these presentations, the organizers went to another room and tried to organize all of the topics that participants had proposed—either before or at the event—for conversations. Without knowing what I was getting myself into, I proposed a topic on "Racial Justice and Open Data.". When they posted the schedule, it turned out that I was leading a session on a topic something like this (I think it ended up being "Open data and communities of color") with two other conference attendees who had proposed similar topics.

Being unprepared for the conversation, our 45 minutes together wandered through introductions and eventually focused on a conversation about how public data could be used to advocate for employment opportunities for communities of color around municipal development sites. My perspective was that we could use public data to document the ways that these employment opportunities often are not given to members of the community adjacent to or containing the development site. While we didn’t get very far on this topic, many participating (myself included) seemed interested in exploring it further. 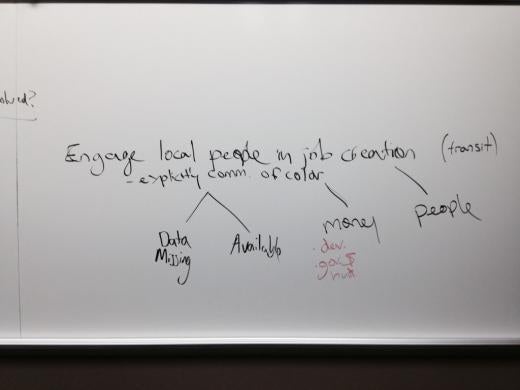 My primary takeaway from this and other sessions is the connections I made with other attendees. Some I knew by name only, because of their reputation or public profile, and I sought them out to meet on common ground. Others I bumped into along the way because of shared interests. While this does sometimes happen at traditional conferences, it tends to happen with only a few people. Here, almost everyone I met shared interests of some sort with me.

One frustration was that the sessions were too short to really get into meaningful and deep conversation. The topics, because they were all proposed and decided on by participants, were quite relevant, but also pretty broad. When sessions were combined to accommodate more than one leader, they typically peeled off in a direction that didn’t interest all of the participants who attended because of the name of the session. Were I organizing such a conference, I’d consider either dropping some topics, having individuals vote for some topics, or just have all of the topics have a session and see who shows up. If there were a little more time for each session, there’d be time for some groups that had few show up to merge into another group. At least then the topics would be clear beforehand. Further, some sessions were treated as workshops or problem solving for particular ideas, while others were more general and wandering conversations. In a future unconference, I’d like to see sessions organized not only by topic, but categorized by type. Is this session going to workshop on a particular issue? Or, is it meant to bring a broad conversation to light?

These are minor gripes, picking and prodding, ideas that would make such an event even better for me in the future. Because on the whole, this event was fantastic. Easily one of the most joyful and useful conferences I’ve ever attended. 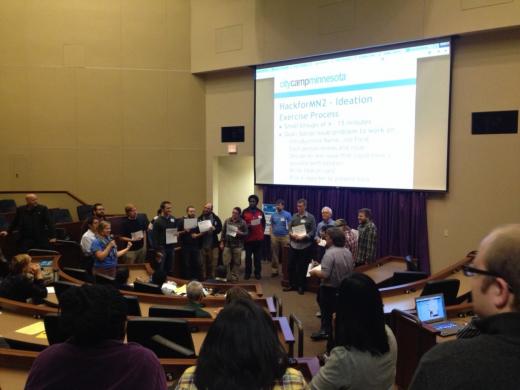 My bigger challenge is with the title, topic, or orientation of the conference itself, and of the #opengov (open government) movement as a whole. My challenge is that cities/nation states have always been exclusionary places: socially, culturally, racially, economically, and bureaucratically. This means that their governance has always included some while excluding others. And it has always been the case, since the founding of this country, that the politically powerful and the economically powerful have almost always been well associated.

It makes me wonder, in the words of Sandy Grande, the degree to which the #opengov movement is part of the "whitestream"—the assumed and often (for white people at least) unconscious ways that what is "white" also becomes what is "mainstream." On the whole, are #opendata and #opengov yet serving communities of color? Are they fighting oppression, wherever it lies?

While a few are (and some at the conference were) sincerely working to take this fight on (and many might see themselves as wanting to be part of this fight if the invitation were made and pursued), I think many see improving information about electoral politics or using crime data to make maps about arrests as prime examples of the power of #opendata. Honestly, I see these as working in service of electoral, political, and legal systems that are themselves deeply racist and sexist, deeply oppressive and unjust. While more electoral information is probably a relatively neutral thing, crime data about arrests really serves to further the perspective of law enforcement, not the perspective of communities of color. These communities, oversurveilled and often guilty until proven innocent, often have a very different perspective on crime data as the documentation of state repression and oppression. It is data that furthers what scholar Eve Tuck calls a view of the community (from outside and sometimes even inside) as damaged and broken.

What’s necessary, in my opinion, is to drive a wedge in the cracks of legal and government bureaucracies, to pull them apart at their seams, unwinding them slowly but surely. Perhaps we will rebuild them, because, together, we determine that in some form or another, they are useful to us. But I’m not sure I find it valuable to focus on that right now. Instead, I want to be part of their undoing. And I believe that #opendata and #opensource tools can be used as part of that work. The work is to use these forms of data to question, judge, undermine, challenge, and transform oppressive institutional structures.

To continue with the example of crime data. The question, for me, cannot just be: map crime in communities to make them safer. We also need to ask: how did we choose to police these crimes, instead of other crimes? Why did we choose to prosecute the person who supposedly stole a TV, rather than the persons who swindled the American public and the U.S. government out of billions of dollars because of poor and unethical decision-making (and yes, as far as I know, no criminal charges have been brought against most or maybe even any of the folks involved in the financial collapse that lead to massive foreclosures and unemployment for the poor and middle class in this country)?

Why do people of color constitute the vast majority of arrests and prisoners in this country (and even in our state)? What actually counts as a "crime" or not a crime? How are we judging that? Who are making these judgments, and what is their background, their bias? If we take a perspective that looks at the government as though it is operating on our behalf, we are part right: it tends to operate on behalf of the wealthy and powerful, often times who are white and male. But those of us working in #opendata and #opengov need to be thinking about perspectives that are more inclusive. These are often (not always, but most often) very distinct from those of government. And that’s where I think our work should start.

Only a few of the projects/sessions yesterday approached this work deeply from this angle. There are no positions of neutrality in the fight for equity and justice. So, I advocate for my colleagues and friends in the #opendata and #opengov movement, let us put this data to use in ways that seed change in the status quo, that disrupt it, that call it out, that speak a different sort of truth. Let us approach governments, police, and other forces of society as the center and, at least some of the time, in every project, adopt positions from the margins that look at the way the center is exclusive and destructive. With that in mind, perhaps our next meet up can be a different sort of camp, one that examines issues from the perspective of uncovering and documenting systems of oppression and repression in the hopes of and service toward their eventual transformation.

I’m curious what thoughts others have?

Alexander Fink - I am Ph.D. Student at the University of Minnesota in Youth Studies and Social Work. My work focuses on making research for documenting injustice and resistance accessible and available to young people, through history and today. I works to build tools, advocate for access, and co-develop processes and trainings with young people to enable research for advocacy and activism for social justice. My research examines historical and present social movements and forms of radical resistance to...
More about me