I frag better than you, and I do it in Linux* | Opensource.com

I frag better than you, and I do it in Linux*

I learned two things today. OK, let's hope that in a full day of Ohio LinuxFest, I learned more than two things. But these are the two relevant to this post:

1. People are still having LAN parties, even the Internet-disconnected kind.

This morning when I walked down the conference hallway, I saw two tables of machines set up. When I got closer, they were clearly gaming. Maybe I'm just hanging around the wrong crowds these days, but that was the first LAN party I'd seen in years. I really thought they'd gone the way of the dodo as online gaming became easier and more popular. Blizzard definitely thinks so--they don't even support LAN gaming in Starcraft II.

But it does still exist, and Kelly West of lanville.org gave a talk titled "Reaching Out With... Video Games?" It makes perfect sense here--modern video games are largely community-based, just like open source. Even games that seem on the face like single-player games often have an option to play online. And every game system and game company has its own network.

West's talk described how gamers, specifically Linux gamers, can give back to the Linux community first by appealing to those who don't know that gaming on Linux is an option.

Her main point is that the outreach starts with you, the gamer. When you're in a game, talking on the server, in between calling someone n00b and shooting somebody else, you can bring up that you're playing on Linux. Because although you know you can (well, perhaps now you do having read this post), a lot of other people don't know that they can. You have the opportunity to help them get started.

Then the step beyond your own PC is going public--go to a LAN party. There people walk around and see for themselves that you're gaming on Linux. Think locally--you don't need a fancy $3,000 server to get it off the ground. You can even try setting up a party through your LUG or at a friend's house over the weekend.

West also mentioned that while venue isn't a big deal, other than having enough room, the available power is. Remember to check the network before you're in the middle of an intense fight and everything goes down. It sounds funny right now because you're not the one it's happening to. It won't be funny when it is. Check your power, and check your networking and cables.

West said that the Lanville.org parties have grown in six years from one floor in a dorm to upwards of 70 people coming from all over the state. Even people who don't play tournament games come to play World of Warcraft sitting next to someone else. And that itself proves community is important. It's just a little something different from sitting at home playing alone--even if you're never really playing alone.

The Lanville.org parties are now not only self-sustaining, thanks to a $15 fee, but they have some money left over. So what they do now is use that money to do things like come to conferences--say, Ohio LinuxFest--to spread the word even further. Leftover money from your parties also gives your group the opportunity for charity donations, and what better than a gaming-related charity? West suggested Child's Play, a charity that sets up wish lists of gaming equipment for kids in hospitals.

Sounds to me like it's time for a resurgence in LAN parties.

Lanville.org has recently been relaunched, so it's lacking somewhat in content. If you're wondering exactly what games you can play, there's a placeholder for that list, so check back. They welcome event listings and hope that in the future it will become a community. You can keep up with their progress on Twitter or Facebook. 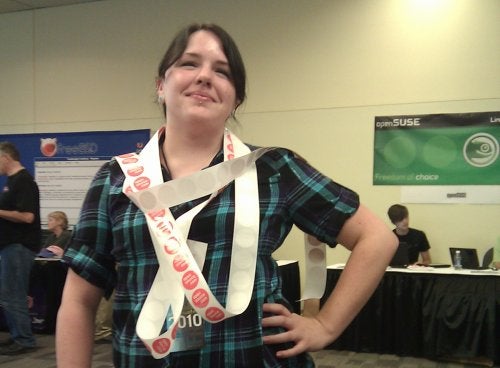 *The title of this post is a quote from West's talk, not about me. I probably don't frag better than you.

I liked her style. For me, linux lovers and contiributers are real heros.

Linux is very comfortable os to use the application.
And as compare to windows and mac os it is very fast....

where in the article is anything about "frag"?
as in: fragment; defragment; to shot or kill; to shred; chards of an explosive; coral farming; bad management; what? What is its significance to the resurgence of LAN parties. Not all games are violent so why is it significant that quote "I frag better than you" is relevant. The author attributes the phrase to K West, but not how it ties to her article or to open source. So why reference secret knowledge?

"in between calling someone n00b and shooting somebody else, you can bring up that you're playing on Linux"

The idea is that you could say the phrase from the title as a way to let people know you're gaming on Linux.

Ive had Unreal Tournament Game of the year Edition for linux for about 8 or 9 years now, and a good handfull of games play well in wine from what ive seen.

fragging in linux is easily over a decade old.

have u ever saw an angry penguin?