Phase 1 Garage: The next generation of entrepreneurship | Opensource.com

Phase 1 Garage: The next generation of entrepreneurship

Today the ribbon was cut on 2,000 square feet on NC State University's Centennial Campus where ten students have set up their projects in the new Garage, an incubator for student engineers. Spaces with names like Brainstorm Room, Idea Meeting Space, Hobby Shop, and Designer's Workshop are home to mechanical, electrical, and woodworking spaces with whiteboards, a small library, and a kitchen space to nourish the next generation of entrepreneurship.

At today's open house, many of the students--all undergraduates--set up their projects for display and talked about what they're working on. Andrew Misenheimer deminstrated his team's SPARK project, a prototype electric supercharger intended to provide a cheaper, safter alternative to putting more power in a motorcycle without adding weight. The alpha prototype will achieve 120 hp from an engine that normally produces 98 hp, and the beta prototype will achieve 160 hp. 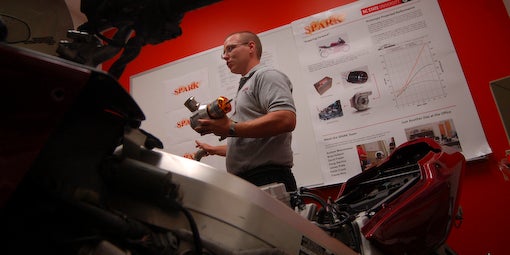 Steven Chua, David Haupt, Adam Litowsky, and Ishan Patel have developed the writeidea system as a classroom alternative to expensive smartboards. The pen, a prototype of which is pictured below, works with a camera, projector, and laptop to simulate the smartboard experience. Students can draw, drag-and-drop, and generally use the pen much like a mouse. I asked the team if they had considered open sourcing the plans for the system to let a classroom build its own tool, and they said they had considered that as a solution to the challenge of how to overcome the challenges of both cost and encouraging technology adoption with reluctant teachers.

Angela Hollen, a student in the College of Textiles, is working on Spitter Spatter, a line of infant and toddler clothing using performance fabrics. She said that even as the business plan approaches the need for further outsourcing, she intends to keep the manufacturing within the United States if possible and definitely within North America.

The current space is considered Phase 1. You can learn more about future plans for the Garage at ncsugarage.com.