Did the SOPA blackout work? (And was it really a blackout?) | Opensource.com

Did the SOPA blackout work? (And was it really a blackout?) 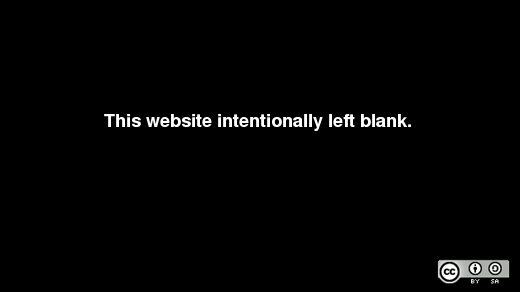 Yesterday I posted screenshots of 127 websites that “blacked out” to protest the SOPA and PIPA legislation before the US Congress. Another site I came across reported that 7,000 sites had gone black. There was no citation, but I believe it if you include every blog that WordPress enabled to automatically go black and if you count all of those sites I posted screenshots of as “blacking out.”

That is not to say that the blackout had no effect (I’ll get to that in a minute). But the only site I know of that truly enacted what I would describe as a blackout is Reddit. Despite the many confused Wikipedia visitors (chronicled humorously by @herpderpedia), Wikipedia didn’t really black out. Not only did Wired and The New York Times give instructions early in the day on circumventing the blackout, Wikipedia did as well.

Most sites didn’t even go as far as Wikipedia’s more-or-less blackout. The most popular version seemed to be the Google version—black out your logo, or put up a splash screen that mentioned opposition to SOPA.

Nevertheless, the very visible protests did a few important things:

South Carolina Senator Jim DeMint tweeted, “I support intellectual property rights, but I oppose SOPA & PIPA.” This seems to be the new position of a lot of former supporters. In alphabetical order, some of the Congresspeople who changed or withdrew support for the two pieces of legislation are:

Senator Patrick Leahy, a PIPA author, continued to support his legislation, saying that those protesting it were “just wrong,” and that those who blacked out wouldn’t have been affected by it anyway. He was joined in the sentiment by many remaining sponsors of both bills, including House Judiciary Committee Chairman Lamar Smith, SOPA co-sponsor.

Wikipedia reported that during the blackout, its site was viewed 162 million times with eight million people following through the instructions to contact their legislators. The MPAA called the blackout an “irresponsible stunt” and “an abuse of power.”

Mark Zuckerberg found the occasion notable enough to tweet for the first time in almost three years: “Tell your congressmen you want them to be pro-internet.”

Despite the lack of true blackout, the movement was effective. We’ll see how effective in just a few days—PIPA is expected to meet a vote on Tuesday in the Senate.

Memo from the Dept. of Underwhelming:
“Tell your congressmen you want them to be pro-internet.”

Um, yeah. Right, Mark. While you're at it, let them know you don't vote, either. Ought to realllllly get their attention ... <strong>Not</strong>. Those calling their representatives need to be direct and concise, e.g. <em> "I'm calling you regarding the upcoming vote for SOPA/PIPA. I'm a constituent of yours. I am deeply concerned about this proposed legislation. If you vote in support of it, I will vote against you in the next election. Clear enough?" </em>

I continue to be disturbed that media groups that represent vendors of media, for whom we are all customers, spout tut-tut trivializations like, "just wrong," "irresponsible stunt," "abuse of power," etc. Um,... exercising our free speech rights, and communicating with our elected representatives, is NONE of that. And we're not just citizens. We're voters. Clear enough, Mr. Leahy?

And we're customers. I'm still boycotting Sony (all products) over that rootkit "stunt" a few years ago, it wouldn't take much for me to cease buying other conglomerates' wares. There are plenty of really neat products out there chasing my dollars, I don't have to send them to sellers who hold my citizen's rights in such contempt. RIAA and MPAA mouthpieces should be more judicious in how they rebut public response to their lobbies attempts to redact the Bill of Rights.

Great article, but could you please stop put the CC-BY-SA icon on the phrase "This website intentionally left blank". You copyright (and their therefore cannot copyright licensed) a phrase like that, it <a href="https://en.wikipedia.org/wiki/Threshold_of_originality">too simple</a>.

I think is time for us to shut those Who pulled support.

I had no idea of the blackout, I don't use those website. Wikipedia is not a credible source of information so that was a bust. Wired is just propaganda for people merely interested in technology, so another bust.
NYTimes is another propaganda spinner, bust.
Lamar Smith is a cowardly puppet, just listen to him babble in any televised hearing.
You want to make an impression for people, take down the congress critters websites who are sponsors of the Bill.
Otherwise, those websites that participated are subliminal and ineffective for the goal if you want credibility of purpose.

@ pamasaurus
You said:
<strong>I had no idea of [about] the blackout, I don't use those website[s].</strong>

By your own words, you have undermined the credibility of your posting.

The question of Wikipedia's credibility, or the credibility of the NY Times and Lamar Smith, is similarly wide of the point.

The actual point of this article was that a great many people either already knew - or found out about - the SOPA / PIPA legislation, and were concerned enough to make their voices heard. And they were heard loud enough to make Congress stop and think.

You also said:
<strong>Otherwise, those websites that participated are subliminal and ineffective for the goal if you want credibility of purpose.<strong>

When you talk about something "lack[ing] credibility of purpose", you'd better be talking about <strong>CONGRESS!</strong>

Now I agree with regard to the war being "won". It isn't, not by a long shot.

At best what we see here is a strategic withdrawal, waiting for the time when they can sneak this in as an "amendment" or "rider" to some other bill that has no bearing on this topic whatsoever.

<cite>Wikipedia reported that during the blackout, its site was viewed 162 million times with eight million people following through the instructions to contact their legislators. The MPAA called the blackout an “irresponsible stunt” and “an abuse of power.”</cite>

LOL, because bribing Congressmen isn't an abuse of power, and threatening them on Fox News isn't an irresponsible stunt? I think I hear the kettle calling, MPAA.

You said:
"The MPAA called the blackout an “irresponsible stunt” and “an abuse of power."

No, bribing Congress and Fox News threatening them IS NOT an abuse of power. As far as they (and CBS/NBC/ABC, et. al.) are concerned, that's merely "representative government". As in the "Golden Rule" - "The guy with the Gold makes the Rules"!

Of course, the MPAA and the RIAA (and BMI) are well known to be the staunch defenders of our personal liberties, so this all makes perfect sense when you think about it. Right?
(/sarcasm)