Why Cory Doctorow refuses to predict the future (like, seriously)

Cory Doctorow on influencing the future instead of predicting it 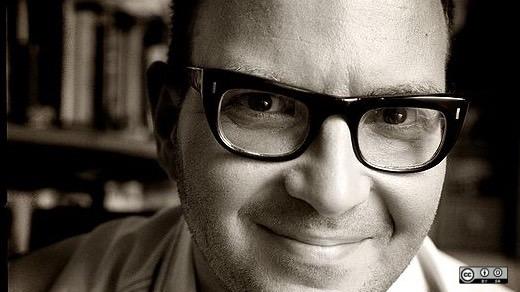 Cory Doctorow is good with words. He just prefers stringing them into sentences, not subroutines.

"I was a software developer," he says. "I'm much better at writing science fiction novels. Like, seriously."

When Doctorow takes the stage at the 14th annual Southern California Linux Expo (SCaLE 14x) this week, he'll demonstrate exactly why he's decided to ply his considerable talents to prose, not code. Doctorow's talk, "No Matter Who's Winning the War on General Purpose Computing, You're Losing," starts at 9 a.m. PST in the Pasadena Convention Center on Friday.

"There's a certain efficiency to writing code," Doctorow says. "It can be a very powerful intervention. Look at the tiny number of people who hack on Tor, and the massive impact they've had around the world. That's the upside of code."

But writing code just isn't for him. One of today's most active, vocal, and recognized champions of digital rights, eschewing a programming career is rather striking. After all, if what Lawrence Lessig says is true—if, in the 21st Century, code is the fulcrum of power—then becoming a coder would seem tantamount to Doctorow's interests, what he calls the intersection of "technology and liberation."

But Doctorow doesn't want to be a coder. He wants to inspire them instead.

"If you want to influence what coders do, there are lots of ways of doing it," he says. "Many involve giving them a lot of money. But another one is firing up their imaginations."

And that, Doctorow says, is his stock-in-trade as both a journalist and a science fiction author: an affinity for grappling with the complexity of a rapidly changing world, helping others sort it—and encouraging them to change it.

"A science fiction writer makes these thought experiment worlds, where you pluck a single technology out of the world, and you magnify it, so that it's the only force acting on that world," he says. "And you produce something that's like an emotional version of the architect's fly-through. You render the emotionless external reality of living in that world, and then you let people have considered emotional and intellectual opinions about whether or not that world is the world they want. And it gives them ammunition with which to argue about the direction things are going in."

Just don't call it the power of prediction. To Doctorow, science fiction's value lies in its ability to bring about possible futures, not merely guess at what might be; it's prescriptive, not descriptive.

Channeling the collective uncertainties and creative energies of those busy architecting the future is Doctorow's principal aim. And he's moving them toward a singular target: a free, fair, and open Internet. The Internet's destiny, he maintains, is inextricably tied to any other battle imaginable.

"If the Internet is not free, fair, and open, then our ability to effectively address climate change, or economic injustice, or racism, or what have you, is severely curtailed, if not made impossible," he says. "Although the Internet might not be the most important fight we have, it's going to be the foundational fight.

Doctorow might not be interested in predicting the future, but he certainly seems sure of at least one thing about it: we must build it the open source way. His fiction underscores just how vital principles like transparency and collaboration will be to keeping it just and equitable. At SCaLE 14x, Doctorow says, he wants to stress this, especially to kindred spirits—those with little interest in coding.

For Doctorow, open source isn't a purely technical consideration. It's a comportment in the world—one he hopes will become a kind of default. Historical analogs abound. For example, Doctorow says, take science and alchemy. These two practices share similar intent (knowledge acquisition), but their orientations toward it differ radically.

"The difference is between the alchemist and the scientist is that the alchemist never tells anyone else what she's learned," he says. "And the scientist isn't doing science until she tells everyone around her what she thinks she's learned. And open source is to proprietary technology what science is to alchemy. Alchemy still produced stuff. People learned stuff with alchemy. But they didn't do it well. And this is why every alchemist discovered for herself, in the hardest way possible, that drinking mercury is a bad idea."

In this very spirit of openness, Doctorow spies a blueprint for the best possible world.

"If someone came into your building and said 'I'm going to build you a lecture hall and I'm going to add steel joints to the ceiling to hold the ceiling up and keep it from killing everyone in it who will hear me talk at SCaLE, and I'm not going to tell you the math that I'm going to use to tell you whether or not the ceiling will fall down,' then you should not buy a lecture hall from those people," Doctorow says. "If someone says 'I'm going to build you a 21st Century civilization, but I'm not going to show you the code that it runs on,' you should not buy a 21st Century civilization from those people either."

Futures may be hazy and unpredictable, even to a science fiction author. But that's just another way of stressing their ultimate indeterminacy. Our future is always the product of those jockeying to inspire its construction—and for Cory Doctorow, openness represents the best path forward.

At SCaLE this week, he'll prove it. Like, seriously.

Is the cloud right for you? 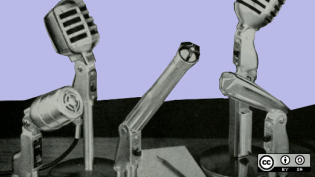 Why it's important to get kids into public speaking

I wish I was in California...

Love the analogy with science/alchemy and proprietary/open source code. It really brings it home in a way that I hadn't considered before.

Great interview, thanks! I now wish I was going to SCaLE for a whole new set of reasons!