Poll: How do you abbreviate system administrator?

Poll: How do you abbreviate system administrator?

Friends, I have sad news. This week the editors of Opensource.com decided to make a small—yet painful, at least to me—change to our official style guide. Going forward, we will treat "sys admin" as "sysadmin." I'll admit that a little piece of me died as I updated our style guide, reluctantly removing the space between sys and admin. My teammates shook their heads and offered no sympathy. One of them sighed and said, "That's the way the rest of the world does it, Rikki." Eyes rolled when I gave him my best stink eye and responded between clenched teeth, "But THEY ARE WRONG."

Having started my career as an editor on Sys Admin Magazine: The Journal for UNIX and Linux systems administrators, I had my pen planted firmly in the "sys admin" camp. I'd already lost the "systems administrators" vs. "system administrators" battle long ago (even though we all know that sys admins ... err, excuse me, sysadmins, as the kids say... manage multiple systems), and I'd eventually been dragged over from the UNIX camp to Unix. But I continued defending "sys admin." Until this week. My colleague pointed out that only ADMIN Magazine (i.e., my former colleagues at Linux New Media and Sys Admin Magazine) uses "sys admin." Even Google has weighed in on the debate, albeit on the wrong side. 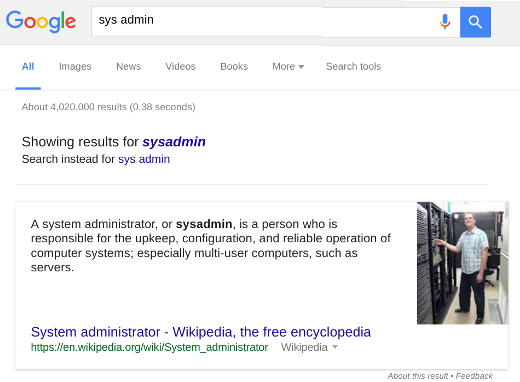 Still, I won't go out without one final, public fight. My fellow Opensource.com editors agreed that we can revert back to "sys admin" on one condition—if it wins in our reader poll. So what will it be? Will sysadmins get the big squeeze? Or will sys admins get the space they deserve?

The English language is not written and approved by a committee. It is a living language, adapted and remixed every day as it grows and changes to find new words to describe the reality that we live in. There are a few rules, but functionally, they're more like guidelines. In practice, changes to the English language arise like open source software. New words and phrases are formed around the globe in a distributed way, and a few organically float to the top to emerge as a part of our common vernacular.

When I play the role of writer or editor, I have a responsibility to meet my readers more than halfway and to adapt my writing to speak to them. It's not that I never break conventions when writing, it's that when I do, I always try to have a philosophical reason for my choice, and not just that I like my way better.

And so, I simply see no reason to fly in the face of the masses who have clearly adopted sysadmin as their preferred abbreviation. The debate between "sysadmin" and "sys admin" is not philosophical like GNU/Linux versus Linux, nor free software versus open source. It's a space with no meaning that the world has left behind, and so should we.

Dan on 28 Jul 2016 Permalink
I've been using "sysadmin" for as far as I can remember, and I started in the business in the last millenia :) I'm not a native speaker, though, so YMMV.

Ben Cotton on 28 Jul 2016 Permalink
Dang! Baker got all philosophical on us.

Jon "maddog" Hall on 28 Jul 2016 Permalink
Rikki, In the days of POTUS and SCOTUS, you look for the respect that a Systems Administrator might get by having their job position spelled out instead of jammed together? Pardon me while I go to my meddoc for my appointment.

Tom Durand on 28 Jul 2016 Permalink
I would abbreviate even further to "SysAdm" which is shorter and more accepted today in the industry.

Ben Cotton on 29 Jul 2016 Permalink
No, it's the server that's sad: https://twitter.com/sadserver

nonya on 01 Aug 2016 Permalink
BOFH (Bastard Operator From Hell) Sorry, just had to throw that one in!

Cory Hilliard on 01 Aug 2016 Permalink
Well I can't offer you any sympathy, because when I was a sysadmin, I was known by these: 1. Mr. Techie 2. the geek in the corner 3. the guy that runs things with electricity 4. the IT guy... Or when things got really bad for someone it was just: 5. COOOOOORY WHAT THE **** IS WRONG WITH THIS THING!!!

dgrb on 01 Aug 2016 Permalink
There should be a poll option for "other": my friend Ian, while at Birmingham University in the 1980s, coined the term "systhug" which has always struck me as le mot juste.

I wrote this on 01 Aug 2016 Permalink
It's sad that since hacker came to mean cracker, there's no longer a word for hacker. But the sysadmin sys admin thing means nothing. At my work I abbreviate System Administrator to "me".

tbuskey on 02 Aug 2016 Permalink
The first time I was unemployed (1990-1992?), the unemployment office couldn't find system administrator or any variation of it. They gave me a book to look through that didn't have it either. I don't really care *how* its spelled now as long as they know about it.

Datavar on 09 Aug 2016 Permalink
I've used 'sysad' since the late 80's and don't much care for any variation of sys admin. Just doesn't feel right. Stuck in my ways I suppose.

Brent Saner on 09 Aug 2017 Permalink
I generally prefer "sysadmin" because: 1.) it's a better conversational flow if you pronounce it as one word 2.) *nix doesn't like spaces [root@dawid tmp]# groupadd sys\ admin groupadd: 'sys admin' is not a valid group name it just doesn't work, you see. ;)