Learn about the development of the Open Smart Grid Platform

After energy balancing software PowerMatcher was released as open source at Alliander in 2014, I was able to convince more of my colleagues to invest in making more technologies open source. I started the conversation with a question about the Open Smart Grid Platform: "How open is open? Where can I find the code?"

The development of the Open Smart Grid Platform started after research was done on how to give municipalities control over their public lighting switching schedule. This schedule is based on ecomomic sense, and is a list of rules for when to switch on and off the street lights. For example, streets lights switch off ten minutes after sunrise. The previous process was based on ripple-control technology, which was controlled by the local utility. Research at the time showed that existing solutions were silos, with vendor-lock-in and large matching costs. So, a team started developing the Open Smart Grid Platform as a way to allow municipalities to set their own switching schedules.

One challenge power distributuon companies face is that the current electrical grids are always trying to incorporate a growing number of renewable energy resources. To make sure that the energy grids run reliably, a growing number of sensors are placed in the grid to alert us before problems arise. These additions also help reduce the outage time by locating the fault position faster. Smart meters are an example of such sensors; they use voltage and current to measure the electricity flow. Smart meter information could also be used to measure what your electricity bill should be.

The Open Smart Grid Platform is an open, generic, scalable, and independent Internet of Things platform that enables municipalities and power distribution companies to easily control and monitor various public service objects with any application and with any communication infrastructure. It acts as a connecting link between web applications and smart devices, and it was built with utility requirements in mind (a strong security focus, reliability, use of international standards, etc). The platform was also built to fit with multiple use-cases from the ground up; it contains generic functions that are needed for managing and controlling a large number of devices, like authorizations, time synchronization, and configuration management. 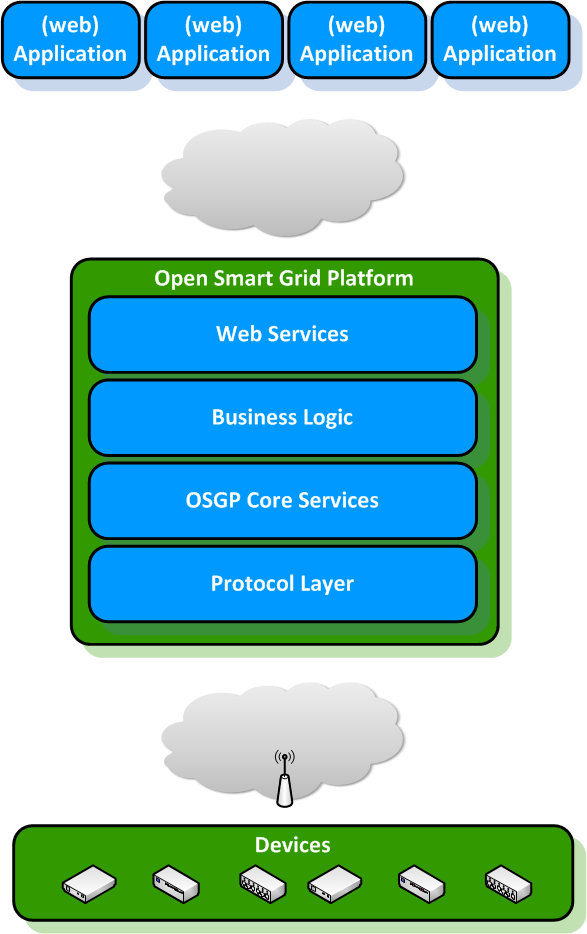 We recently invested in better documentation and a Vagrant script to make it easy to start experimenting with the Open Smart Grid Platform. We extended the use-cases beyond public lighting to include smart metering, micro grids, and load management. And we believe there are many other use cases for the technology.

Today, energy producers want to exchange energy with consumers in their neighborhood. Micro grids could be the answer. They are small and based on electricity production and consumption. Load management kicks in when there is more production then consumption (or vice versa) and allows for the user to switch relevant consumption and production units on and off when needed. They are helpful in remote areas as well.

Alliander is an energy network company that serves a large part of the Netherlands. The existing development community consists of Alliander-related organizations: the Alliander start-up company Smart Society Services, the DSO Liander, subcontractors, and partners. The group aims to co-develop the platform with more grid operators and other public infrastructure operators because these organizations have similar issues and requirements and could all benefit from the platform becoming more advanced and having a larger ecosystem.

Sander Jansen - Sander Jansen is working at Alliander, a Dutch power distribution company. At the digital grid department he takes a role as data architect and helps Smart Society Services with their open source strategy. Being a strong open source believer, Sander promotes the use of open source within the energy world and helps setting up open source projects. He is convinced that open source makes the energy grid more reliable, innovative, secure, flexible and sustainable, all resulting in a lower cost for...
More about me