I've got 99 problems but Linux ain't one

I've got 99 problems but Linux ain't one

As the global technology evangelist director of Red Hat’s portfolio product marketing group, I have a secondary focus on portfolio architectures. I research customer successes in solution implementation using our open source technologies, then produce generic higher-level architectural content so that others may benefit from these real-life experiences.

If that sounds kind of heavy, it all started innocently enough with my studies at Vrije University in Amsterdam, the Netherlands, where Andrew Tanenbaum was teaching networking and operating systems. Most people in our business know that Tanenbaum developed MINIX as a teaching tool, and he got into a bit of a flame war with Linus Torvalds when Linux first hit the scene.

While doing practical programming exercises for my operating systems course in 1998, I was not able to install MINIX at home, so that led me to install Linux on my laptop for the first time. I quickly understood that there were no problems I couldn’t troubleshoot; there were always logs to dig into and more information to discover. The code was available for exploration and fixes could be applied. I was hooked.

My interest in programming grew at university, and I studied Java, Python, Bash, Prolog, Lisp, C/C++, Modula2, PL1, Ruby, and just about anything else that crossed my path. In my third year, the Y2K problem was looming, and many IT companies were hiring students. I took a part-time job at IBM, which offered to pay for my classes while I worked on various projects. I also founded the first Linux group at IBM Netherlands, as that year IBM started supporting Linux on all platforms. I also worked on a Redbook called Linux on S/390 (now known as the Z Series mainframe).

Deciding that it was time to get back to in-depth programming, I took various roles at smaller software development companies during the final years of my studies. One of these led to a role doing scientific programming and teaching at several Dutch universities. In all of these roles, I focused on open source languages, libraries, and projects.

One project that particularly fascinated me involved pushing the limits of Bash. There is a Linux distribution called Source Mage Linux that manages source-based builds on your machine (imagine installing your machine from source and building everything optimized to your specific hardware) using a package manager built solely using Bash. I started out submitting patches, then owned a section of packages, led the package manager tooling, and finally spent four years as project lead.

When I felt I was hitting the limits of desktop development, I moved on to a financial institution, building enterprise solutions using JBoss technologies like jBPM, Drools, and JBoss application platforms. It was natural for me to continue pushing changes back to the community and to participate more and more in jBPM. Within two years, Red Hat recruited me for a solutions architect position for Europe, the Middle East, and Africa. I now work full-time on open source, in exactly the culture and environment that has always held my heart.

A quick overview: After three years working as a solutions architect for JBoss middleware in EMEA, I moved to the middleware business unit as Red Hat’s first technical marketing manager (TMM). About four years later, I moved over to the platform side, focusing on solutions like Red Hat Cloud Infrastructure and Red Hat Cloud Suite. Along the way, we captured best practices and set up the Red Hat technical marketing managers’ practice, where current and newly hired TMMs can find templates and examples and share their experiences at monthly gatherings.

Sharing and open collaboration has been a constant thread throughout my career. Anyone with knowledge to share can be a teacher, and it’s a great way to give back to the community. I have shared my journey and my knowledge on my blog, through videos on my YouTube and Vimeo channels, in books on various technologies, and in presentations all around the world. My goal is to help others become more successful in their daily lives.

To me, open source is more than a term; it encompasses more than code. It’s a way of life. It’s about sharing what you know, mentoring those around you, and enjoying the success of teams you collaborate with. Above all, open source is something that you take with you everywhere you go. It’s up to you to create an open culture of sharing at your organization.

With IT enabling you to work almost anywhere, why would you choose an environment that is not open?

Eric D. Schabell - Eric is Red Hat’s Portfolio Architect Director. He's renowned in the development community as a speaker, lecturer, author, and baseball expert. In his current role allows him to share his knowledge of Red Hat’s open source technologies and cloud computing. He brings a unique perspective to the stage with a professional life dedicated to sharing his deep expertise of open source technologies and organizations. Follow on www.schabell.org.
More about me 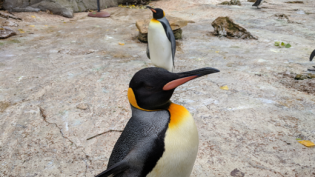 How did you get started with Linux?

Great name for this post. My journey was different than yours, but
I can gladly say that Linux is not one of my problems!