An open source software's (OSS) sustainability relies on passionate developers willing to contribute to the project. Therefore, a project's survivability depends on its ability to retain developers, onboard new ones (i.e., newcomers), and, maybe more importantly, create a community of users who promote its adoption and use.

As OSS projects grow, contributors tend to organize and create communities to drive the development process. However, many projects lack formal models, especially governance models, to structure and manage the (potentially large) community around them. Support to deal with all kinds of organizational decisions (including legal and economic aspects) is a huge concern for all projects. In fact, I previously reported some results on transparency and governance models from the top 25 starred projects in GitHub. In a nutshell, the results were encouraging, but a lot of effort is still needed.

In other domains, nonprofit initiatives and foundations (either public or private) organize to provide the legal and economic infrastructure for a community. They can also define a number of internal regulations regarding, for instance, the activity, membership, and decision-making process for nonprofit and non-governmental organizations.

Similarly, in recent years, there have been a number of foundations created around OSS. Software foundations are nonprofit organizations whose mission is to provide the grounds required for open and collaborative software development. They also provide a legal framework for individual volunteers and enable the donation of resources for the public benefit. However, there is a high variety among foundations, and information about their differences is scarce.

Take, for example, the Apache Software Foundation and the Linux Foundation, two of the most well-known software foundations. They follow different strategies for managing the projects they cover. While the Apache Software Foundation proposes a meritocratic system, where different committees control and drive the development of several software projects (and the board oversees the whole process), the Linux Foundation follows a flexible approach and serves as an umbrella for its projects, which can deploy specific development processes, and concentrates more on promoting the benefits of OSS.

As part of my research in the SOM Research Lab, I studied the different flavors of OSS foundations and their impact on the development of OSS projects. The goals are: 1) to give a clear picture of the current state of the art of software foundations, and 2) to help developers make informed decisions when creating new foundations or choosing to join an existing one. We built a dataset of 89 software foundations, which were analyzed according to their scope, openness, and influence on their projects' development practices.

To facilitate the query and understanding of software foundations in the context of OSS, I have recently published a website that summarizes the results of our study. 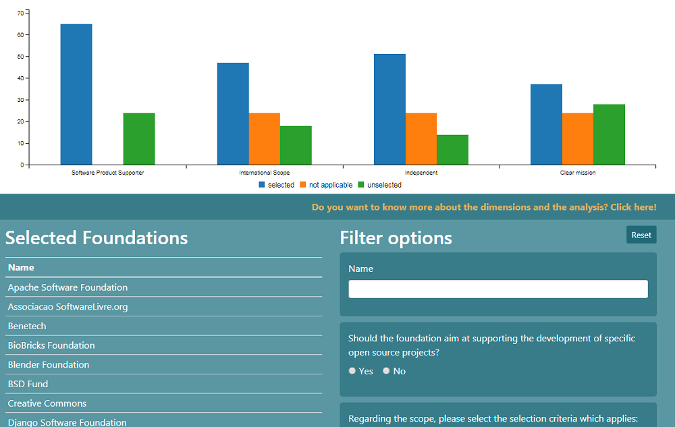 The website includes information about 89 software foundations, which are classified according to the following dimensions:

The website presents results in both a bar graph and a list, which can be queried according to a foundation's name or the above dimensions. Each entry in the list shows the selected foundation's name, status, and dimension values.

A deep analysis of the results also helps clarify the role OSS software foundations play in the development of OSS projects, as we explored in our research paper.

This work is similar to chooseafoundation.com, but we include a longer list of foundations. Even so, our list is not exhaustive and may include errors. I would like to keep it as updated as possible, so do not hesitate to send me an issue if you find any error or a missing foundation.

Javier Canovas - Assistant Professor and researcher at SOM Research Lab (an IN3 - UOC team at Barcelona), he likes investigating on how software is developed, in particular how open-source software is developed and how people collaboratively drives the creation process. He has been working mainly in the area of programming & domain-specific languages, modeling, modernization and model-driven engineering.
More about me

I'm really happy to see more great open source sustainability post like this. What are your thoughts about non-traditional foundations like Open Collective which allow open source projects to receive funding without the hassle of setting up their own legal entity?

Hi Justin, thanks for your kind words! Regarding Open Collective (and organizations of that kind), I really like the approach as they are helping towards a more open and transparent OSS ecosystem. If I'm not wrong, it's not exactly a foundation (from a legal point of view) but these kind of approaches promoting OSS project sustainability are always welcome (and needed, I believe)