In the world of software-as-a-service (SaaS) and service-based architectures, it's not uncommon for companies to maintain dozens or even hundreds of APIs, often spanning multiple teams, programming languages, and environments. This variability makes it extremely difficult to see what's happening at a high level to prevent changes from having negative impacts.

It's estimated that 40% of large enterprises struggle with challenges to secure, scale, or ensure performance for APIs. Because of this, more and more companies are choosing to adopt a "spec-first development" approach by defining and documenting APIs in an external format like OpenAPI. Storing these documents together in a central location makes it much easier to design, discuss, and approve changes before implementation.

In this tutorial, you'll use the recently released Insomnia Designer to document an API, explore it, and propose a change using a spec-first approach. Designer is a cross-platform, open source REST client that builds on top of Insomnia Core—a popular app for interacting with HTTP and GraphQL APIs—aiming to make spec-first development more accessible by providing collaborative tools to organize, maintain, and validate API specs. In essence, Core is best for exploring and debugging APIs while Designer is best for designing and documenting them.

In this how-to, you'll use the Open Library API as a base to have working examples to play with. You'll create a minimal OpenAPI spec to document the APIs, use Insomnia Designer to test and verify that what you've done is correct, and then make some design changes to the API using a spec-first approach.

Before you begin, you should understand the steps necessary to adopt a spec-first workflow. In spec-first development, a specification can be in one of two states:

From this information, you can define a workflow for making changes to an API:

Now that you understand the workflow for what you are trying to accomplish, open Insomnia Designer and start trying it out.

Since you don't yet have a published specification for the Open Library API, you need to define one.

Start by creating a new blank document from the Create menu, give it a name, then click to the document to enter Design View. From here, you can start editing your spec. 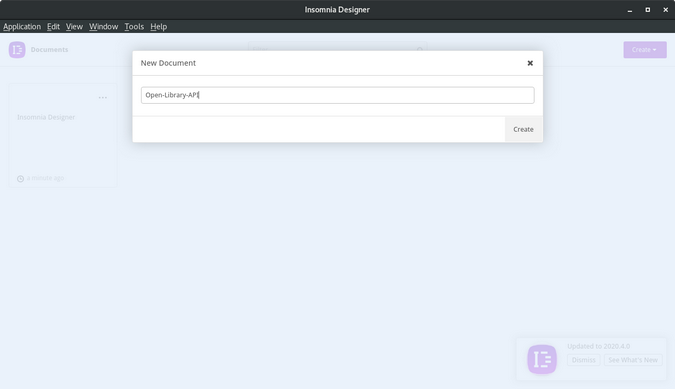 The OpenAPI spec is most commonly written in YAML format and requires four top-level blocks to get started: openapi, info, servers, and paths. The following example defines each of these blocks with helpful comments to describe the purpose of each. Also, the paths block defines a route for GET /recentchanges.json:

OpenAPI provides much more than what's visible here, such as the ability to define authentication, response formats, reusable components, and more.

After copying the specification above into Insomnia Designer, you'll see three columns: Feel free to modify different parts of the specification to see what happens. As a safeguard, Insomnia Designer alerts you when you've done something wrong. For example, if you accidentally delete the colon on line 18, an error panel will display below the editor. 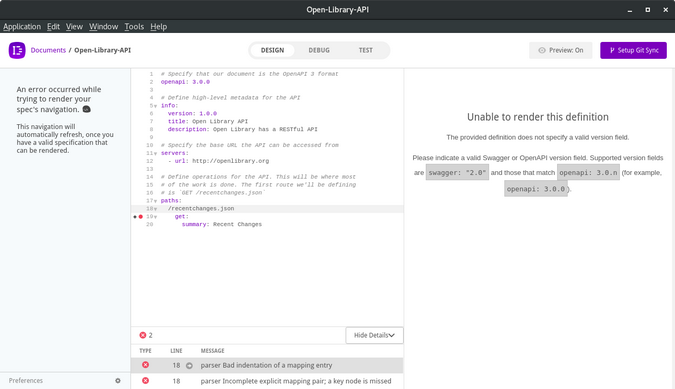 Now that you have defined a specification, you can verify that your definition is correct by switching to Debug mode and sending a real request to the API. In Debug mode, you can see a single route was generated for the GET /recentchanges.json endpoint. Click the Send button beside the URL to execute the request and render the response in the right panel. 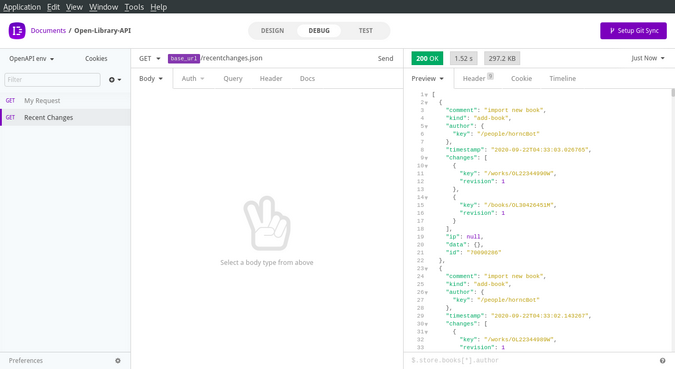 There you have it! You've successfully verified that the API specification you created matches the production API. Now you can move to the next step in the spec-first development workflow and propose a change.

According to the workflow outlined above, changes made to your API should first be defined in the specification. This has a number of benefits:

Go ahead and propose a change to your API. While in Debug mode, I noticed the API returned hundreds of results. To improve performance and usability, it would be useful to limit the number of results returned to a specific amount. A common way of doing this is to accept a limit parameter in the query section of the URL, so go ahead and modify your specification to add a limit parameter.

In OpenAPI, you can define this by adding a parameters block to the route:

You can verify you defined it correctly by expanding the route within the preview and inspecting the parameters. 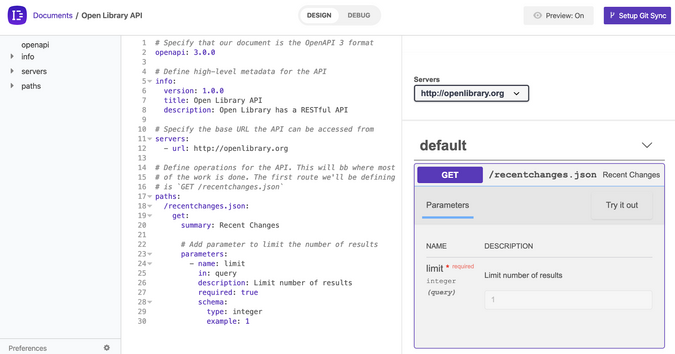 Review and implement the proposal

Now that you have created a proposal spec, you can have your team review and approve the changes. Insomnia Designer provides the ability to sync API specifications to source control, allowing teams to review and approve changes to API specs the same way they do with source code.

For example, you might commit and push your proposed spec to a new branch in GitHub and create a pull request to await approval.

Because this is a tutorial on spec-first development, you won't implement the proposal yourself. The parameter you added is already supported by the API, however, so for the purpose of this article, use your imagination and pretend that your team has implemented the change.

Once the proposal has been implemented and deployed, you can switch to Debug mode, which will regenerate the requests based on your changes, and again verify that the spec matches the production API. To ensure the new query param is being sent, click the Query tab within Debug mode and observe that the limit parameter is set to your example value of 1.

Once you send the request, you can verify that it returns only a single result. Change the limit to a different value or disable the query parameter (using the checkbox) to further verify things work as expected. 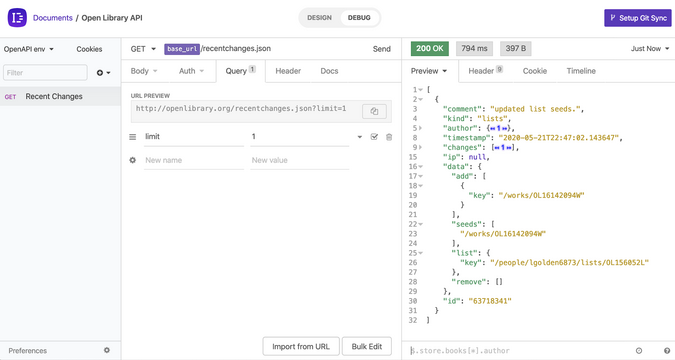 The power of spec-first development

This tutorial walked through a simplified example of spec-first development. In it, you created an OpenAPI specification, verified the specification matched the implementation, and simulated what it's like to propose a behavior change.

For a single API as simple as this demo, it may be difficult to see the full benefit of spec-first development. However, imagine being a product owner in a large organization managing hundreds of production APIs. Having well-documented specifications, accessible from a central location like Insomnia Designer, allows anyone within the organization to quickly get up to speed on any API.

Greg Schier - I'm an independent software developer in Canada, best-known for creating Insomnia. I also have some other projects in the works.
More about me