What they are and how to use them.

Among the many additions in the recent Apache Cassandra 4.0 beta release, virtual tables is one that deserves some attention.

Here is how the JMX-based mechanism in previous Cassandra versions worked. Imagine a user wants to check on the compaction status of a particular node in a cluster. The user first has to establish a JMX connection to run nodetool compactionstats on the node. This requirement immediately presents the user with a few complications. Is the user's client configured for JMX access? Are the Cassandra nodes and firewall configured to allow JMX access? Are the proper measures for security and auditing prepared and in place? These are only some of the concerns users had to contend with when dealing with in previous versions of Cassandra.

With Cassandra 4.0, virtual tables make it possible for users to query the information they need by utilizing their previously configured driver. This change removes all overhead associated with implementing and maintaining JMX access. 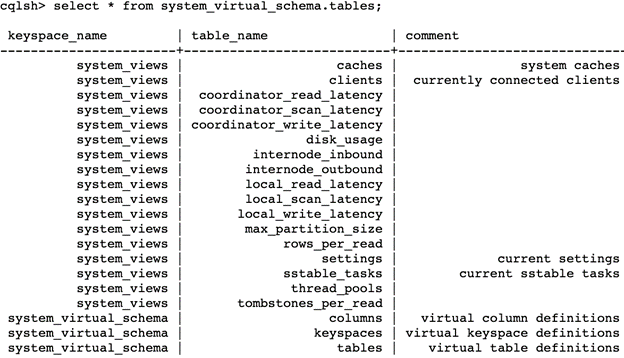 It's important to understand that the scope of each virtual table is restricted to its node. Any query of virtual tables will return data that is valid only for the node that acts as its coordinator, regardless of consistency. To simplify for this requirement, support has been added to several drivers to specify the coordinator node in these queries (the Python, DataStax Java, and other drivers now offer this support).

To illustrate, examine this sstable_tasks virtual table. This virtual table displays all operations on SSTables, including compactions, cleanups, upgrades, and more.

If a user were to run nodetool compactionstats in a previous Cassandra version, this is the same type of information that would be displayed. Here, the query finds that the node currently has one active compaction. It also displays its progress and its keyspace and table. Thanks to the virtual table, a user can gather this information quickly, and just as efficiently gain the insight needed to correctly diagnose the cluster's health.

To be clear, Cassandra 4.0 doesn't eliminate the need for JMX access: JMX is still the only option for querying some metrics. That said, users will welcome the ability to pull key cluster metrics simply by using CQL. Thanks to the convenience afforded by virtual tables, users may be able to reinvest time and resources previously devoted to JMX tools into Cassandra itself. Client-side tooling should also begin to leverage the advantages offered by virtual tables.

If you are interested in the Cassandra 4.0 beta release and its virtual tables feature, try it out.

Apache Cassandra is built for speed and scalability; here's how to get the most out of those benefits.
Anil Inamdar

Ben Bromhead - Ben Bromhead is Chief Technology Officer and Co-Founder at Instaclustr, an open source-as-a-service company. Ben is located in Instaclustr's California office and is active in the Apache Cassandra community. Prior to Instaclustr, Ben had been working as an independent consultant developing NoSQL solutions for enterprises, and he ran a high-tech cryptographic and cyber security formal testing laboratory at BAE Systems and Stratsec.
More about me

A beginner's guide for contributing to Apache Cassandra