Book review: What's Mine Is Yours--The Rise of Collaborative Consumption 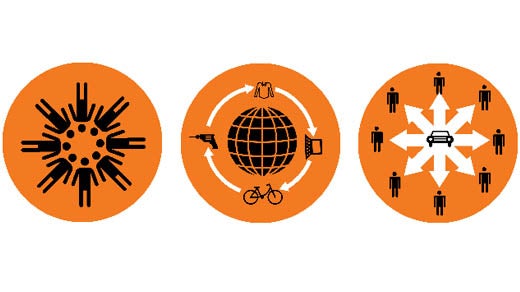 We live in a consumer culture in the most literal sense of that word. We aren't just making purchases. We are consuming. And more than just consuming, we are obliterating our world's resources at an alarming rate. We've become accustomed--and hungry for--changing styles with the change of seasons. But what we must do now is change not clothing, nor electronics, nor cars. We must change our culture. The hardest change of all. And that's what Rachel Bostman and Roo Rogers' What's Mine Is Yours is about.

The book is like a GPS mapping to a culture of the future, with a reassuring glow showing how far you've already driven. They call this culture "collaborative consumption." Put simply, it's a vision of a world in which rather than value owning the latest model of car, we value ZipCar membership. Instead of collecting dust on a Blockbuster-sized collection of DVDs (and VHS--you still have some, don't you?), we join Netflix. And we don't feel deprived. We feel rewarded and proud.

If you're well-versed in current environmental issues, a lot of the early material, like an introduction to the Great Pacific Garbage Patch, won't be as shocking as it would be to someone else. (A someone else who probably very much needs to be reading this book.)

But what might still be new to you is the panoramic view of the myriad ways that we're already embracing the collaborative consumption culture. As a mom who shops consignment sales, hosts naked lady parties (SFW, I promise), and Freecycles everything that doesn't move, I thought I had a pretty good handle on this world I didn't have a name for--the collaborative consumption community. But What's Mine Is Yours introduced me to several I didn't know, including AirBnB and CouchSurfing. (I've already booked my first AirBnB stay!)

Further, the authors envision the possibility that society as a whole--not just the niches that have already embraced collaborative consumption--will take to it not out of guilt, a sense of kindness, or with feelings of sacrifice, but that it will become the new consumer's culture. That the same pride you had showing off your new TV after waiting in line all night after Thanksgiving dinner will transfer away from consumption and ownership to pride in sharing products, services, and systems.

The good news is that it's already started. Zopa helps users go around banks for a peer-to-peer lending system. WeCommune.com puts a modern spin on a word that got a bad rep in the 60s and updates the basic idea that we don't have to live next door to strangers. SolarCity helps answer the problem of "green" being synonymous with "expensive" by designing a product service system around solar panels.

And those are just a handful of examples of collaborative consumption disrupting the economies or business models they're replacing. They're redefining how we look at products and services. They're changing the world.

One last thing--before you think you're clever to point out that by publishing a book, the authors are only contributing to the old consumption culture, the first words when you open the cover are "BARTER, SWAP, OR PASS ON THIS BOOK." That's the title over a log comfortingly reminiscent of your school textbooks where your teacher scrawled your name under a long list of previous temporary owners. But unlike Harry Potter musing on who the half-blood prince could possibly be, you're given the option to see where your book goes by creating a code name for it and tracking its journey on collaborativeconsumption.com.