Tidy Street in Brighton, UK is the center of a domestic energy monitoring project from CHANGE, a collaboration that includes The Open University and looks into using novel technologies to change human behavior, particularly to improve the environment. 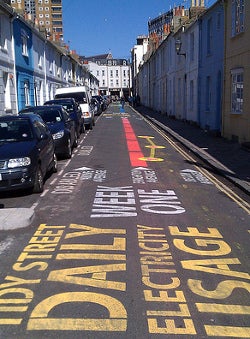 Most people don't know how much energy they're using through the day or how it changes through the year. Research has shown that giving households information about their energy usage leads them to reduce their consumption, generally 5-15%, depending on the type of feedback and how it is given. One 2007 study gave consumers the information as compared to other households in the neighborhood, which resulted in reduction in consumption clearly correlated to those social relationships--but reduction only by the high users. Low users tended to increase their consumption.

Consumption feedback, when given, generally comes along with a monthly bill. But what if the feedback was daily--and right in front of you? The Tidy Street Project wanted to offer it in a way that wasn't too "in your face," but that was also creative and striking. They thought a balance between the two would be the most effective.

Now on Tidy Street, everyone now sees their energy consumption drawn right on the street by local graffiti artist Snub. Each day he adds to the artwork, comparing Tidy Street's usage to the average use in Brighton. Individual results are kept private.

So far, electricity usage has dropped 15% on Tidy Street. They'll continue the project through the rest of April. The art will eventually be removed, but they may pursue other projects to share energy usage throughout the city.