Jim Whitehurst on the next twenty years of Linux 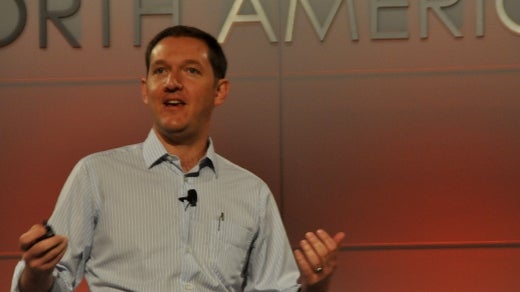 LinuxCon 2011 kicked off this morning with a retrospective from Jim Zemlin, executive director of the Linux Foundation, on the accomplishments of Linux in its first twenty years. Self-professed geek and Red Hat CEO Jim Whitehurst, whose Linux use started with Slackware in the late 90s, followed by Fedora, followed Zemlin with a keynote addressing the next 20 years of Linux.

"The traditional view is that Linux has done a solid job of being a viable alternative to traditional software," he said, adding that since 80% of the Fortune 500 companies are now Red Hat customers, Linux has clearly demonstrated itself as a viable alternative. But that doesn't tell the story of Linux at all. If you look at new workloads and the platform choices that will be made in the next few years, Linux dominates. If you look at web servers or supercomputers, they're Linux. The vast majority of instances spooled up on Amazon EC2 are Linux. If you're starting a business today or a new workload, it's going to be on Linux. Of the top 100 supercomputers today, 92% are on Linux. Linux is the default choice for when you're looking for a platform today. That's an important subtlety--the difference between being a viable alternative and being the default choice.

"If Linux were just the best operating system, it would be interesting--but not fascinating. Linux has made fundamental contributions beyond great software that have made it strategically important to so many types of businesses and IT broadly," Whitehurst said.

There once was a small project called backrub.stanford.edu. It was written in Java and Python and ran on Linux. Today we call backrub.stanford.edu "Google." Linux is great technology, but what really makes it great is the wave of innovation it has enabled that has nothing to do with the technology itself. "Linux, because of its nature--free as in beer--allows new people to try new things and allows new levels of innovation that couldn't have happened before," Whitehurst said. So many businesses happen only because they could be begun cheaply, which opens the door to greater innovation.

"The power we provide our customers isn't that Linux is cheaper than Windows or UNIX, or has more functionality," he continued. "The power we provide is what we enable them to do with the technology." If Facebook had had to buy expensive hardware and software and charge users for the service from day one, would it ever have become what Facebook is now? Probably not. Most of the web as it exists today would not exist as it does if it weren't for the business model that Linux enabled.

Leading innovation is happening in open source, and businesses are being built around it. When users drive innovation, what you get is fundamentally more of what a customer wants.

Whitehurst then spoke of "unintended collaboration," which he sees as highly important to the next 20 years of Linux. For example, the National Security Agency (NSA) in the US is obviously rather worried about computer security. Because of that, they helped Red Hat develop SELinux a decade ago. Today Red Hat Enterprise Linux is certified by the Russian military for its most secure needs. It has applications that run only on Red Hat Enterprise Linux because of its security--because the NSA in the US needed SELinux. That's unintended collaboration and demonstrates one of the biggest benefits of Linux. Through collaboration--intended or not--everyone wins.

Whitehurst said that he asked a very large company why they were willing to share innovations with competitors--essentially, why they were embracing openness. They answered that if they could help anyone else in this world, whether they're a friend or a competitor, burn less electricity, use fewer servers, and make the world a better place, it's their obligation to do that. That it's a moral issue.

Stories like these make the future of Linux unpredictable, because what makes Linux impressive is its principles, not its technology, Whitehurst answered the title of his talk, "The Challenges of the Next 20 Years of Linux" thusly: "I'm going to give you a very unsatisfying answer: I have no idea." But the key is that it's not just about the technology, it's about the result. The innovations. The improvements in the world. Enabling better medicine. New business models.

Jim Zemlin, director of the Linux Foundation, alluded to the same in his own keynote. "Companies come and go. Products come and go. But one thing endures, and that's freedom," he said. "The freedoms that are represented by Linux are incredibly important, for the last 20 years and for the next 100 years."

"Linux is important as a technology, but what it does transcends technology," Whitehurst concluded.

What to read next
Tags
Open Source Summit
Ruth Suehle