Ladies and gentlemen, the wait is over! Brian Beck has been named the 2012 Linux Foundation T-shirt Design winner.

His t-shirt design, entitled “Inspired by Linux,” was inspired by the values his mother instilled in him. Brian believes “a child’s exposure to technology should never be predicated on the ability to afford it.” And “because Mom taught me to share,” he said. 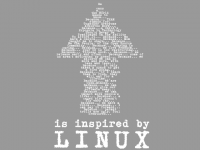 Brian is the Instructional Technology Specialist for the Center for Innovation in Teaching and Research at Angelo State University in Texas. He also co-founded TexOS, the Texas Open Source Project that takes donated computers, installs Linux, and teaches others how to use it.

Sabrina Aqil was named the second place winner for the T-shirt Design contest. Her design is called “Freedom Lifts Us Up,” and she explains that it “highlights the benefits coming off the freedom that Linux brings to us.” This contrasts the obstacles that closed software and patents create, which slows down progress. The design features the Linux mascot Tux giving power to different unexpected technologies that run Linux: shuttles (NASA), submarines (US Navy), cars (Toyota), airplanes and cinema (Disney and Pixar). 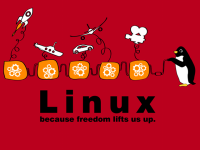 There were almost 100 designs entered in the contest this year. Brian and Sabrina’s designs were selected as finalists then the community chose them as the winners.

Brian was awarded a $2,000 stipend, and Sabrina received a $1,000 stipend, to defray the costs of attending a LinuxCon conference: their choice of either LinuxCon North America (in San Diego) or LinuxCon Europe (in Barcelona). This is the first year the Linux Foundation selected more than one winner, and both have chosen to attend LinuxCon Europe.

Brian and Sabrina’s t-shirts will be available for purchase at LinuxCon in San Diego.

6 ways programmers from underrepresented countries can get ahead

How to manage casual contributors to open source projects

Umm I believe that should be "predicated" not "predicted".
"A child’s exposure to technology should never be predicated on the ability to afford it." - Ken Starks, the Helios Project