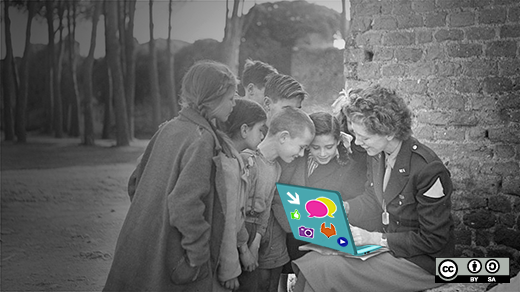 It is worth noting that it is best to contribute to software that you actually use yourself. That way you feel the benefits.

The best way to contribute to open source projects is to use the products themselves. Write that book using Libre Office Writer. Draw a picture in Krita. Create something to 3D print in FreeCAD or Blender. Book your concert tickets on-line through Firefox. Do your personal accounts through Grisbi. Play Flightgear, Battle for Wesnoth, Vega Strike, UFO: Alien Invasion.

Because you are now using the product, occasionally it’ll crash when you try and do something. Or it will do something different than expected.

Get in touch with the developers and tell them. Developers thrive on this feedback from their users. It helps them perfect their product and because they’re open source projects the bug fixes are usually pretty quick.

Each projects will have a link to submit a bug. Go there, register and fill in the details. Remember to tell them what version of the software you were using and the specifications of your computer.

Help write the documentation for the project so it is clearer and easier to understand.

Most of the time the developers are too busy developing and so the documentation needs some TLC. You could format it better, clarify some of the language, add images or tutorials. If bits of the project are unclear, ask on the mailing lists. When you get the response add it to the documentation. Once the software maintainers understand what you are doing, they will be even more helpful with their answers.

There will be a lot of people the world over using this project and some of them might not speak the language the project is released in. If you can speak an obscure language fluently / natively, get in touch with the developers / documentation team and offer your services. You might end up translating the interface, the documentation, even the website.

Offer relevant skills you haveLook at individual projects and see what they need. Can you provide that? Are you a sound designer and could create some noises for an open source computer game? Interface designer? You could help out with redesigning their UI to make it more user friendly. It is even possible to run successful businesses using and training in open source software.

You can also contribute to the libre (freedom) culture by publishing what you create under a creative commons license so your creations can help promote the software they were created on. This could include:

You use CC BY-SA if you want to ensure any reuse is also libre; CC BY generic license if you don’t mind what it’s used for. Find out more at the Creative Commons website.

Raising awareness of Open Source projects is a great thing to do. Don’t get in everybody’s face about it, just let people know what you’ve been using. Created using MyPaint on LinuxMint. Written in Sigil using Ubuntu. Proudly supporting WordPress. That sort of thing.

Last but not least, give them money. With money, the project can hire extra developers that can bug fix quicker, create new tools, make it better for you. Some projects offer one-off donation payments, whilst others allow you to pay small amounts monthly. This is a better idea because it really helps the developers plan when they know how much money is definitely coming in.

Now you know all of this, go forth and help make open source projects amazing.

Here’s just a couple of places to get started. Because I am a designer, I’m afraid that these are for designers too.

Duncan McKean - Fuelled by good music and damn fine coffee.
More about me

Great post Duncan - 100% agree! Our members ask this question very often. Here at http://osclass.org/ non-developers (me included!) help improving our software by testing it, providing us with their feedback, reporting bugs, doing translations, recommending Osclass.org to their friends and donating.

Great post Duncan - 100% agree! Our members ask this question very often. Here at Osclass.org non-developers (me included!) help improving our software by testing it, providing us with their feedback, reporting bugs, doing translations, recommending Osclass.org to their friends and donating. There's a list of tips on how to collaborate to our project! http://blog.osclass.org/2012/11/22/how-to-collaborate-to-osclass/

Good ideas!
A group of FOSS developers, teachers, & students brainstormed a list of nearly 100 ways to get involved in FOSS, many of which do not involve programming:
http://xcitegroup.org/softhum/doku.php?id=f:50ways

Don't forget that artwork and design are good non-programming contributions too - and sorely needed! :)

I will DEFINITELY get more involved! I'm just getting my feet wet with Fedora...and LibreOffice....also the biggest "thrill" for me?: My 13 year old son is foaming at the mouth for me to buy him a laptop that he says (dig this!) he will install Fedora on!! He wants to become a "Linux Dude"!...so I'm all FOR this! Will be seeing what I can do to help as many open source projects along as possible!! Thanks for the cool article!

Great post, thanks for the encouragement :-)
I like this newsletter; I especially enjoyed a recent issue giving insights about teaching your kids how to code. I'll try it with mine, next time they come over ...

I am an avid believer in open source. I even brew open source beer.
I am an IT consultant, with following qualifications:
RHCSA
RHCE
VCP
KasperskyLab CP
Acronis CP
CCNA
CCNA - Security
Watchguard CSP

If I have any choice in the matter, I implement opensource products (infrastructure services of all sorts, mail gateways, proxies, file servers, network monitoring, virtualization, etc.)
But I am simply no programmer. I do fine on the bash, but that it's, unfortunately.

I am saddened to read that there is no real way for me to contribute.

I offered my services to the Fedora Project, but (apart from Nagios), they also had no real use for me as a non-programmer.

If I can contribute in any real way, please feel free to contact me.

I think we could definitely use your skill set in Fedora - can you drop me an email with some more detail on what happened and I'll try to help sort it out and find you a project to work on? It's duffy =at= fedoraproject [dot] org.