In this week's edition of our open source news roundup, we take a look at machine learning, Vanderbilt University's medical technology, journalism mapping tools, and more.

Machine Learning in the spotlight

Machine learning platforms were in the news a lot last week.

First up, Google. The tech giant released the code for its TensorFlow artificial intelligence system with the goal to guide the evolution of artificial intelligence (AI) systems. Google's Jason Freidenfelds says the company "aims to make the software it built to develop and run its own AI systems a part of the standard toolset used by researchers." According to The Conversation, making TensorFlow open source "could be a game changer in the future of AI." David Tuffley writes "By making TensorFlow open source, Google is playing the long-game. It’s positioning itself at the centre of a growing machine learning community."

Next, H2O.ai, the firm behind an open source machine learning platform, announced it has raised $20 million in funding. The money, says H20.ai's Sri Ambati, "will support the explosive growth in our customer community and the application developer ecosystem in key verticals." Ambati adds that H2O.ai will "simplify the use of machine learning to transform rule-based software to real-time learning-based smart applications."

Not to be outdone, Microsoft released an open source machine learning toolkit. Called the Distributed Machine Learning Toolkit (DMLT), this offering "simplifies machine learning work across distributed systems by allowing models to be trained (a core component of machine learning) on multiple nodes at once." This will enable data scientists to get better results quickly and efficiently.

To explain the move to open source, Pietro Valdastri of the Science and Technology of Robotics in Medicine lab says "We’ve done custom capsule design, but we saw we were basically reusing the same components." Valdastri added "Like it is with Lego bricks, you can reassemble them for different functions. We wanted to provide the people working in this field with their own Lego bricks for their own capsules."

One profession that has embraced open source is journalism. News organizations have access to large numbers of open source tools for collection, collating, analyzing, and visualizing data. And now, online news outlet Quartz will be open sourcing a pair of mapping tools.

The tools are a database of global map information called Mapquery, and a visualization tool called Mapbuilder. They create "a system for finding, merging and refining geographic data." Peter Collins, the project lead at Quartz, says Mapquery and Mapbuilder will let journalists, for example, get "information from Mapquery to then go on to produce a map that points out where the major cities, airports, highways and bodies of water are." This adds geographic context to a story, and provides an easy way to produce useful infographics to support a story.

According to Journalism.co.uk, "Quartz aims to have a prototype of Mapquery by April, and will continue to develop Mapbuilder afterwards."

Many organizations adopt open source to lower costs while being able to build and deploy robust systems. Britain's National Health Service (NHS) embraced that motivation when it developed Spine 2, the IT system at the heart of the NHS. According to CIO Magazine, by using "open source tools, developing using Agile and DevOps techniques, and not signing contracts worth over £100 million," the NHS saved £21 million in operational costs.

The new system, built in-house, enables the NHS to "use open source software, develop using an Agile approach, have a fully resilient service, reduce complexity; and be able to swap out the technology if required," says Andrew Meyer, the program head for Spine 2. The NHS cut costs by, for example, moving away from proprietary database systems to NoSQL and Postgres.

Meyer adds that the "majority of our estate is now open source. Open source can support the enterprise and NHS is a huge enterprise." 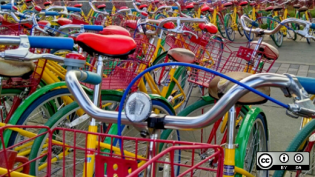