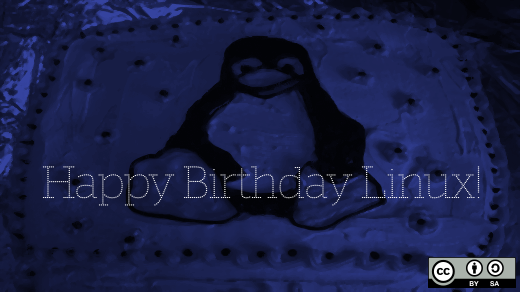 Can you believe Linux is celebrating 24 years already? It was on this day, August 25, back in 1991 when a young Linus Torvalds made his now-legendary announcement on the comp.os.minix newsgroup:

Hello everybody out there using minix -

I'm doing a (free) operating system (just a hobby, won't be big and professional like gnu) for 386(486) AT clones. This has been brewing since april, and is starting to get ready. I'd like any feedback on things people like/dislike in minix, as my OS resembles it somewhat (same physical layout of the file-system (due to practical reasons) among other things).

I've currently ported bash(1.08) and gcc(1.40), and things seem to work. This implies that I'll get something practical within a few months, and I'd like to know what features most people would want. Any suggestions are welcome, but I won't promise I'll implement them :-)

PS. Yes – it's free of any minix code, and it has a multi-threaded fs. It is NOT portable (uses 386 task switching etc), and it probably never will support anything other than AT-harddisks, as that's all I have :-(.

Quite an understated beginning if I ever heard one!

There's some debate in the Linux community as to whether we should be celebrating Linux's birthday today or on October 5 when the first public release was made, but Linus says he is O.K. with you celebrating either one, or both! So as we say happy birthday, let's take a quick look back at the years that have passed and how far we have come.

1991: This year saw the annoucement and release of the very first Linux kernel as well as the release of version 2 of the GPL, though Linux would not adopt the GPL until the following year.
1992: In the now-famous Torvalds-Tannenbaum debate over microkernel versus monolithic architecture, Minix author and renowned computer scientist Andrew Tannenbaum proclaims "Linux is obsolete."
1993: Ian Murdock begins his work on the Debian, and Patrick Volkerding begins the Slackware distribution.
1994: The Linux kernel hits 1.0, and Mark Ewing puts out the "Halloween release" of Red Hat Linux.
1995: The Apache HTTP server, which would drive millions of Linux installations in coming years, begins development.
1996: Linux version 2.0 is released, KDE is founded, and Linux finally gets a mascot in the form of Tux, created by Larry Ewing.
1997: Eric S. Raymond's The Cathedral and the Bazaar is first released at Linux Kongress
1998: Netscape announces its browser will be released under an open source license, LWN opens shop to provide coverage of Linux development, the Open Source Initiative is founded, and the KDE project puts out its 1.0 release.
1999: The Linux kernel hits version 2.2, and the 1.0 release of the GNOME desktop becomes available.

2000: Sun announces that it is making the source code of StarOffice available for download, marking the beginning of OpenOffice.org, and SELinux is first released as open source.
2001: The 2.4 Linux kernel is released, and the first Linux Kernel Developers Summit takes place.
2002: Mozilla 1.0 is released, and Linus Torvalds begins using BitKeeper to manage the Linux source code repository.
2003: Linux kernel 2.6 is released, and stays the current branch for an astounding eight years. Red Hat splits its flagship Linux into Fedora Core and Red Hat Enterprise Linux.
2004: Ubuntu, a Debian derivative, makes its first release.
2005: The Free Software Foundation begins work on version 3 of the GPL, though Linux itself would ultimately stick to version 2. Git is created as an open source alternative to BitKeeper for managing the kernel source.
2006: The first working prototype of the One Laptop Per Child project becomes available.
2007: The Open Source Development Lab (OSDL) and the Free Standards Group merge to form The Linux Foundation.
2008: Android, a mobile operating system based on the Linux kernel, sees its initial release.
2009: The first LinuxCon takes place in Portland, Oregon.

2010: LibreOffice forks from OpenOffice.org.
2011: Linux 3.0 is released, though the changes from the 2.6 line are mostly incremental.
2012: The Wayland project begins, and Red Hat becomes the first billion-dollar Linux company.
2013: The first release of Firefox OS, based on the Linux kernel, is made available.
2014: Linux is now in everything, including cars, heralding the creation of Automotive Grade Linux.
2015: Linux 4.0 is released, and the year of Linux on the desktop finally arrives. (If my search engine says so, it must be true, right?)

Interested in learning more about the history of Linux? Check out this quick video from the Linux Foundation produced for the twentieth anniversary just a few years back.. Or for more on the early days, see this post from Linus himself from 1992 in which he shared more about the early days of the Linux project.

I'd like to give a special thanks to LWN, Bright Hub, and Linux Netbook for their excellent Linux timelines, which helped inspire this brief history.

What to read next
Tags
Linux
Jason B