On April 16, the OpenMW team announced the release of version 0.39.0 of the game. The project, which began back in 2008, is an open source reimplementation of Bethesda Softworks 2002 role playing game Morrowind, and it has now over 120 contributors. Due to the increasing scope of contributors, the development cycle between patch releases is now shorter and more reliable in delivering a quality new content.

The latest version of the game features many important updates, including per-creature respawn time tracking, and many improvements to the AI.

Although still in Early Access, the first playable versions of Vector 36 were released on April 15. Set on a now inhabitable Mars, the game has you build and race hover vehicles. What's interesting about Vector 36 is that while the setting seems to set the player up for a more arcade-like racing game, the developers wanted to focus more on a simulation gameplay style, as noted by Linux Games News.

Vector 36 is a physics based racer set on the terraformed surface of Mars. It is focused more on racing simulation rather than arcade action. You have the ability to completely customize your skimmers to create the quickest tool for the job at hand, whether it's quick sprints or endurance races. The game is single player with a heavy emphasis on leaderboards and global player times.

The game is also now compatible with Oculus Rift.

Hyper Light Drifter is a 2D action RPG that is heavily inspired by late NES and early SNES titles, brought to you by the developers at Heart Machine. Utilising a very stylised and bright colour pallete, the game is not only well designed in terms of easily recognisable areas for a better player experience, but it is just flat-out beautiful.

The game also has a significant lack instruction, which Alex Preston, the lead designer on Hyper Light Drifter, has spoken about.

I think the first core meeting that we had with the five people at the center of this, myself included, we decided that was one of the vital things we wanted to make sure we adhere to from a design point. No text. Don't do it. We don't wanna do it. But it turns out that's a very difficult challenge that we've imposed on ourselves, but ultimately I think it'll be worthwhile because there's something about that lack of text that transports you to a different space. There have been times where we cheat a little bit and just for internal development we put some text on the screen or whatever and it's like, “Oh I don't wanna see that. That doesn't belong here.” It makes the world more coherent. You're exploring a completely different space so when you start to put English or you know, recognizable text on there it kind of detracts from that experience a bit.

What to read next
Tags
Gaming
News
Eden 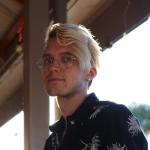 Eden is a software developer, focusing on the web, based in London. They are an advocate of open source software, and likes to contribute actively to the open source community.
More about me