Getting started with my new LulzBot Mini 3D printer 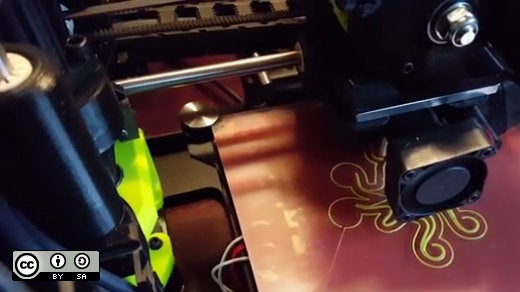 Recently, I won a LulzBot Mini 3D printer in an Opensource.com giveaway. What good fortune! Here's how I got started learning how to use it, and what I made with it.

Spoiler: This printer is a top-quality product, and ready to go out of the box. It is also open hardware and supports a full open source programming chain.

First, I read some reviews and more about the specifications. Then I decided to buff up on learning how to use design software so I could do more than print pre-made designs from sites like Thingiverse.com, though this is a great resource! They have over 600,000 designs ready to download and print.

I started by downloading the open source printer control program Cura, from the LulzBot website. It has been specifically modified to drive their printers to peak performance while remaining fully open source. LulzBot has prepared and tested Cura for Debian, Fedora, and Ubuntu (including my favorite, the Kubuntu desktop). They also provide Windows and MacOS support to those who are still on their way to embracing software freedom. Then, I needed to choose my design software. I selected OpenSCAD from the list LulzBot recommended and began practicing making cubes, cylinders, and other basic 3D shapes, eventually learning how they could be stacked one on top of the other to make interesting objects.

When I found out that my printer would arrive by December 15, and started thinking about what Christmas presents I could make. Needless to say, it was a very busy week of reading, programming, more reading, more programming, and more reading—good thing I'm retired! Searching for 3D information on the Internet yields a vast number of results. I'd recommend that you follow your interests, read a lot, and join a local makerspace, if you can. Check if your local library has demos and classes, too. Libraries are quickly becoming maker hubs.

First, my goal was to focus on making a few projects of my own before digging through the volume of "3D things" online to make. Because of the season, I felt an ornament to hang on the tree would be a good beginner project. I read through the OpenSCAD cheatsheet to learn how to make a sphere and a top cylinder for a hanger. The cheatsheet has links to the online manual for each command option, which is convenient.

When the printer arrived on the morning of Devember 15, I used the LulzBot quick start manual to easily prep the printer and the couple of meters of yellow polylactic acid (PLA), the biodegradable plastic filament recommended for beginners (that's me!), they provided. LulzBot recommends you first make a rocktopus, which is preinstalled in the Cura program found on the USB stick, along with all the incidental tools needed, like a tweezers for clearing stray wisps of extruded filament and a sharp knife used to remove finished objects from the heated platform. 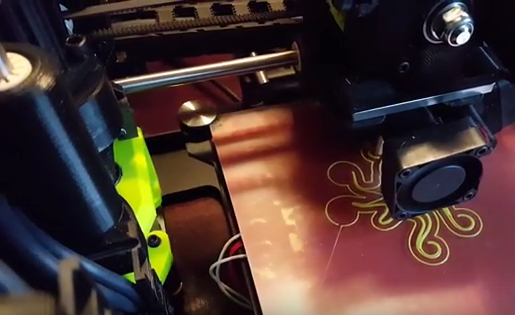 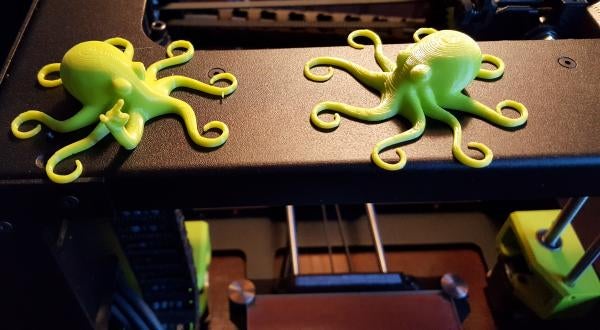 Here's the Christmas ornament I designed next. Text on OpenSCAD by Brody Kendrick is a module for OpenSCAD that allows you to add text to objects, from flat surfaces to spheres. 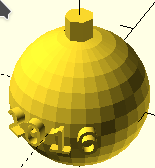 For me, 3D printing is a prototyping system that involves making (many) mistakes and learning from them. I learned that right away with making the ornament.

At first, I didn't provide for enough base support for the sphere, and it tipped over after about 10 layers. I was, of course, right there staring at the printer, so I saw it happen and canceled the print. I read up on the problem and retried with the Cura option to make a wide support base before beginning the actual ornament sphere. It worked great the second try, except that the sphere was very small. We would need a mini tree on which to display it. Also, the ornament took a fairly long time to print, so a quicker project seemed more sensible to me to make something for everyone on my Christmas list.

I decided keychains would be something everyone would find interesting and would be easier to print because it is flat.

Inkscape is a 2D tool that I love to use, and I've used it everyday for years. It isn't natively for 3D, but Dan Newman, a very talented programmer, wrote an extension for Inkscape called Inkscape to OpenSCAD, which I installed for this purpose. It lets me create extrudable shapes in Inkscape before exporting them and opening them in OpenSCAD for final adjustments. Adding Dan Newman's extension provides a way to capitalize on skills already in hand.

I now had an easy-to-make extrusion process for each keychain. And OpenSCAD even had the difference() command, which made the hole for the keyring easy to add, no drilling required.

In the end, each keychain printed in about 15 minutes, which made trial and error practical. I used the blue PLA provided as an extra by LulzBot in my package! 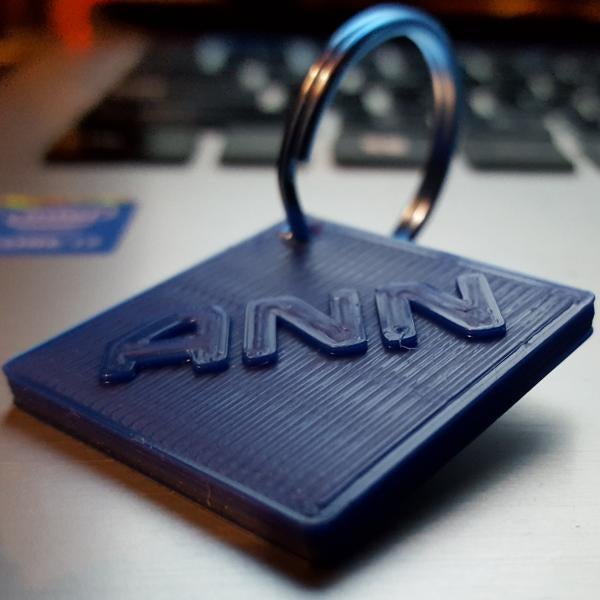 OpenSCAD is not a GUI program. Instead, it works like a programming language with commands to generate the shapes you want. I've worked some with JavaScript and Python, which made OpenSCAD quickly accessible. So, it is going to take a great deal more time and practice for me to advance to making more complex things. However, I did give myself a challenge: a chess set.

My son suggested a chess set would be a cool project, and because I am retired, there was maybe, just barely, time before Christmas, but I warned everyone that I would not be wrapping up a completed chess set as a present.

My first plan for a chess pawn was to build it up in segments. 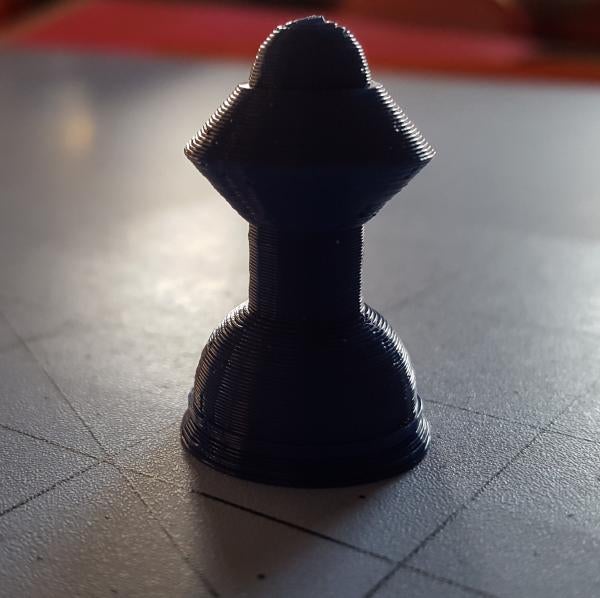 Over the remaining days before Christmas, I modified the basic pawn to ease the union of the two cones so they met in a short vertical cylinder. The original design was a bit sharp to pick up. Next came the rook (or castle). I wanted the rook to look somewhat like the pawn so it would be a "set," so the big change was the top, a battlement. The first version began with a smooth battlement. It was only later, after working on the queen's crown that I changed the rook design to have the gaps of crenellation along the top edge of the battlement.

Though each piece was to be based on a consistent shape, each new piece took me further into making the shapes possible in OpenSCAD. Moving ahead also involved learning about how to do "rotations" and "translations," and accepting that I needed to make compromises because of gaps in my skills. The current version of the chess set isn't pretty; it's linear and only some later pieces begin to use variables instead of hard-coded numbers; still I was happy with the result.

By the end of the week, I'd printed a complete blue set, one or two pieces at a time, and ordered some other colors of PLA. The test was printing a full set of 16 pieces all at once in the yellow PLA. Gladly, changing filament colors is straightforward.

Printing the entire yellow set at once worked perfectly and took under five hours, including the warmup, self-leveling process, and automated cooldown sequence! This combination print demonstrates that the open source Cura control software and the LulzBot Mini printer are not limited to one object at a time or to only short-run projects.

Additionally, from this project, I learned that the part of the printing process using Cura, which is a GUI program, is very simple. Coding a new design is what takes time, unless you've decided to start by downloading designs by other people. Once you get the final code output loaded into Cura, starting the print is really just a simple click of a couple of on-screen buttons. Then, the Lulzbot Mini whirs, hums, and buzzes to begin its paces. 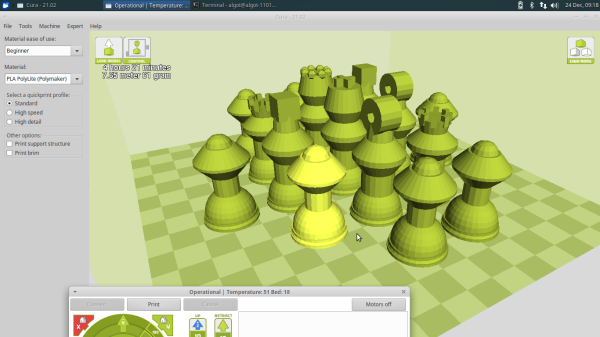 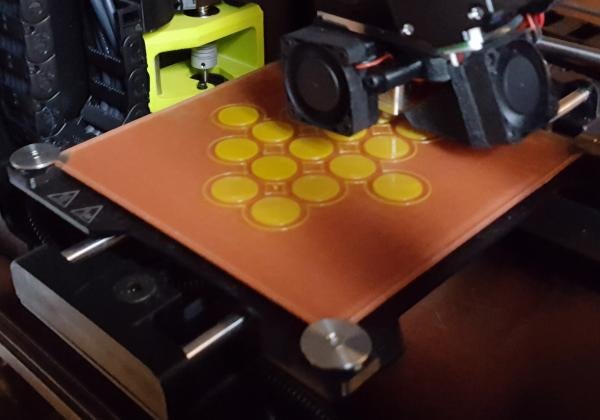 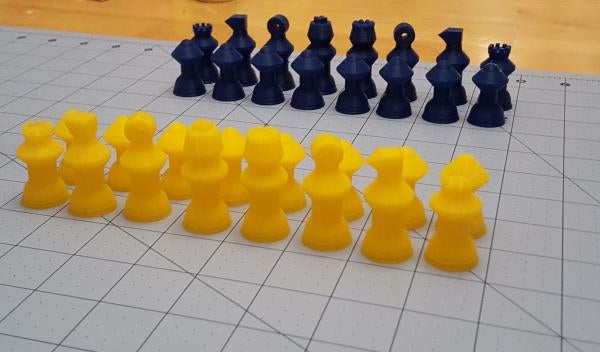 When my son saw the photo, he commented that the color choices were just right, considering our family's Swedish background.

Opensource.com and LulzBot have given me a new hobby, and I'm planning to make the most of it. Going forward, I'll post my designs and notes to a 3D thing repository.

Is Thingiverse the best choice? Do you have suggestions for things to print? Or other things to try with my new printer? 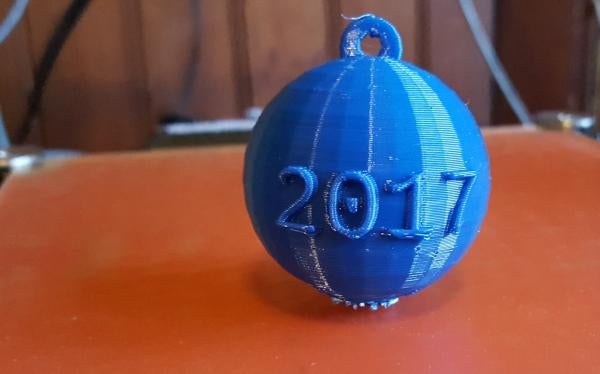 What to read next
Tags
3D printing
Algot Runeman 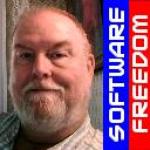 Retired science and computer skills teacher who then "graduated" to school district computer coordinator and then to a retired F/LOSS advocate and KDE supporter.
More about me