Organizing your music: Tagging as you rip

I think that I've always hated filing and organizing stuff. Equally, I always hate it when I can't find something because I haven't filed or organized it well. When it comes to enjoying my music, these two contradicting tendencies tend to show up when I try a new music player that can't figure out how my cover art is stored, can't find the correct cover image online because the album is unusual, or the version I have isn't correctly named. Unusually for me, though, I have invested a fair bit of time (grumpily) in trying to organize my music, meaning I structure it well on disk and make sure the tags and cover images are consistent.

Lately, as I've been exploring new players and new playing environments, I have had the chance to try a few different music tagging applications. I've summarize my experiences so that others might benefit.

What is a music tag?

Before diving too deeply into the why and how of tag editing, consider what a music tag is and why you use it. Any given tag is data about the music contained in the file, which makes it metadata.

Wikipedia's article on tag editors mentions a substantial number of music formats and on the format of tags themselves carried within those formats. The site's open FLAC music format article tells us that FLAC "uses the same system as Vorbis comments" for storing metadata. Wikipedia's Vorbis comments article further informs us that tags are intended to store short Unicode strings as well as (binary) cover art. The general format is FieldName=Data. As for the MP3 format, its tags are stored in ID3 format. MP3 is not really open, although it is commonly treated as such and has had some its patents apparently expire (see the section Licensing, Ownership and Legislation). And by the way if the description of patent shenanigans in that article aren't enough to convince everyone to start using FLAC or Ogg Vorbis, I'm not sure what is.

Besides all that technical stuff, music tags or metadata are put there for our convenience, so each file carries around enough info to identify itself. Many music players maintain copies of this metadata in a "music database." Of course, in doing so, the music database and the metadata can get out of sync, which can lead to all sorts of irritating disorganization. Note that there is a further opportunity to disorganize, since a music file will have a name (within the computer's file system), which could reflect, among other things, the name of the song, the track number from the album, the artist's name, and other information. This data may be found as well in the tags and the music database. And, of course, all three can be out of sync.

The three stages of music tagging

There are three stages of managing one's music collection where tag management (and here I'm including sorting out cover art) can happen:

Based on these stages, aside from general-purpose tag editing tools, we can consider:

Considering that metadata occurs in three obvious places (within the music file itself, as a part of the file and directory names in the file system, and in the music player's music database), what first seems simple—editing music tags—can get suddenly quite complex and involved.

In this month's article, I'm going to take a look at readily available open source music ripping software, as seen from the perspective of its ability to manage tags. I spotted several music ripping tools in my distro's repositories: asunder, goobox, ripoff, ripperX, sound-juicer, crip, and ripit.

Considering all of that, I have had a soft spot for asunder for quite some time now. Asunder provides a decent GUI-based experience, uses cdparanoia for ripping, converts to FLAC (and many other formats), organizes the ripped files in a configurable directory structure, and—to some extent, anyway—manages tags by looking up the CD in question on the CDDB music meta database. 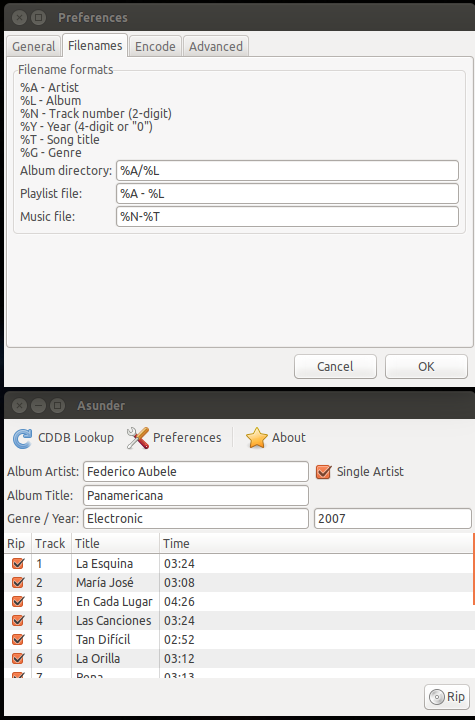 Asunder with its preferences window open to the file naming tab, showing its flexibility in organizing ripped music.

Two things I have not been able to do with asunder, which I would love to have: the ability to attach cover art during the ripping process and the ability to deal with a few more tags, like "composer," for example. Asunder is pretty good at dealing with "artist" versus "album artist," which I seem to recall was a major pain in the neck at some point in the past.

As a music rippers go, asunder is pretty great, but it forces me to do the final tag and album cover adjustments either in a tag, editor or in a music player—not quite what I want.

I decided to give goobox a try. Once started, the application looks clean and GNOME-like. Nice. One thing immediately jumped out, as compared to asunder: goobox knows about cover art. The simplicity quickly had me wondering, could I instruct goobox where to put tracks? (In my case, because of asunder's limitations mentioned above, I stage them in ~/Music.rips.) But I could not set the directory structure, nor the file name layout, although the directory structure and naming convention used by goobox were okay with me. Moreover, I didn't seem to be able to save the cover art as a "cover.jpg" file in the generated directory. Finally, I could not tell whether goobox was using cdparanoia or not, and if it was, with what parameters.

Therefore, I would say that if goobox meets your needs, by all means use it, but don't expect to bend it to your will.

I took a quick look at ripoff. The documentation suggests that it can be made to use cdparanoia; however, it did not seem to detect any encoding plugins, so I did not investigate further.

I also gave ripperX a try. This application is the complete opposite of goobox, at least cosmetically. The icons are large and not very smooth looking. It offers a fair bit of configurability, including the layout of results and the use of cdparanoia, but I saw nothing obvious about cover art. I don't see it as being much better or worse than asunder.

If I am not wrong, I used sound-juicer in the past (in GNOME-2 days, perhaps). I seem to recall that sound-juicer uses cdparanoia, but its settings are not accessible from the sound-juicer GUI. Moreover, I don't see anything about cover art in its settings.

Crip and ripit are terminal applications (meaning their UI is not graphical). While I am not averse to such things, they seem unlikely to support the cover art thing, so for now I'm not bothering with them.

In summary, none of the currently available CD ripping software meets all my requirements. I'll stick with asunder for now and hope that something comes along to address ripping, full tag editing, and cover art downloading and management.

In my next article, I will talk about some music players and their ripping and tagging abilities.

It's already February 2017 and I haven't bought any new music yet this year. However, over the December holidays, I did rip some classical CDs that were languishing away in the cabinet, and I thought I'd pass on some thoughts on that.

For quite a few years now, I have been a fan of Jordi Savall and the ensemble he formed in the 1970s called Hesperion XX (now Hesperion XXI). This video gives a fine idea of this kind of music, and this interview, with the Spanish newspaper El País, tells us more about the man and his interests (you might need to ask your favorite search engine to translate the article for you).

At the end of 2016, I ripped two works directed by Savall. The first is El Cant de la Sibil·la performed by the Capella Reial de Catalunya, and the second is the Cancionero de Medinaceli performed by Hesperion XX. These are wonderful performances of unusual music of 500 or so years ago.

Also in the "unusual music camp," is the album Officium, performed by the Hilliard Ensemble and Jan Garbarek. The choral music and the atmospheric saxophone form an interesting juxtaposition. This album can be heard online on various streaming services and has two follow-ups, Mnemosyne and Officium Novum.

Last is a "best of" album given to me as a present some years ago: The Best of Andrés Segovia. If you like classical guitar music, this recording is a diverse compilation of various music styles transcribed for the guitar, including some well-known pieces. I particularly enjoy the performance of Albéniz Asturias on this album. It doesn't have the manic speed of some interpretations and is, to my way of thinking, more expressive because of that. I also really like the voice of his instrument!

What to read next
Tags
Open Music column
Chris Hermansen