14 ways being a runner is like working in tech

How is running like working in IT? We round up more than a dozen reasons. 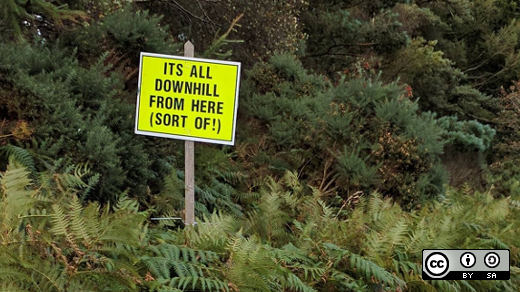 I started running more than a decade after I started working in tech, but I quickly saw similarities between the two activities that take up most my time. I know—and have run with—many people in tech who also happen to be runners, but I suspect my observations work well for other fields, too. I've rounded up a list of ways being a runner is like working in tech.

1. Getting started is hard.

As a colleague recently pointed out, "Some people start it and quit every 6-9 months." Was he referring to running? Or learning to program? (He was talking about his efforts to take up running, but easily could have been describing my efforts to learn Python.)

Even new runners or new programmers quickly immerse themselves in their new-found passions. When you're at the office and are telling a colleague all about your pronation problems and the toenail you lost over the weekend, you notice her eyes glazing over as she scrambles for her noise-canceling headphones. You're reminded of the conversation you had on the trail last weekend—you were talking about the open source project you're contributing to, only to realize that your running partner was fascinated about your project related to open sores.

Your ideal running partners also work in tech, because they really get you. They understand why you're up early for a run before work, and then spend evenings or weekends picking up new technical skills, playing with a Raspberry Pi, or out running trails starting at 7a.m. on a frigid Saturday morning.

3. You meet the most fascinating people.

I've had the privilege of getting to know well-respected software developers, journalists, marketers, CIOs, conference organizers, community managers, and industry leaders I've met on group runs and trail races. And my career in tech has provided me with opportunities to meet educators, poets, musicians, doctors, pilots, and artists. The running and tech worlds are full of smart, interesting characters with great stories to share.

4. Wherever you go, you find kindred spirits.

Whether you travel regionally or internationally, running and working in tech both provide opportunities to connect with people who have similar interests. I've made friends at conferences by showing up for dinners arranged by strangers over Twitter with an event hashtag, and I've made friends in new communities by showing up for running meetups arranged over Facebook.

5. You'll have many great networking opportunities.

I moved to Raleigh a couple of years ago, and recently I decided to make an effort to meet people outside of work, so I joined a local running group. I met two women in the group for a Saturday morning run. As it turns out, one of them works at my company, a few floors above me, but the experience still gave me the opportunity to meet two people I otherwise might not have met. In the past, I've also gotten writing work from a running partner, and colleagues have introduced me to great nearby running trails. 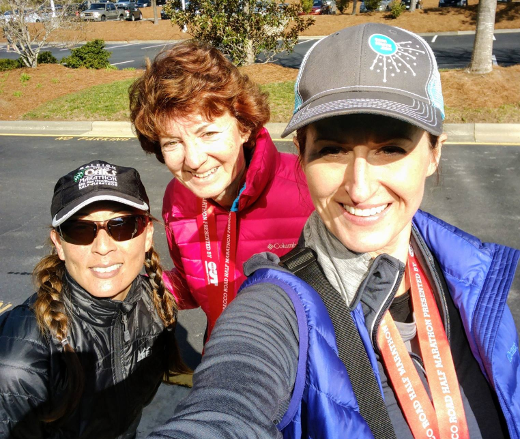 I met Genno (left) and Andrea (center) through running groups in Kansas and North Carolina, respectively. You can get to know someone pretty well during 13 miles of chatting.

6. People want you to succeed.

The vast majority of people in tech are eager to welcome and help new people into the mix, and many communities even have special programs to ease the transition. On GitHub, for example, you'll find a list of projects that are known for being welcoming to new contributors. I've spoken with runners who are slow or who can't go very far about how hard running can be, and how bad they feel in comparison to "real" runners. In fact, I've been that slow person who can't run far. But anyone who runs is a "real" runner, and other runners are genuinely happy to welcome new folks to an activity we have in common. Running and tech circles tend to be mixed with people from the novice level and weekend hobbyist, on up to seasoned experts and ultra-marathoners.

7. There are programs for people of all experience levels.

Running has programs like the popular Couch to 5K running plan, whereas tech has a plethora of beginner-level programs for new coders, such as the Learn Code the Hard Way series.

Programmers count lines of code and constantly work on developing programs that do more, faster and more efficiently. Runners count minutes and kilometers and heart rates as they also work toward improving speed and form to set new personal records. (Don't ask me what VO2 max, but other runners can tell you all about it.)

9. You might start as an individual, but you'll stay because of the community.

I started running on my own one day in 2010, but I didn't really enjoy running until I started running with a friend, and later with running groups. Similarly, I didn't know anyone at my first job in tech publishing, but the main reason I've stayed in tech for two decades is the community. 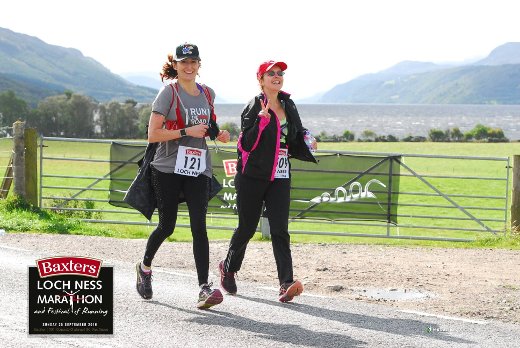 Running the Loch Ness Marathon with Dawn Foster (September 2016), whom I met years ago at a LinuxCon event.

The first woman to run the Boston Marathon, Roberta "Bobbi" Gibb, did so even though her application had been denied and she was told that women weren't "physiologically able" to run it. She was 23 and finished in 3 hours, 22 minutes, and 40 seconds, although she wasn't an "official" Boston Marathon runner. "It didn't fit into people's stereotypes," she says. The following year, Kathrine Switzer became the first woman to run the marathon with an official number, although her participation was recorded as unofficial. Women weren't officially allowed to run the Boston Marathon until 1972.

Although women aren't officially barred from entering tech careers, we still run into unexpected road blocks and glass ceilings. I'm anxious for the day when the barriers to entry for everyone are removed, and we've changed the stereotypes of what a person in tech looks like.

Running and technology don't have age restrictions. I didn't get my first computer until after college, and I didn't start running until I was 40. If you've been around little kids and gadgets, you'll notice how they pick up technology quickly. And meeting older people in tech who are entering the field as part of a career change, or because retirement has given them free time to pursue new passions isn't uncommon. With running, many schools, running groups, and families encourage kids and organize events to get them moving. Meanwhile, running trails and races are filled with people of all ages, including late-starters like me, on up to seniors, and folks of all shapes and sizes.

An article in The New York Times, "Why Older Runners Are Ultrarunners," offers an explanation about older runners that also could describe older, more seasoned people working in tech:

Ultrarunners, especially older ones, tend to run long, but not very fast. They know how to pace themselves. They are experienced and can marshal their resources appropriately for the big day as opposed to grinding out the miles in training day after day.

13. Taking a break can help you work out problems or avoid burnout.

Often software developers and writers, for example, can work out problems by stepping away from the keyboard and taking a break. Some of us even find that running helps us get the answers when we're stuck. And many of us who have struggled with burnout over the years find that getting away from our work or switching to new projects can be re-energizing. I've found running helpful for working through personal and work-related issues, and I've even written entire articles in my head as my feet hit the trails.

The same goes with runners—sometimes stepping away from running, either because of an injury or burnout, is a wise choice. Or changing up running routes, routines, and companions can be rejuvenating.

14. We couldn't enjoy what we do without help from volunteers.

The trails don't groom themselves, races aren't self-organizing, and food and water doesn't magically appear during long runs without the help of armies of volunteers. The friendly faces along the way holding up motivational posters and high-fives help weary runners drag to the finish lines.

In tech, the same is true. Volunteers help organize communities and run events, troubleshoot and answer questions for new community members, create road maps in the form of documentation, and provide pep talks and offer sage advice when we hit road blocks.

For all the volunteers who make tech and running communities welcoming, safe, and fun: I salute you.

Now it's your turn. What did I leave off the list? Share your additions in the comments.

What to read next
Rikki Endsley