What you need to know about hybrid cloud

Learn the ins and outs of hybrid cloud, including what it is and how to use it. Of the many technologies that have emerged over the past decade, cloud computing is notable for its rapid advance from a niche technology to global domination. On its own, cloud computing has created a lot of confusion, arguments, and debates, and "hybrid" cloud, which blends several types of cloud computing, has created even more uncertainty. Read on for answers to some of the most common questions about hybrid cloud.

What is a hybrid cloud?

Basically, a hybrid cloud is a flexible and integrated combination of on-premises infrastructure, private cloud, and public (i.e., third-party) cloud platforms. Even though public and private cloud services are bound together in a hybrid cloud, in practice they remain unique and separate entities with services that can be orchestrated together. The choice to use both public and private cloud infrastructure is based on several factors, including cost, load flexibility, and data security.

Free whitepaper: Learn why private cloud is still a high priority in the push toward digital transformation

Advanced features, such as scale-up and scale-out, can quickly expand a cloud application's infrastructure on demand, making hybrid cloud a popular choice for services with seasonal or other variable resource demands. (Scaling up means to increase compute resources, such as CPU cores and memory, on a specific Linux instance, whereas scaling out means to provision multiple instances with similar configurations and distribute them into a cluster.)

At the center of hybrid cloud solutions sits open source software, such as OpenStack, that deploys and manages large networks of virtual machines. Since its initial release in October 2010, OpenStack has been thriving globally. Some of its integrated projects and tools handle core cloud computing services, such as compute, networking, storage, and identity, while dozens of other projects can be bundled together with OpenStack to create unique and deployable hybrid cloud solutions.

Components of the hybrid cloud

As illustrated in the graphic below, a hybrid cloud consists of private cloud, public cloud, and the internal network connected and managed through orchestration, system management, and automation tools. 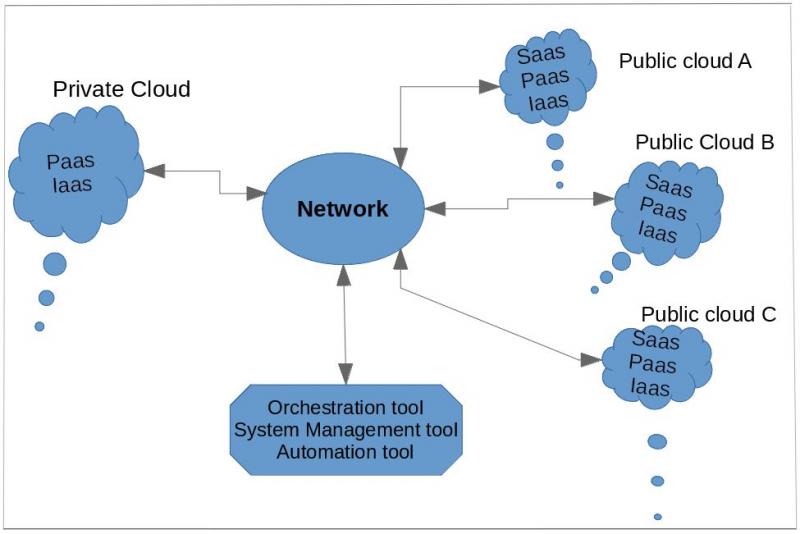 A cloud orchestration tool is necessary for planning and coordinating private and public cloud instances. This tool should inherit intelligence, including the capability to streamline processes and automate repetitive tasks. Further, an integrated automation tool is responsible for automatically scaling up and scaling out when a set threshold is crossed, as well as performing self-healing if any fractional damage or downtime occurs.

In a hybrid cloud, system and configuration tools, such as Foreman, manage the complete lifecycles of the virtual machines provisioned in private and public cloud data centers. These tools give system administrators the power to easily control users, roles, deployments, upgrades, and instances and to apply patches, bugfixes, and enhancements in a timely manner. Including Puppet in the Foreman tool enables administrators to manage configurations and define a complete end state for all provisioned and registered hosts.

The hybrid cloud makes sense for most organizations because of these key features:

Where hybrid cloud is today

Although there is a large and growing demand for public cloud offerings and migrating systems from on-premises to the public cloud, most large organizations remain concerned. Most still keep critical applications and data in corporate data centers and legacy systems. They fear losing control, security threats, data privacy, and data authenticity in public infrastructure. Because hybrid cloud minimizes these problems and maximizes benefits, it's the best solution for most large organizations.

Where we'll be five years from now

I expect that the hybrid cloud model will be highly accepted globally, and corporate "no-cloud" policies will be rare, within only a handful of years. Here is what else I think we will see:

What predictions do you have for hybrid cloud—and cloud computing in general—over the next five years? Please share your opinions in the comments.

What to read next
Tags
Cloud
Amit Das

Amit works in Red Hat, and is passionate about linux, cloud computing, devops etc. He is a strong believer that new innovation and technology, in a open way, can positively impact the society and change many lives.
More about me