Sudokus are simple logic games that can be enjoyed just about anywhere, including in your Linux terminal. 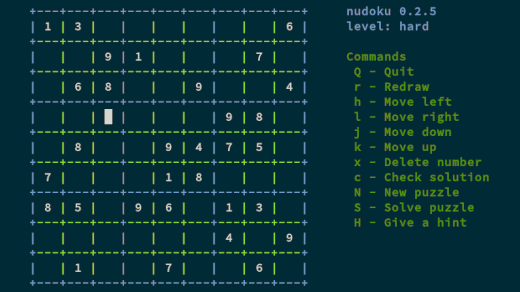 Welcome back to another installment in our 24-day-long Linux command-line toys advent calendar. If this is your first visit to the series, you might be asking yourself what a command-line toy even is. We’re figuring that out as we go, but generally, it could be a game, or any simple diversion that helps you have fun at the terminal.

Every year for Christmas, my mother-in-law gives my wife a Sudoku calendar. It sits on our coffee table for the year to follow. Each day is a separate sheet (except for Saturday and Sunday, that are combined onto one page), with the idea being that you have a new puzzle every day while also having a functioning calendar.

The problem, in practice, is that it's a great pad of puzzles but not a great calendar because it turns out some days are harder than others and we just don't get through them at the necessary rate of one a day. Then, we may have a week's worth that gets batched on a lazy Sunday.

Since I've already given you a calendar as a part of this series, I figure it's only fair to give you a Sudoku puzzle as well, except our command-line versions are decoupled so there's no pressure to complete exactly one a day.

I found nudoku in my default repositories on Fedora, so installing it was as simple as:

Once installed, just invoke nudoku by name to launch it, and it should be fairly self-explanatory from there. If you've never played Sudoku before, it's fairly simple: You need to make sure that each row, each column, and each of the nine 3x3 squares that make up the large square each have one of every digit, 1-9.

You can find nudoku's c source code on GitHub under a GPLv3 license.

Be sure to check out yesterday's toy, Use your Linux terminal to celebrate a banner year, and come back tomorrow for another!

Use your Linux terminal to celebrate a banner year

Need make sure your command is heard? Pipe it to a banner and it won't be missed.