Drive a locomotive through your Linux terminal 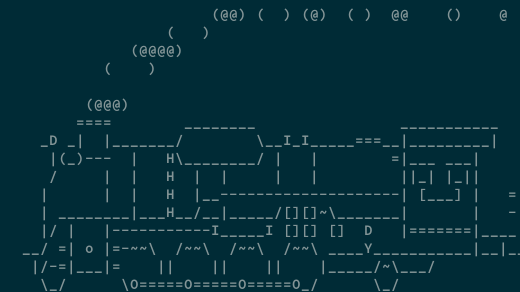 It's December, and every Linux terminal user deserves a reward just for making through the year. So we're bringing you a sort of advent calendar of Linux command-line toys. What's a command-line toy? It might be a game, a pointless little time waster, or just something to bring you joy at the terminal.

It's also, conveniently and not coincidentally, a common typo for the Linux ls command. Want to stop mistyping ls? Try installing sl. It's probably packaged for your default repos. For me, in Fedora, that means it was as simple to install as:

Now, just type sl to try it out.

You may notice, as I did, that Ctrl+C doesn't derail your train, so you have to wait for the entire train to pass. That'll teach you to mistype ls!

Want to check out the source to sl? It's over on GitHub.

sl is also a great opportunity to share a personal PSA about open source licensing. While its license was "open source enough" to be packaged for my distribution, it's not technically an OSI-approved license. After the copyright line, the license reads simply:

Unfortunately, when you chose a license that's not OSI-approved, you may accidentally be creating extra work for your users, as they must figure out whether your license will work for their situation. Do their corporate policies allow them to contribute? Can they even legally use the program? Does the license mesh with the license of another program they wish to integrate with it?

Unless you're a lawyer (and perhaps, even if you are), navigating the space of non-standard licenses can be tricky. So if you're still looking for a New Year's Resolution, why not resolve to choose only OSI-approved licenses for any new projects you start in 2019.

No disrespect to the creator, though. sl is still a great little command-line toy.

Check out yesterday's toy, Box yourself in on the Linux command line, and check back tomorrow for another!

Box yourself in on the Linux command line

Learn how to use the boxes utility to draw shapes with characters at the Linux terminal and make your words stand out.