Play Tetris at your Linux terminal

Play Tetris at your Linux terminal

Recreate the magic of the 1980s with everyone's favorite tile-matching game, Tetris. 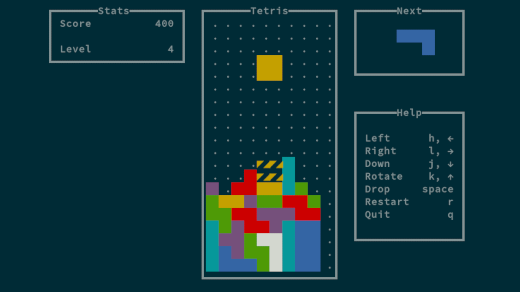 Thanks for joining us for today's installment of the Linux command-line toys advent calendar. If this is your first visit to the series, you might be asking yourself, what’s a command-line toy. Even I'm not quite sure, but generally, it could be a game or any simple diversion that helps you have fun at the terminal.

It's quite possible that some of you will have seen various selections from our calendar before, but we hope there’s at least one new thing for everyone.

I promised when I started this series I'd be including games, but so far I've neglected to, so let's fix that with today's selection: Tetris.

Tetris and I are almost exactly the same age, having first come into the world in the summer of 1984. Instead of rural North Carolina, though, Tetris originated in Moscow in what was at the time the Soviet Union.

After taking the world by storm, Tetris was cloned many, many times. I would suspect you could find a Tetris clone for just about any operating system in any language you looked for. Seriously, go look. There are some fun ones out there.

The version I'm bringing you for today's command-line toy is written in Haskell, and it's one of the better-done versions I've seen, with on-screen preview, score, help, and a clean look.

If you're willing to run a compiled binary from an untrusted source (I wouldn't recommend it), you can grab that directly, but for a safer approach, it's also easy to use a containerized version with dex, or to install from source with stack.

This particular Tetris clone is by Sam Tay and available under a BSD license. Check it out!

If you've got your own favorite Tetris clone (or maybe you've written your own?), let us know!

Check out yesterday's toy, Plan your own holiday calendar at the Linux command line, and check back tomorrow for another!

Plan your own holiday calendar at the Linux command line

Link commands together to build a colorful calendar, and then whisk it away in a snowstorm.
Jason Baker (Red Hat)

"Tetris and I are almost exactly the same age, having first come into the world in the summer of 1984"

Well, that pretty much ruined my morning ;) (Graduated high school in 85)

I've made a clone of Tetris called Blockis that runs in the Linux terminal, and also on a LED-panel:
https://github.com/mobluse/blockis

Oh cool. Maybe next year I'll have to do a Raspberry Pi toys advent calendar. :)