Why NASA open sourced the Rover

Need a new project? You can build your own. 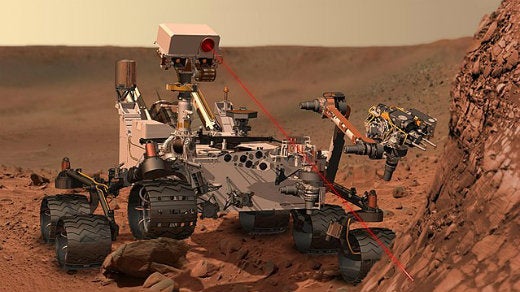 The host of the Command Line Heroes podcast, Saron Yitbarek, kicks off each episode with a sound-studded description of an event that sets the stage for the topic of the episode. Sometimes it's a speech from Al Gore, and sometimes its the Mars Curiosity Rover landing.

You should go have a listen.

In the final episode recap, Yitbarek walks us through "how open source fuels some of humankind's grandest projects."

She starts with the Mars Curiosity Rover robot explorer, which has it's own Twitter account with 4 million followers. The account recently tweeted an invitation to all to go build your own Rover, complete with open source instructions and code. The SGV Hack Group was the first to take up the challenge.

Wait, wait. Back up. The Rover is open source. All of the software and hardware?

Tom Soderstrom, IT Chief Technology Officer at Jet Propulsion Laboratory, explains: "Why open source? For us, it was more difficult to make it open source. We did that so other schools could adopt it and build it. The bottom line is, when we release something as open source it's cleaner, it's tighter, it's better documented. It has to be built to be extended."

Those are bold words from someone who should know.

"We look for, is there life out there? How did the universe originate? Where is it going? We're trying to find Earth 2.0 —earth-like planets that one day we could inhabit," says Tom Soderstrom. "It's not meant to be a toy, it's meant to be something real."

Tom goes on to explain that everything about the Rover is open source so that others will experiment with it and try new things. He's excited to see what people come up with. "If I can think of something, someone's already doing it."

To wrap up the episode, Yitbarek digs a little deeper into NASA's relationship with open source.

Listen to episode 8 of Command Line Heroes, and add the podcast to your list so that you're ready when Season 3 drops later next year.