The knitting printer and more art with open source

The knitting printer and more art with open source

For several years, linux.conf.au, a week-long conference (held this year from January 22-26), has held "miniconfs" offering space for tech community niche groups to share their inventions and ideas. In 2018, 12 miniconfs were held on the first two days of the conference, and the Art + Tech miniconf took the concept to the next level with an entire day of 11 talks about making art with tech, as well as an art exhibition head during the conference. This miniconf was organized by blue ribbon award-winning knitter Kris Howard.

Disclaimer: Some of the links in this article contain mature content. As Kathy Reid, Linux Australia president, said: "Significant art is often contentious, because it challenges who we are and the notions we hold of ourselves. Our job here is to allow that art to be shown, while creating a safe environment for those who do—and do not—wish to view it."

The Art + Tech miniconf was held on Tuesday, the second day of the conference, but a lot of the speakers' work was exhibited during the Monday lunch break. This allowed attendees from around the conference to see the artwork on display and drove interest in the talks on Tuesday. 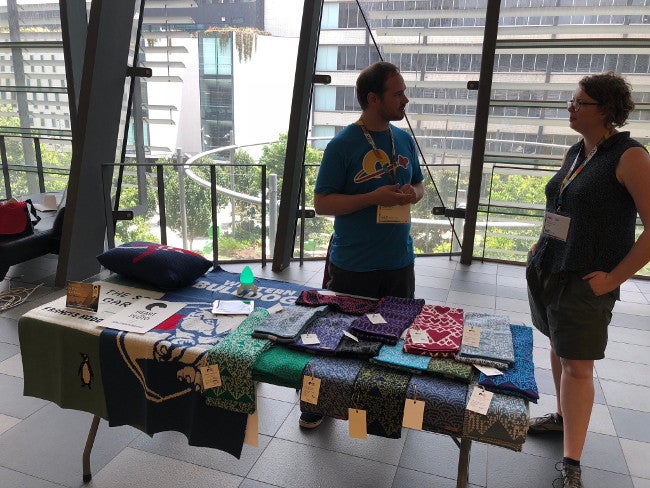 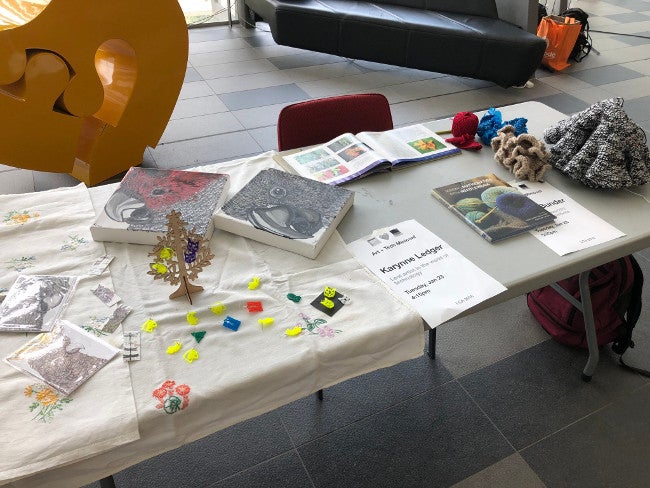 The future of art

The opening talk, "The future of art," was presented by J. Rosenbaum, one of the miniconf artists, who began by saying, "Robots are not our evil overlords, they are our new best friends." J. shared a showcase of artistic works, ranging from the cute and interesting to borderline disturbing. Some of the more consumable examples were the works from Botnik, the minds behind the recently viral "Harry Potter and the Portrait of What Looked Like a Large Pile of Ash." J's entire talk is absorbing and worthy of reflection.

If I were a pixel, what would I do?

In an overview of the complex world of shaders, Harley Mellifont showed off the power of the OpenGL Shading Language (GLSL) in his miniconf talk, "If I were a pixel, what would I do?" He also mentioned a tutorial on shaders that will "blow your mind."

In a talk near and dear to my heart, Mark Rickerby spoke on writing machines and their history, from the 1840s to today's twitter bot Markov chains. He also summarized interesting issues related to getting machines to compose English in a natural way (which was also the topic of a lightning talk at Linux.conf.au 2017 by Roan Kattouw).

Building detailed fractal sets for Guardians of the Galaxy Vol. 2

In a talk where you just had to be there (because it was not recorded due to the copious amounts of Marvel content), visual effects artist Miles Green shared behind-the-scenes work to create the fractal set design from Ego's Garden and Ego's Palace in Guardians of the Galaxy Vol 2. It was a very interesting look at how AnimalLogic created just a small bit of the background scenery for a beautifully rich movie.

In a talk that I had an increasingly hard time not audibly squee'ing throughout, Sarah Spencer shared how she made a network-connected knitting printer, highlighting the All Yarns Are Beautiful and Electo-knit projects. She has released a number of projects relating to her workflow on her GitHub page, including octoknit, an interface to upload patterns to a Brother 950i knitting machine, and binary-to-image, which takes text and outputs it as an image, allowing you to do things such as knit your favorite lyrics into a scarf!

In his talk, Christopher Biggs showed how he practices iterative design by literally sketching in hardware. He described some of his side projects and the iterative development process afforded by cheap 3D printing mock designs, a technique he picked up from Naomi Wu.

Lost artist in the world of technology

Following a lineup of developers, Karynne Ledger, a chef and artist, showed us how she uses technology to augment her artwork. She lamented that it is not easy for her to pick up certain tech products that her more technically inclined friends say are "easy." This resonated with me, as technologists should ensure that the things we create are easily accessible and usable by people with varying levels of technical aptitude, not only by people like us.

He also demonstrated iCircuit, an app that allows you to test circuit diagrams without the chance of LEDs "shining very brightly very briefly."

In her possibly oversold talk title "The best talk ever1!!!!! Hyperbolic hyperbole," Rachel Bunder described her crochet coral reef project and the mathematical complexities of the multi-dimensional art that is wool work. 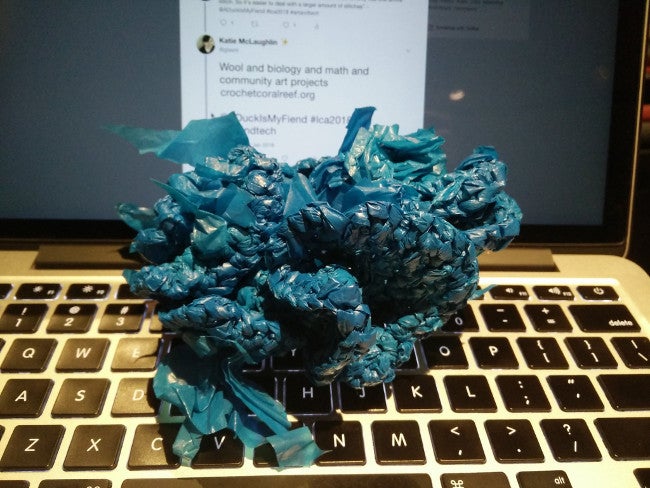 In a talk prefaced with "this is why you don't need to buy a 3D printer," Dr. Josh Deprez described how he created his mini Mac, a computer based on Raspberry Pi with a case made of balsa wood. He also spoke on the iterability of balsa, a very lightweight wood readily available in craft stores.

I rounded out the day with my talk on my cross-stitch generation software. In 2014, during my first-ever lightning talk, I accidentally promised that I would make open source cross-stitching software. Four years later, I've released 626, a Python-based HTML generator that does just that. I also released a QR code chart generator, which takes a string and generates a QR code cross-stitch chart, an idea that people were excited to see after I tweeted about it in early January. 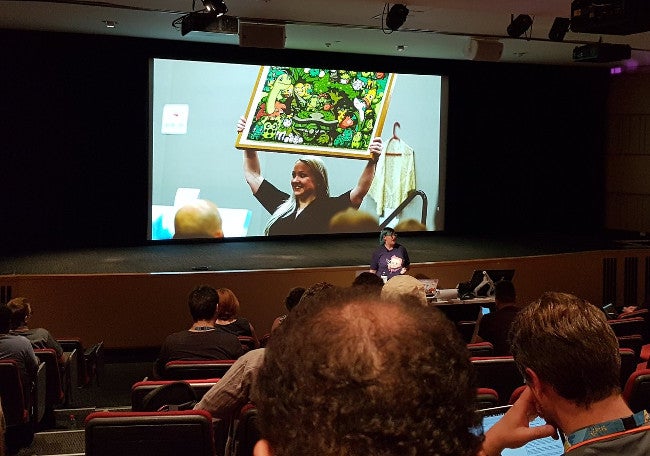 A photo from the audience during the final talk of the Art and Tech miniconf. Photo: SuperRoach, CC BY-NC SA 2.0.

Want more? You can watch talks from the miniconf on Art + Tech's YouTube playlist.

Linux.conf.au will return January 21-25, 2019, in Christchurch, New Zealand. Details about the event will be posted throughout the year on linux.conf.au.

Katie McLaughlin - Katie has worn many different hats over the years. She has previously been a software developer for many languages, systems administrator for multiple operating systems, and speaker on many different topics. When she's not changing the world, she enjoys making cooking, tapestries, and seeing just how well various application stacks handle emoji.
More about me

I am with the Opensource, it helps people to understand different thing and learn from them.