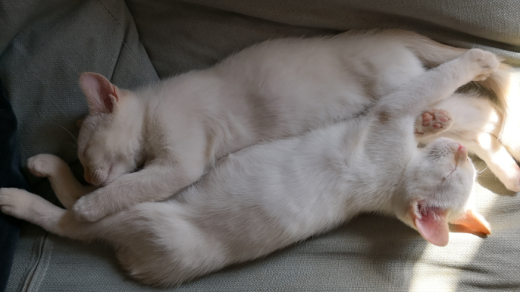 It's summer,1 it's hot, nobody wants to work. What we all want to do is look at pictures of cute kittens and go "ahhh." So I'm going to exploit you all with an article about kittens and (vaguely about) security. It's light-hearted, it's fluffy, and it has a picture of two of our cats at the top of it. What's not to like?

Now, don't get me wrong: I like users realise the importance of users, really I do. They are the reason we have jobs. Unluckily, they're often the reason we wish we didn't have the jobs we do. I'm surprised that nobody has previously bothered to compile a list comparing them with kittens, so I've done it for you. For ease of reading, I've grouped ways in which users are like kittens towards the top of the table and ways in which they're unlike kittens towards the bottom (though I think we can all think of exceptions to almost all of the dissimilarities if we try hard enough).

Please enjoy this post, share it inappropriately on social media, and feel free to suggest other ways in which kittens and users are similar or dissimilar.

1. At the time of writing, in the Northern Hemisphere, where I'm currently located. Apologies to all those readers for whom it is not summer.

This article originally appeared on Alice, Eve, and Bob – a security blog with a lot more footnotes and is republished with permission.

I've been in and around Open Source since around 1997, and have been running (GNU) Linux as my main desktop at home and work since then: not always easy...  I'm a security bod and architect, co-founder of the Enarx project, and am currently CEO of a start-up in the Confidential Computing space.  I have a blog - "Alice, Eve & Bob" - where I write (sometimes rather parenthetically) about secu
More about me