Take to the virtual skies with FlightGear 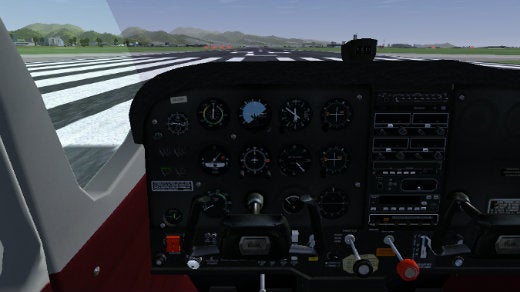 If you've ever dreamed of piloting a plane, you'll love FlightGear. It's a full-featured, open source flight simulator that runs on Linux, MacOS, and Windows.

The FlightGear project began in 1996 due to dissatisfaction with commercial flight simulation programs, which were not scalable. Its goal was to create a sophisticated, robust, extensible, and open flight simulator framework for use in academia and pilot training or by anyone who wants to play with a flight simulation scenario.

FlightGear's hardware requirements are fairly modest, including an accelerated 3D video card that supports OpenGL for smooth framerates. It runs well on my Linux laptop with an i5 processor and only 4GB of RAM. Its documentation includes an online manual; a wiki with portals for users and developers; and extensive tutorials (such as one for its default aircraft, the Cessna 172p) to teach you how to operate it.

It's easy to install on both Fedora and Ubuntu Linux. Fedora users can consult the Fedora installation page to get FlightGear running.

Once the installation finished, I launched it from the GUI, but you can also launch the application from a terminal by entering:

The menu on the left side of the application window provides configuration options. 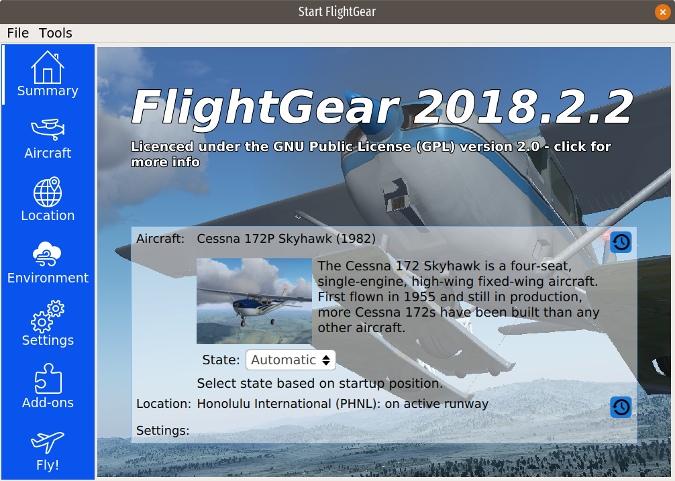 Summary returns you to the application's home screen.

Aircraft shows the aircraft you have installed and offers the option to install up to 539 other aircraft available in FlightGear's default "hangar." I installed a Cessna 150L, a Piper J-3 Cub, and a Bombardier CRJ-700. Some of the aircraft (including the CRJ-700) have tutorials to teach you how to fly a commercial jet; I found the tutorials informative and accurate. 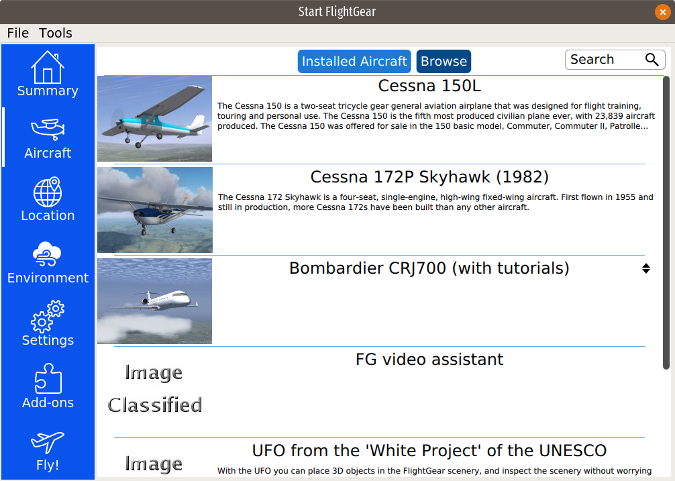 To select an aircraft to pilot, highlight it and click on Fly! at the bottom of the menu. I chose the default Cessna 172p and found the cockpit depiction extremely accurate. 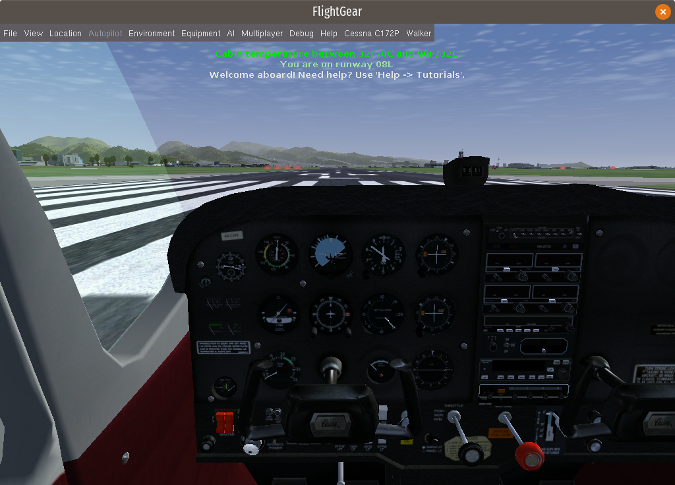 The default airport is Honolulu, but you can change it in the Location menu by providing your favorite airport's ICAO airport code identifier. I found some small, local, non-towered airports like Olean and Dunkirk, New York, as well as larger airports including Buffalo, O'Hare, and Raleigh—and could even choose a specific runway.

Under Environment, you can adjust the time of day, the season, and the weather. The simulation includes advance weather modeling and the ability to download current weather from NOAA.

Settings provides an option to start the simulation in Paused mode by default. Also in Settings, you can select multi-player mode, which allows you to "fly" with other players on FlightGear supporters' global network of servers that allow for multiple users. You must have a moderately fast internet connection to support this functionality.

The Add-ons menu allows you to download aircraft and additional scenery.

To "fly" my Cessna, I used a Logitech joystick that worked well. You can calibrate your joystick using an option in the File menu at the top.

Overall, I found the simulation very accurate and think the graphics are great. Try FlightGear yourself — I think you will find it a very fun and complete simulation package.

What to read next
Tags
Gaming
Don Watkins