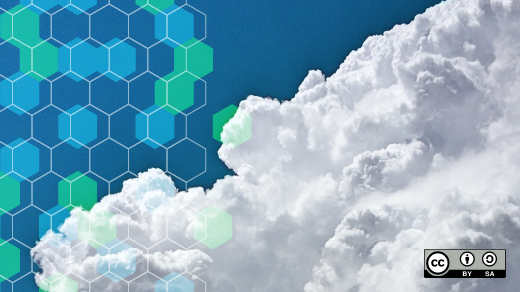 As the practice of developing applications with containers is getting more popular, cloud-native applications are also on the rise. By definition:

"Cloud-native technologies are used to develop applications built with services packaged in containers, deployed as microservices, and managed on elastic infrastructure through agile DevOps processes and continuous delivery workflows."

This description includes four elements that are integral to cloud-native applications:

Although these technologies have very distinct histories, they complement each other well and have led to surprisingly exponential growth of cloud-native applications and toolsets in a short time. This Cloud Native Computing Foundation (CNCF) infographic shows the size and breadth of the cloud-native application ecosystem today. 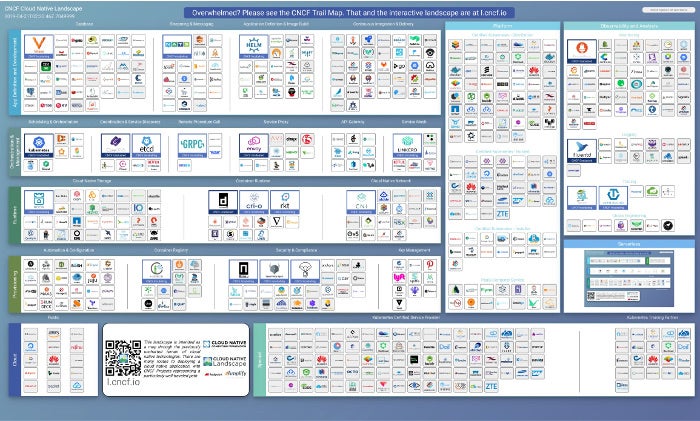 I mean, just look at that! And this is just a start. Just as NodeJS’s creation sparked the explosion of endless JavaScript tools, the popularity of container technology started the exponential growth of cloud-native applications.

The good news is that there are several organizations that oversee and connect these dots together. One is the Open Containers Initiative (OCI), which is a lightweight, open governance structure (or project), "formed under the auspices of the Linux Foundation for the express purpose of creating open industry standards around container formats and runtime." The other is the CNCF, "an open source software foundation dedicated to making cloud native computing universal and sustainable."

In addition to building a community around cloud-native applications generally, CNCF also helps projects set up structured governance around their cloud-native applications. CNCF created the concept of maturity levels—Sandbox, Incubating, or Graduated—which correspond to the Innovators, Early Adopters, and Early Majority tiers on the diagram below. 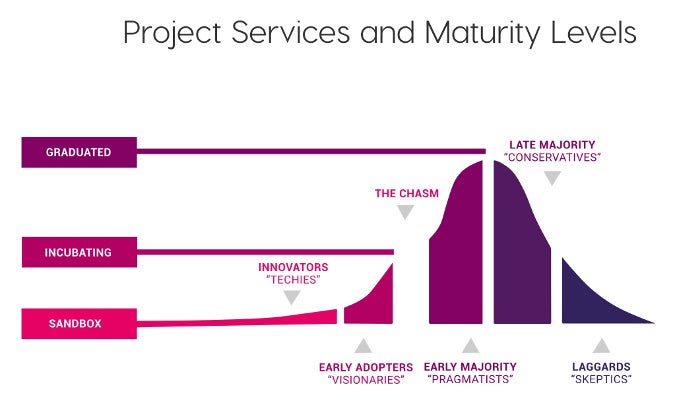 The CNCF has detailed criteria for each maturity level (included below for readers’ convenience). A two-thirds supermajority of the Technical Oversight Committee (TOC) is required for a project to be Incubating or Graduated.

To be accepted in the sandbox, a project must have at least two TOC sponsors. See the CNCF Sandbox Guidelines v1.0 for the detailed process.

Note: The incubation level is the point at which we expect to perform full due diligence on projects.

To be accepted to incubating stage, a project must meet the sandbox stage requirements plus:

To graduate from sandbox or incubating status, or for a new project to join as a graduated project, a project must meet the incubating stage criteria plus:

While it’s impossible to cover all of the CNCF projects in this article, I’ll describe are nine of most interesting Graduated and Incubating open source projects.

I also created this video tutorial to walk through these projects.

Graduated projects are considered mature—adopted by many organizations—and must adhere to the CNCF’s guidelines. Following are three of the most popular open source CNCF Graduated projects. (Note that some of these descriptions are adapted and reused from the projects' websites.)

Ah, Kubernetes. How can we talk about cloud-native applications without mentioning Kubernetes? Invented by Google, Kubernetes is undoubtedly the most famous container-orchestration platform for container-based applications, and it is also an open source tool.

Docker Swarm and Mesosphere Marathon are other container-orchestration engines, but it is safe to say that Kubernetes has won the race (at least for now). Kubernetes also gave birth to Container-as-a-Service (CaaS) platforms like OKD, the Origin community distribution of Kubernetes that powers Red Hat OpenShift.

Prometheus is an open source system monitoring and alerting toolkit built at SoundCloud in 2012. Since then, many companies and organizations have adopted Prometheus, and the project has a very active developer and user community. It is now a standalone open source project that is maintained independently of the company. 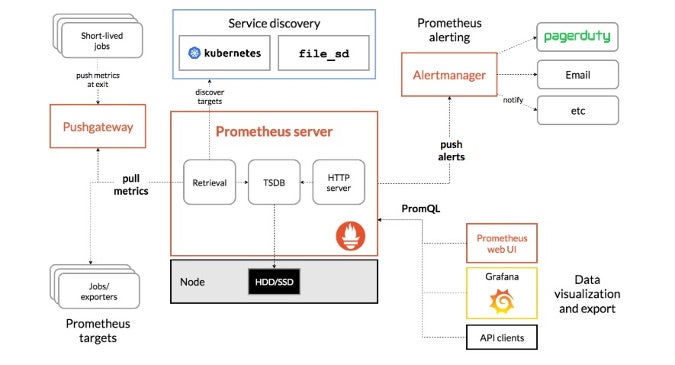 The easiest way to think about Prometheus is to visualize a production system that needs to be up 24 hours a day and 365 days a year. No system is perfect, and there are techniques to reduce failures (called fault-tolerant systems). However, if an issue occurs, the most important thing is to identify it as soon as possible. That is where a monitoring tool like Prometheus comes in handy. Prometheus is more than a container-monitoring tool, but it is most popular among cloud-native application companies. In addition, other open source monitoring tools, including Grafana, leverage Prometheus.

The best way to get started with Prometheus is to check out its GitHub repo. Running Prometheus locally is easy, but you need to have a container engine installed. You can access detailed documentation on Prometheus’ website.

Envoy (or Envoy Proxy) is an open source edge and service proxy designed for cloud-native applications. Created at Lyft, Envoy is a high-performance, C++, distributed proxy designed for single services and applications, as well as a communications bus and a universal data plane designed for large microservice service mesh architectures. Built on the learnings of solutions such as Nginx, HAProxy, hardware load balancers, and cloud load balancers, Envoy runs alongside every application and abstracts the network by providing common features in a platform-agnostic manner.

When all service traffic in an infrastructure flows through an Envoy mesh, it becomes easy to visualize problem areas via consistent observability, tune overall performance, and add substrate features in a single place. Basically, Envoy Proxy is a service mesh tool that helps organizations build a fault-tolerant system for production environments.

There are numerous alternatives for service mesh applications, such as Uber’s Linkerd (discussed below) and Istio. Istio extends Envoy Proxy by deploying as a Sidecar and leveraging the Mixer configuration model. Notable Envoy features are:

Understanding Envoy, proving its capabilities, and realizing its full benefits require extensive experience with running production-level environments. You can learn more in its detailed documentation and by accessing its GitHub repository.

Following are six of the most popular open source CNCF Incubating projects.

rkt, pronounced "rocket," is a pod-native container engine. It has a command-line interface (CLI) for running containers on Linux. In a sense, it is similar to other containers, like Podman, Docker, and CRI-O.

rkt was originally developed by CoreOS (later acquired by Red Hat), and you can find detailed documentation on its website and access the source code on GitHub.

Jaeger is an open source, end-to-end distributed tracing system for cloud-native applications. In one way, it is a monitoring solution like Prometheus. Yet it is different because its use cases extend into:

Jaeger is an open source technology built by Uber. You can find detailed documentation on its website and its source code on GitHub.

Like Lyft with Envoy Proxy, Uber developed Linkerd as an open source solution to maintain its service at the production level. In some ways, Linkerd is just like Envoy, as both are service mesh tools designed to give platform-wide observability, reliability, and security without requiring configuration or code changes.

However, there are some subtle differences between the two. While Envoy and Linkerd function as proxies and can report over services that are connected, Envoy isn’t designed to be a Kubernetes Ingress controller, as Linkerd is. Notable features of Linkerd include:

Helm is basically the package manager for Kubernetes. If you’ve used Apache Maven, Maven Nexus, or a similar service, you will understand Helm’s purpose. Helm helps you manage your Kubernetes application. It uses "Helm Charts" to define, install, and upgrade even the most complex Kubernetes applications. Helm isn’t the only method for this; another concept becoming popular is Kubernetes Operators, which are used by Red Hat OpenShift 4.

You can try Helm by following the quickstart guide in its documentation or its GitHub guide.

Etcd is a distributed, reliable key-value store for the most critical data in a distributed system. Its key features are:

Etcd is used as a built-in default data storage for Kubernetes and many other technologies. That said, it is rarely run independently or as a separate service; instead, it utilizes the one integrated into Kubernetes, OKD/OpenShift, or another service. There is also an etcd Operator to manage its lifecycle and unlock its API management capabilities:

You can learn more in etcd’s documentation and access its source code on GitHub.

CRI-O is an Open Container Initiative (OCI)-compliant implementation of the Kubernetes runtime interface. CRI-O is used for various functions including:

CRI-O provides plenty of documentation, including guides, tutorials, articles, and even podcasts, and you can also access its GitHub page.

Did I miss an interesting open source cloud-native project? Please let me know in the comments.

What to read next
Tags
Cloud
Bryant Son