Learn multiple ways to copy files on Linux, and the advantages of each. 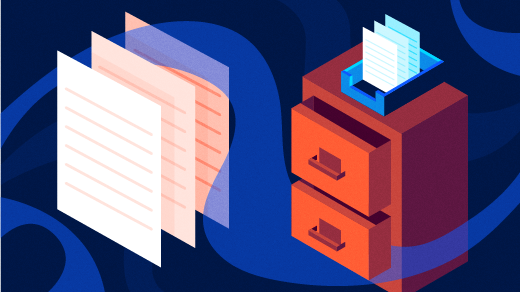 Copying documents used to require a dedicated staff member in offices, and then a dedicated machine. Today, copying is a task computer users do without a second thought. Copying data on a computer is so trivial that copies are made without you realizing it, such as when dragging a file to an external drive.

The concept that digital entities are trivial to reproduce is pervasive, so most modern computerists don’t think about the options available for duplicating their work. And yet, there are several different ways to copy a file on Linux. Each method has nuanced features that might benefit you, depending on what you need to get done.

Here are a number of ways to copy files on Linux, BSD, and Mac.

Copying in the GUI

As with most operating systems, you can do all of your file management in the GUI, if that's the way you prefer to work.

The most obvious way to copy a file is the way you’re probably used to copying files on computers: drag and drop. On most Linux desktops, dragging and dropping from one local folder to another local folder moves a file by default. You can change this behavior to a copy operation by holding down the Ctrl key after you start dragging the file.

Your cursor may show an indicator, such as a plus sign, to show that you are in copy mode: 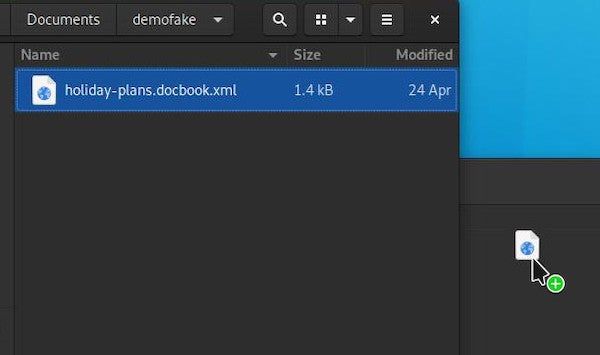 Note that if the file exists on a remote system, whether it’s a web server or another computer on your own network that you access through a file-sharing protocol, the default action is often to copy, not move, the file.

If you find dragging and dropping files around your desktop imprecise or clumsy, or doing so takes your hands away from your keyboard too much, you can usually copy a file using the right-click menu. This possibility depends on the file manager you use, but generally, a right-click produces a contextual menu containing common actions.

The contextual menu copy action stores the file path (where the file exists on your system) in your clipboard so you can then paste the file somewhere else: 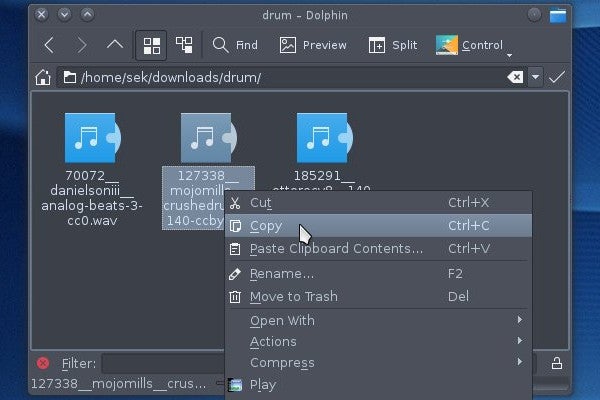 Copying on the command line

While the GUI is a generally familiar way to copy files, copying in a terminal can be more efficient.

The obvious terminal-based equivalent to copying and pasting a file on the desktop is the cp command. This command copies files and directories and is relatively straightforward. It uses the familiar source and target (strictly in that order) syntax, so to copy a file called example.txt into your Documents directory:

Just like when you drag and drop a file onto a folder, this action doesn’t replace Documents with example.txt. Instead, cp detects that Documents is a folder, and places a copy of example.txt into it.

You can also, conveniently (and efficiently), rename the file as you copy it:

That fact is important because it allows you to make a copy of a file in the same directory as the original:

The cat command is one of the most misunderstood commands, but only because it exemplifies the extreme flexibility of a POSIX system. Among everything else cat does (including its intended purpose of concatenating files), it can also copy. For instance, with cat you can create two copies from one file with just a single command. You can’t do that with cp.

The significance of using cat to copy a file is the way the system interprets the action. When you use cp to copy a file, the file’s attributes are copied along with the file itself. That means that the file permissions of the duplicate are the same as the original:

Using cat to read the contents of a file into another file, however, invokes a system call to create a new file. These new files are subject to your default umask settings. To learn more about umask, read Alex Juarez’s article covering umask and permissions in general.

Run umask to get the current settings:

This setting means that new files created in this location are granted 664 (rw-rw-r--) permission because nothing is masked by the first digits of the umask setting (and the executable bit is not a default bit for file creation), and the write permission is blocked by the final digit.

When you copy with cat, you don’t actually copy the file. You use cat to read the contents of the file, and then redirect the output into a new file:

As you can see, cat created a brand new file with the system’s default umask applied.

In the end, when all you want to do is copy a file, the technicalities often don’t matter. But sometimes you want to copy a file and end up with a default set of permissions, and with cat you can do it all in one command.

The rsync command is a versatile tool for copying files, with the notable ability to synchronize your source and destination. At its most simple, rsync can be used similarly to cp command:

The command’s true power lies in its ability to not copy when it’s not necessary. If you use rsync to copy a file into a directory, but that file already exists in that directory, then rsync doesn’t bother performing the copy operation. Locally, that fact doesn’t necessarily mean much, but if you’re copying gigabytes of data to a remote server, this feature makes a world of difference.

What does make a difference even locally, though, is the command’s ability to differentiate files that share the same name but which contain different data. If you’ve ever found yourself faced with two copies of what is meant to be the same directory, then rsync can synchronize them into one directory containing the latest changes from each. This setup is a pretty common occurrence in industries that haven’t yet discovered the magic of version control, and for backup solutions in which there is one source of truth to propagate.

You can emulate this situation intentionally by creating two folders, one called example and the other example_dupe:

Create a file in the first folder:

Use rsync to synchronize the two directories. The most common options for this operation are -a (for archive, which ensures symlinks and other special files are preserved) and -v (for verbose, providing feedback to you on the command’s progress):

If the file you are treating as the source diverges, then the target is updated to match:

If there is no change, then no copy occurs.

The rsync command has many options not available in cp, such as the ability to set target permissions, exclude files, delete outdated files that don’t appear in both directories, and much more. Use rsync as a powerful replacement for cp, or just as a useful supplement.

Many ways to copy

There are many ways to achieve essentially the same outcome on a POSIX system, so it seems that open source’s reputation for flexibility is well earned. Have I missed a useful way to copy data? Share your copy hacks in the comments.