The Flatpak application distribution model is helping developers target Linux in a new and easy way, and it's helping Linux users install more applications without worrying about what version of Linux they're running. It's an exciting technology, and on my Fedora Silverblue system, it's the default package installation method. All of my desktop applications on Silverblue and several of my favorites I use on Slackware are running as Flatpaks.

There's one thing that makes Flatpak a little awkward in some cases, though, and that's its naming scheme. For instance, when I install Emacs as a Flatpak, it's registered on my system as org.gnu.emacs. This is done, apparently, for fear of clobbering the name of an existing system-level application—if I already have Emacs installed, then what's the differentiation between /usr/bin/emacs and the Flatpak installation of Emacs? For this reason, a Flatpak like Emacs gets installed to something like (get ready for it) this path:

It's not symlinked from /usr/bin or /opt, the location isn't added to the user's path, and launching a Flatpak requires an invocation like this:

That's a lot of typing compared to just entering emacs.

Names are hard to remember

The Flatpak naming scheme also assumes you use a Flatpak often enough to remember the package's reverse DNS name. Aside from the structure, there's no standard for naming a Flatpak, so one Flatpak could use camel-case, such as org.libreoffice.LibreOffice, while another might use a mix, such as org.gimp.GIMP.

Some names are easier to remember than others, too. For example, org.glimpse_editor.Glimpse is easy to remember only if you remember its website is http://glimpse-editor.org, rather than glimpse.org, and an underscore replaces the dash.

From the viewpoint of Flatpak developers, this isn't a problem because Flatpaks are intended to be launched from the desktop. You don't have to remember org.gnu.emacs because you can always launch it from GNOME Activities or your K-Menu or a similar graphical launcher.

This holds true often enough, but sometimes it's more convenient to launch an application from a terminal because you're already using the terminal. Whether I want an image in Glimpse or a text file in Emacs or a music file in VLC, I'm very frequently too busy in the terminal to "drop" out to the desktop (even though it's just one key away!), launch the application, click through the menus to open a file, and then click through my filesystem to find the file I want to open.

It's just faster to type the command followed by the file I want to open. But if I have to type flatpak run org.something.app, it isn't.

The obvious solution to all of this is a Bash alias. With a Bash alias, you can assign any arbitrary command to nearly any word you want. There are many common Bash aliases that nearly every Linux user has on their system, either by conscious choice or because the distribution presets them:

You can create aliases for Flatpaks, too:

It didn't take long for the process of adding aliases manually to feel too laborious to me. And for me, it's not the task but the process. Opening an editor and adding an alias is remarkably quick, but it's a break in my workflow.

What I really want is something I can, mentally and physically, append to the initial Flatpak install process as needed. Not all the Flatpaks I install require an alias. For instance, here's a partial list of Flatpaks on my Silverblue system:

Therefore, the requirements I defined for myself are:

The solution I've settled on lately is a custom little Bash script that I use to add aliases for Flatpaks I know I want to access quickly from my terminal. Here's the script: 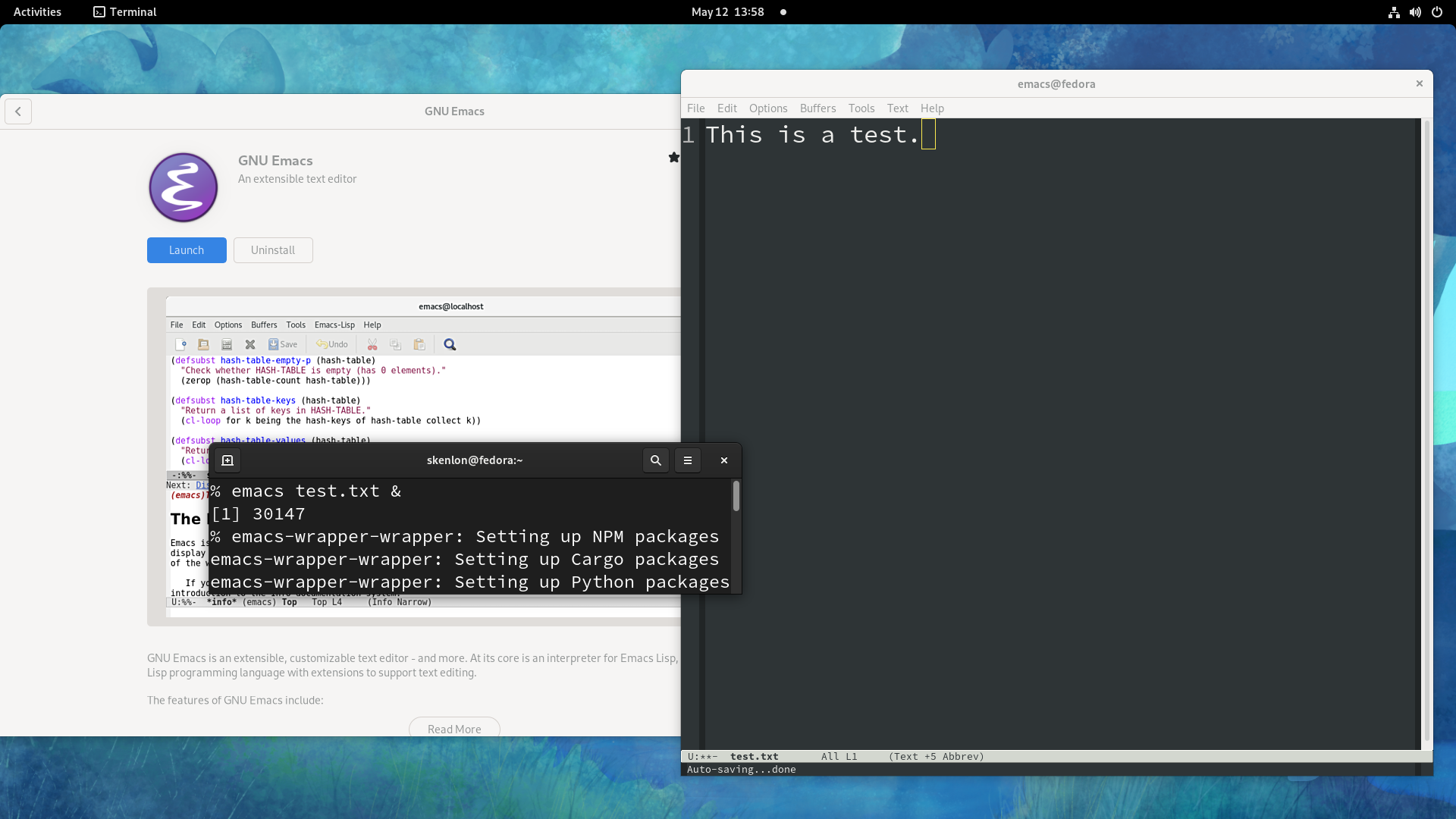 When I install a Flatpak I expect to want to launch from the terminal, I finish the process with this script:

If an alias already exists, it's discovered, and no new alias is created.

I can remove an alias, too:

This doesn't remove the Flatpak and only operates on the dedicated flatpak_aliases file.

All Flatpak aliases are added to ~/.bashrc.d/flatpak_aliases, which you can automatically source when your shell is launched by placing this manner of code into your .bashrc or .bash_profile or .profile file:

Flatpaks integrate really well with desktop Linux, and they have a strong, reproducible infrastructure behind them. They're relatively easy to build and a breeze to use. With just a little added effort, you can bring them down into the terminal so that you can use them whichever way works best for you. There are probably several other projects like this out there and probably a few in development that are far more advanced than a simple Bash script, but this one's been working well for me so far. Try it out, or share your custom solution in the comments!

Flatpak secrets management is getting an upgrade. Here's what's coming.