Why the open source way trumps the crowdsourcing way

A while back, I wrote an article about why the term crowdsourcing bugs me. Another thing that drives me nuts? When people confuse crowdsourcing and open source. My friend David Burney wrote an interesting post on this subject a while back highlighting the differences.

It finally hit me the other day just why the open source way seems so much more elegantly designed (and less wasteful) to me than what I'll call "the crowdsourcing way."

1. Typical projects run the open source way have many contributors and many beneficiaries.

2. Typical projects run the crowdsourcing way have many contributors and few beneficiaries. 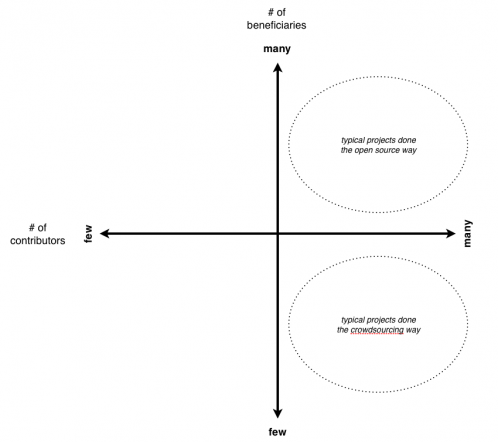 It's such a simple concept, it seems obvious. Let's look at a few examples to illustrate why this simple difference means so much.

Linux is perhaps the most obvious example of a project (or set of projects, depending on how you look at things) being run the open source way.

Each contributor who works on a Linux-related project offers time and effort, and is a 100% guaranteed beneficiary of something in return—free access to use Linux distributions made better by his/her contribution.

Everyone who contributes also benefits. Beautiful.

Now let's look at an example of something being run the crowdsourcing way. I'll pick on 99designs, a site where designers compete to design logos and other materials for clients. It's truly astounding—some of the 99designs projects have hundreds of designers contributing ideas.

Yet in most cases only one designer is the beneficiary of something in return—the designer whose idea is chosen by the client. All of the other design work, representing in some cases 100s or 1000s of hours of time, is wasted.

At least in an open source project like Linux, even if your code isn't accepted, you still benefit from being able to use the distribution. In an extreme crowdsourcing example like the one above, you get nothing.

I began thinking about all of the open innovation, open source, and crowdsourcing projects I've run across in the last few years (Stefan Lindegaard has a great list here). If 99designs is near one end of the spectrum, and Linux is near the other end, I wondered, where do these other projects fall?

So a task for you: Here's a short list of well-known and oft-written-about open innovation, open source, and crowdsourcing projects.

Where would you place these projects on the chart?

1. Many contributors, many beneficiaries

I'd love to hear your thoughts.