Bill Taylor, the co-founder and editor of Fast Company magazine, joined us for today's edition of our Open Your World Forum series to talk about his new book, Practically Radical. Bill was joined by Polly LaBarre, the co-author of his earlier book, Mavericks at Work: Why the Most Original Minds in Business Win. Polly was also a part of the original Fast Company team and served as senior editor for nearly a decade. Like Mavericks, Practically Radical is already a Wall Street Journal bestseller.

"Bill undertook a multi-year journey doing what he does best, which is exploring and scouring the world for the organizations and individuals that are setting the stage for the future," Polly said. He sought the answers for companies and leaders who are looking to change their organizations in a meaningful way. How do you lead your industry, and how do you conduct yourself as a leader?

On the book's origins, Bill explained, "It's rooted in personal reflections on the past." Before Fast Company launched, a group gathered to discuss how one might overthrow a successful company. It was a gathering of change agents from companies that were doing absolutely fine, but who sensed that there were massive changes on the horizon. They were worried that their colleagues weren't concerned enough with those changes. That was 1995.

As a first example, Bill spoke of secret shoppers sent to banks to say, "I'm thinking about becoming a customer of this bank. Why should I do it with you instead of your competitor?" More than 2/3 of the time, front line people had no good answer to that question. They either avoided answering or made something up that had no relationship to the bank's actual stance. It was stunning to Bill, although not as much to the CEOs who had faced the problem for years.

How can a business expect to outperform their competition if their own employees can't explain the organization? This is the huge opportunity for companies to transform their futures.

The criticality of originality

Winning big today is really about thinking differently from everyone else. This is the age of disruption. You can't do big things if you're doing them just a little differently.

"Originality has become the acid test of strategy," Bill said. If there's one simple method at the heart of this book, it's that it's not good enough to be pretty good at everything. You must be superlative at something. Too many people are comfortable operating in the middle of the road. "But the middle of the road is the road to ruin," he continued. Find out what you're the most of in your field, and become even more of it.

The real force of the Netflix model is that in an industry that was about one-way and limited choice, they've introduced social strategy and openness. You rate movies and find new ones based on your preferences and tastes--and the preferences and tastes of people similar to you. It's a powerful form of collective intelligence. Customers rate movies four million times per day. Ninety-eight percent of their movies get rented at least once a quarter. It's not just a shipping system; it's a social system. Individual customers become smarter by the intelligence of the greater community. It's more than a company. It's a cause. Netflix found a way to stand for something in an industry where most others are indistinguishable.

Even the most disruptive leaders recognize that success also means caring more than other companies--about your customers, your employees, and not compromising. "You can't create something special in the marketplace unless you create something special in the workplace," he said. Many business leaders focus on "what keeps you up at night," but the more powerful question is, "What gets you up in the morning?" What energizes you even as your surroundings become more challenging? And how do you help your colleagues care more than your competition?

Where do you start when your organization seems fundamentally unchangeable?

Start with your own history. If you're trying to make dramatic change in a long-established organization, you can't simply disavow the past and state that you're working on the future. To make change succeed, the best leaders rediscover and reinterpret their pasts to raise the confidence of the people at every level of the organization. It helps keep them all in sync and on the same path.

The Girl Scouts will be celebrating their 100th anniversary next year. A few years ago, Kathy Cloninger took over this iconic brand that was anything but cutting-edge. She went back to 1912 to the founders, to see what Juliette Gordon-Lowe had to say. She read those first documents. The first handbook. That handbook is aggressive, an attempt to make leaders out of girls in an era when women didn't even have the right to vote. So the mantra in the Girl Scouts organization became, WWJD--What Would Juliette Do? Reminding them of that aggressive past helped them think more ambitiously about the future.

There are already pockets in your company where small groups of people with small projects or products know the future. They're innovators with new ways of interacting with your customers. Find them. "Catch people in the act of doing things right," Bill said. "Shine the light on them...on the grassroots innovators of the future."

Are you learning as fast as the world is changing?

The most successful organizations and leaders don't just try to out-muscle the competition. They try to out-think them. Every single day. They get the best ideas from the widest variety of places.

What you see as a leader depends on where you look. Opportunities lie hidden in plain sight. It's the leaders who see differently--ones who help their organizations see differently--who are successful. The most effective innovators practice "vujà dé"--looking at familiar situations as if they've never seen them before. "You can't let what you know limit what you imagine," Bill said.

Henry Ford West Bloomfield Hospital is one of the most compelling examples of "vujà dé."

The Henry Ford Health System is the large hospital system in Detroit, a difficult community and a health system with a difficult past. But in the last few years under CEO Nancy Schlichting, they've cut mortality by 25% in this hospital founded in 1915.

They had a chance a few years ago to build a hospital from scratch in West Bloomfield for the first time since 1950. Other new hospitals had been acquisitions. Schlichting said that they had to forget everything they knew--or thought they knew--about the role of the hospital in a community. From day one, they re-imagined being a hospital in America. 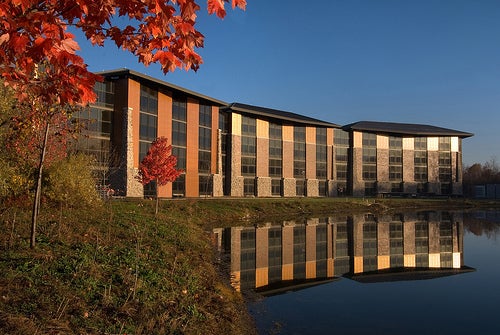 When it comes to world-class service, they had the best medical expertise. What they needed was innovation in design principles--a CEO with fresh eyes. Gerard van Grinsven was a CEO at the Ritz Carlton, was that person, and he went from the world of hospitality to the world of hospitals. It's now a 160 acre site with 300 beds designed to look like a northern Michigan vacation lodge. It doesn't have the sterile feel of a traditional hospital. There's a main street and a farmer's market. You're met by a concierge and stay in a private room with food created by a celebrity chef who has designed 3,000 recipes. The food is so good, both in taste and health, that they now do a million-dollar catering business and have a ninety-seat demonstration kitchen where they teach people to cook. Can you imagine telling your party guests that you ordered hospital food for catering?

Gerard van Grinsven had a vision that from the moment you encounter this hospital, it should be completely different from what you expect a hospital to be. Although it sounds expensive, the reality is that what sound like luxuries are extremely cost-effective, both for the hospital and patients. Private rooms have dramatically decreased the rate of infection. Family members are more relaxed. And the overall effect is shorter hospital stays. Further, because they're so good at teaching you how to be healthy, the rate of readmission (often high) are much lower.

This is a short summary of what Bill and Polly had to say. Listen to the full audio recording of the session.