Nicolas Pujol and Toni Schneider are experts on navigating free and open business models. Pujol, author of The Mindshare Market, helped MySQL grow from a $10m startup to a $1B acquisition, making it the second largest open source company at the time. Schneider is CEO of Automattic, most known for its open source blogging platform WordPress, which now boasts 20 million blogs and 300 million unique monthly visitors.

Free as a way of business

Pujol spoke first on the general idea of free business models, as described in his new book. He posits that although some people say open source is a temporary phenomenon, waiting to be replaced, at its most basic description, openness and freedom are just two very old concepts: gratis or sharing. Commerce has had many ways through history of happening without literal money. People remark pejoratively that there's no such thing as a free lunch, a saying with its roots with Rudyard Kipling. But Pujol says the expression doesn't deserve its meaning--that an improvement would be giving customers the option of a free lunch with an option to pay.

There are a million words in the English dictionary, but only one word that required the FTC to come up with a guide for its use in commerce: "free," which is addressed in FTC Guide 251.1. So just how attractive is free as in zero price?

Two researchers, Kristina Shampan’er and Dan Ariely, brought chocolates to MIT's campus to find out. (Read "How Small Is Zero Price?") They conducted three sub-experiments, and in each, participants could choose between a Hershey's Kiss and Ferrero Rocher chocolates. In the first experiment, the chocolates both cost money--the Hershey's two cents, and the Ferrero 27 cents. In the second, both were reduced by one penny, but that cut the price of the Hershey's in half. For the third, they cut it again, making the Hershey's free, and the Ferrero 25 cents. At that point you see the greatest change in market share. 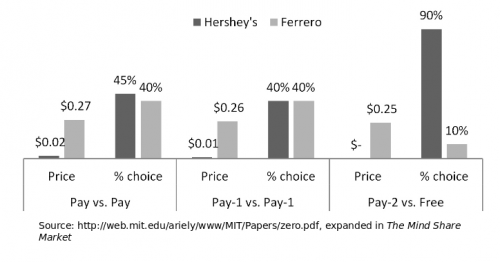 Mind share markets are spreading through software, telephony, higher education, and more fields. Pujol speculated that everything that can be made will be since through productive marketing, customers can see value before any commercial transaction occurs.

He offered several suggestions for how to monetize a free product:

Pujol concluded by observing that while some people believe that the never-paying user is the worst case, there's still one thing that's worse than having a user who doesn't pay--when that user takes your competitor's free product.

Schneider took the conversation by launching into the example of WordPress, which existed before Automattic. In 2003, WordPress began as a fork of another open source blogging platform whose production had gone dormant. It began to gain popularity around 2005.

As a solution, they created two entities: Automattic, which is the commercial side, and The WordPress Foundation, which is the open source community side. He describes them as the yin and yang: seemingly contradicting forces that work together. Despite their opposing goals, one of profit and one of community and collaboration, they have the mutual mission of getting as many people as possible on the platform. Setting up the separate entities clearly separated the motivations. Automattic doesn't have to worry about over-commercializing the community, and the foundation can operate as non-profit as they like without hurting the business' bottom line.

Has it been successful? It took several years to gain the trust of the community regarding the new model and their project being commercialized. Today usage is split roughly 50/50. The two sides have grown in parallel and both been successful. The business is profitable and doing well, and the community has grown to thousands of contributors.

The WordPress software is free and open source. The company focuses on premium SaaS services around the platform, such as the WordPress.com hosted products and VIP, a service for successful, high-traffic sites like CNN and Time.

Competitively, a free-to-paid model means an existing company you're going after may not even notice you, because you're not charging anything. But when you move to a paid model, their users have already become your users.

WordPress also operates by eliminating lock-in. You can run your WordPress blog as a hosted solution, on your own, on someone else's service--your IT strategy isn't tied to the company. You have the ability to move where you like, which gives them another significant advantage.

Overall, they operate on an à la carte model that combines freemium and premium. Rather than tiers of service that many people are accustomed to, you buy each individual service as you like or don't. That lets the company introduce new paid services and price them where they need to be without cramming them into fixed tiers that their customers are locked into.

The first lesson Schneider shared was around trademarks. An open source project releases all of its code, but that project still has a name--who is going to own it, and who is going to enforce and protect it? Schneider recommends spelling out these answers up front before the project grows, and the answers become commercial interests and the source of fighting.

The WordPress trademark belongs to the foundation, not the company. That choice was made because the community created the name before the company existed, and they felt that it was in the long-term interest of the name to belong to the foundation without a company controlling it and trying to maximize it for near-term profit. The company has a license to use it.

The final lesson Schnieder shared was around the organizational model, and it was taken directly from the community. "We've built the company in a very distributed fashion," Schneider said. When the company started, the core set of WordPress developers had been working that way around the world. The company carried on that tradition that was working so well. It now has 85 employees, but only eight at headquarters in San Francisco. The biggest benefit is the ability to attract and hire the right people, regardless of where they're physically located.

An ogg file recording of the webcast is available below as an attachment to this post.