I would like to take a few moments to introduce Buffalo, the access point and router which provides network connectivity to portable computers in the Free Software Foundation's office. More specifically, we are using Buffalo WZR-HP-G300NH, which features the free-software-supported Atheros AR9132 chipset with 32MB of flash memory and 64MB of RAM.

Previously, Buffalo ran OpenWRT, a GNU/Linux firmware distribution which is very popular with tinkerers seeking to gain a greater understanding and control of their own embedded devices. Despite representing an important advancement compared to proprietary stock firmware which usually comes preinstalled on devices like Buffalo, OpenWRT unfortunately still contains some binary blobs for which source code is not available.

Recently, a community of concerned programmers has emerged determined to remedy this situation. To advance the free software frontier in yet another area, they have built LibreWRT, a completely free GNU/Linux distribution for embedded devices, based on OpenWRT. Once the project evolved into a full-fledged distribution, the FSF was eager to give it a try. 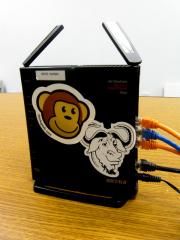 Thus, encouraged by assurances in the documentation that Buffalo is virtually impossible to brick, I set out to flash the device with "Creative Craftsman," the current development version of LibreWRT. First, I needed to build the image. Thanks to clear documentation and use of familiar tools such as GNU make, the process of building the LibreWRT image for Buffalo turned out to be pretty straightforward. When in doubt about the next step to take, I sought help on the #librewrt IRC channel of Freenode, where I received useful advice from the developers of the project every time I asked.

After I finished the build process and identified which of the generated images is the appropriate one, I proceeded with flashing via TFTP without major difficulties following instructions on the OpenWRT wiki. Once logged in, I was presented with BusyBox, a popular lightweight free software Unix-like environment. Even for those without much expertise in router configuration, configuring LibreWRT is relatively painless. Again, the OpenWRT wiki has plentiful resources to guide the user through the entire process with many examples of the most commonly used setups.

With the final stage concluded, I am happy to report that Buffalo has been chugging along without any hiccups providing wired as well as wireless network connectivity for all the portable computers in our office for over a week now. It used to be the FSF's only computing device containing binary blobs. Now, the FSF can proudly confirm that even all of the unused software present on its computing devices is free. To learn more about LibreWRT, and how you can use and support the project, head to their official wiki.

What to read next
Tags
Business
Networking
Martin Dluhos 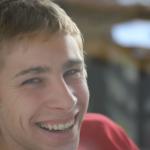 Martin joined the FSF as a junior systems administrator after interning for the summer. He recently graduated from Grinnell College, a liberal-arts institution where he majored in Computer Science.
More about me

Try this open source alternative to Salesforce
This work is licensed under a Creative Commons Attribution-No Derivative Works 3.0 license (or later version)
LinkedInTwitterFacebookWhatsAppEmailReddit