The secret ingredient in open source 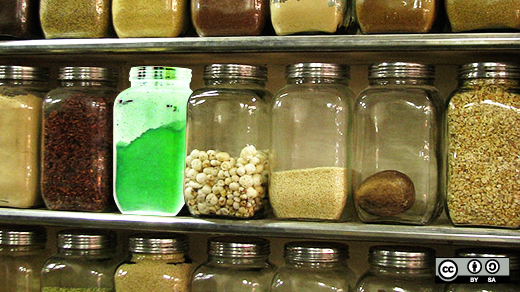 Open source has a secret. Do you know what it is? It has to do with a common characteristic found across successful open source communities that set them apart from others.

For those that are new to open source, understanding the intricacies of how open source communities share, communicate, and govern themselves may take a while to understand. Each community is different, but there are a few commonalities between them that lay the foundation for a successful project. If you’re just getting into open source, be sure to read more about the different tools that organize communities of practice in The Open Source Way book.

For those open source veterans out there, I think you’ll agree that

there is one ingredient in our communities that really makes us tick. It’s not a single tool like GitHub or the way we have conversations on IRC or mailing lists. It’s something that each and every one of us brings to the table every day. The secret ingredient that really makes open source work is passion.

Here are a few examples that highlight my position.

What version of Linux do you use?

A simple, yet engaging question that got an amazing response as a poll on opensource.com. By far, this is the most successful poll we’ve had on the site—with hundreds of votes and numerous comments.

I asked myself, why is this poll so successful? Why did this question invoke the reaction that it did? And my conclusion was that the Linux community is very passionate. And not only are they passionate, they are also advocates and ambassadors for the Linux project. The open source community is proud of their accomplishments as well as the technology and software that they use. It’s natural for them to express this passion by telling the world about it.

An open culture fueled by passion

One of my passions is teaching Red Hat culture during our new hire orientation. About every two weeks, we have a batch of new hires that join Red Hat and go through a two-day onboarding process. I teach Red Hat culture—not an easy topic to cover. My goal is to share what it’s like to work at Red Hat in 45 minutes.

One of the exercises I do with each group is have them describe Red Hat culture. I ask them to draw inspiration from their experience during the hiring process, the previous presenters  during their orientation, or from the video of The Show we watch during my presentation. For the most part, I get very similar answers that include cultural characteristics like collaboration, openness, fun, and you guessed it, passion!

In my time at Red Hat, I’ve worked with some of the most passionate people. From open source veterans that live the culture to newbies that are exciting about working a different way. They are eager to work in a collaborative environment where their contributions and ideas matter. And when I see the sparkle in their eyes and hear the passion in their voice, I know they’re ready to be a part of an open source culture.

Being a part of something bigger than yourself

I recently helped form a Code for America brigade in Raleigh, NC. This group of passionate citizen volunteers worked on a plan to enable existing applications and technology created by Code for America to deploy an Adopt-A-Shelter application at adoptashelter.raleighnc.gov. The project highlights almost 200 bus shelters that are available to be adopted by citizens in Raleigh.

Our brigade is participating in the Code for America Race for Reuse campaign, however the city of Raleigh didn’t ask us to do this. As citizens, we saw an opportunity to improve our city and implement a technology front-end to an existing program offered by the city. It wasn’t just about deploying a project, it was about making our city and the citizen experience a little bit better. By forming and organizing our brigade, we’re helping to advance the open government movement.

The same can be said for many open source communities. It’s not about us as individuals. It’s about the the impact our contributions are making to create a positive difference in our world.

Businesses and organizations who don't inherently have a passionate community around what they do, fail when they try to replicate the success seen in open source communities. Why? Because you can’t make people passionate about what they do. You can’t teach or train passion. It comes from the heart. It comes from what motivates people to contribute.

If passion is the secret ingredient to open source, then we’ve just started to scratch the surface on what we can accomplish. The open source way teaches us to be collaborative, transparent, and participatory. But it doesn’t teach us to be passionate. That’s what we ourselves bring to our communities of practice. The passion you bring is what makes the community great. And it’s that passion that allows us to change the world the open source way.

Consider reverse psychology. The king of france introduced the potato to his subjects by growing it in a special garden with a high fence and armed guards. But he let the guards go from midnight to 6am. When people ask me about linux, I usually say: "I don't think you're ready to handle that kind of power."

It's obvious you're not ready to practice the open source way ;)
Jason

I completely agree. Passion is the very first motivation that create good things (someone would say "excellence," but that word is abused), not economic reasons and/or competition.
I see this everywhere: my best students are motivated mainly by their interest in what they learn, not by the desire to get good scores.

[A totally unrelated example: I do part of my grocery shopping in little stores in downtown. A characteristic common to all that stores is that their owner have a real passion, beyond the economic significance, about what they do.]

As a open source contributor, I know the excitement that comes from knowing that out there, there are many people that use what I made; maybe it is just a little piece of code, maybe just a bug corrected, but it is a piece of mine and it is out there, spread over the world.
By the way, I know from reliable source that the same feeling is what motivates many *researchers* and *developers* in Microsoft: it is great to know that your work is making a difference for many people.