Roche: From oversight to insight | Opensource.com

Roche: From oversight to insight 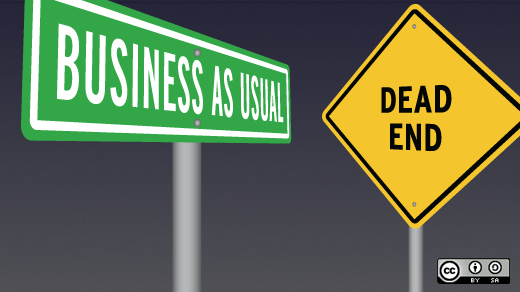 Can a company bust bureaucracy by liberating people to manage themselves? A team of managers from Roche Pharmaceuticals set out to prove this point through a management experiment—and reaped big dividends in the process.

Perhaps nowhere is the gap between management rhetoric and reality so wide as in innovation. In theory it is something that every company desires and values – and certainly needs. In practice the obstacles put in the way of a process that is already fraught with difficulty and frustration are legion.

One of the clammiest of the dead hands is bureaucracy, and this was the focus of a group of Roche managers who met at London Business School in April 2009.  The team consisted of Oliver Bleck, Nicolas Dunant, Sven Hauptmann, Paul Lambert, Kristen Pressner and Nathan Vaidyanathan, representing multiple different geographic locations and six diverse areas within the Roche Pharmaceuticals business.

As a pharmaceutical firm, Roche has a mission that puts innovation at the heart of what it does. Without innovation, it can’t compete. And the perception was that red tape was absorbing too much energy. ‘We needed to think of something to tackle bureaucracy that we as a group felt was getting a bit out of control,’ says Kristen Pressner, a manager in Global Learning and Development. ‘There may have been good reasons for having bureaucratic processes in place; but in some cases those reasons may not be that useful any more.’

Can insight take the place of bureaucratic oversight? Is it feasible to use radical transparency to dispense with bureaucracy without losing control? Is personal responsibility a substitute for external controls? These are big questions to which the we believed that the answer had to be yes. Our intuition was not only that there are alternatives to bureaucracy, but that they are better ones – simpler, more aligned with Roche’s organizational values, motivating – and hopefully (but more contentiously) neutral on costs.

We decided to test our hypothesis by designing an experiment. We chose a process that people considered a pain (no problem there…), that affected many, that was significant enough for people to sit up and take notice of the results, and where transparency was both applicable and reasonable. Obviously it couldn’t be used on anything that was a statutory requirement. And it had to be an area where they could see results quickly – in effect, they had time for an experiment that would run just three months.

Defining the focus of the experiment

Among the candidates we discussed were the annual budget, timekeeping, flexible work arrangements and expat approvals. In the end we settled on travel and expenses. That might not seem the sexiest call, but it had several advantages. After all, we wanted to test a general hypothesis – that cutting bureaucracy was not only feasible but desirable – and travel expenses ticked all the criteria. It certainly epitomised in fairly extreme form the misalignment of values that psychologically as well as physically drains professional effort and commitment. ‘I’m responsible for €60m sales but need approval to buy a €3 cup of coffee’, as one participant manager summed up the general mood. As well, the team was startled to find that Roche Pharma’s annual travel budget adds up to CHF450m ($485m)– so the stakes were potentially higher than many people had expected.

Setting up the experiment

The next step was to set up a workable experiment, and establish some clear hypotheses to be tested.  The three specific things we wanted to test were:

1. Would people be more motivated by removal of the bureaucratic process of pre-authorisation?

2. Was the new process simpler than before?

3. What would be the consequences for costs?

To ensure broad coverage and robust results, we came up with a design inspired by the trials our company conducts as part of the drug discovery process.  Specifically, we established two pairs of matched groups, one pair taken from the Basel headquarters, the other from a sales affiliate at Grenzach, Germany. In each pair there were 50 people per group, so a sample of 200 people in all. One group was a control whose travel authorisation process continued to operate as before – those ’participants’ had no change in their current process.

The second group in each location, however, was told  that as part of the pilot project  their travel was to become self-authorised. Subject, of course, to normal company policy (who was entitled to travel business class, etc), Roche employees make the decision to travel on business and, via the Travel Department, book their flights and hotels, with no further approvals (no approval to travel, no matter how far, and no approval/signature for expenses after the trip). The proviso was that expenses information would be transparent, posted on the intranet for other employees to see.

Transparency posed an interesting challenge to the whole initiative. German culture is extremely protective of privacy and private information. The Works Council would not only have to be informed but give its consent for personal information to go on the web, and a number of people doubted whether sanction would be forthcoming. To their delight, however, and in a good augury for the future, we persuaded the council to allow the experiment with only minor modifications. Instead of having information posted on a website, as for the Basel group, the Works Council preferred it sent out by email. And rather than full transparency with individuals identified by name, the arrangement was a compromise in which slightly aggregated information would be visible to participants and line managers, but not to others. In the event, the qualified German approval (as well as being an achievement in itself) added an extra layer of richness to the experiment. There were now in effect three levels of transparency--we had the headquarters group in Basel where we basically knew what every individual’s expenses were, line by line. In the middle, we had the German group where they could see their own expenditure and almost like a peer group and what they were spending. But it was more opaque: they couldn’t see the details. And then we had the control group, which basically couldn’t see anything.

We also needed to take into account an organizational bias: Roche had bought Genentech in 2008, and this meant extensive unusual travel patterns for specific teams within the company during 2008 and 2009. As we wanted to baseline the travel spend, we picked two groups for the experiment who were immune to the Genentech transacation – namely German Sales Force, as well as the not-extensive travelling Manufacturing group in Basel.

We also spent a lot of time ensuring the survey was correctly translated between English and German so as not to introduce any biases in the questionnaire. The survey was available in English or German.

As discussed above, the experiment was designed to test three things:

1. Would people be more motivated by removal of the bureaucratic process of pre-authorisation?

2. Was the new process simpler than before?

3. What would be the consequences for costs?

The first two were measured by before-and-after surveys. To avoid as far as possible the operation of a ‘Hawthorne effect’ (people working harder and better because they know they are being watched as part of an experiment) we took care to downplay the experimental nature of the project. The two groups were simply told that ‘two or three departments had been selected for a pilot project; it would start on that day; these are the changes, and wait for further information. We kept it very low key, which actually caused some confusion with the line managers. But we thought that would be better than telling them hey, you’re part of a really exciting experiment, and then we’d be fully into Hawthorne,‘ said Sven Hauptmann

As the team was quick to realise, however, transparency itself had certain parallels with being observed… So would people take it as a kind of Big Brother experience? In that case motivation might end up damaged instead of boosted, as they had cautiously hoped. In the event, were positively astonished by the response. Instead of the neutral to modest improvement expected, 45 per cent of participants said motivation had increased as a result of the changes, with another 46 per cent reporting no change. ‘Our worry was what if motivation goes down, what if people hate having the information out on the web somewhere?’ says Pressner. ‘We thought we’d be lucky to score 5 per cent. How many people would you expect to be more motivated to work for a company based on just changing the travel process?’

The survey left no doubt: 83 per cent of the sample felt that the approach was better attuned with Roche values, and the same proportion wanted it adopted as normal procedure. Only a very small minority – 6 per cent – were uncomfortable with having their expenses available for others to see: and there was no significant difference in opinion between transparent and semi-transparent groups.

Similarly overwhelming majorities (74 per cent and 87 per cent) reported that the new process was more efficient and took less time than the old one – ‘Inefficient approval process for travel; sometimes I have the feeling I work at a government authority’, was one heartfelt comment.

As to cost, the team had fully expected travel costs to go up with self-authorisation, potentially leaving members with the task of justifying the changes by pointing to the anticipated small positive effect on motivation.In fact, compared with the equivalent period in 2008 the expenses of the two experimental groups went down, one quite substantially, while totals of the two control groups were unchanged. This was something of a revelation. ‘I hope my expenses will motivate others to spend as little as I do!’

For anyone else eager to duplicate this kind of innovation in their organization, a few lessons.

An interesting experiment and write up, thanks for sharing. How have the senior management team reacted to the results, was the T & E policy changed and any plans to adopt a similar approach in other areas?