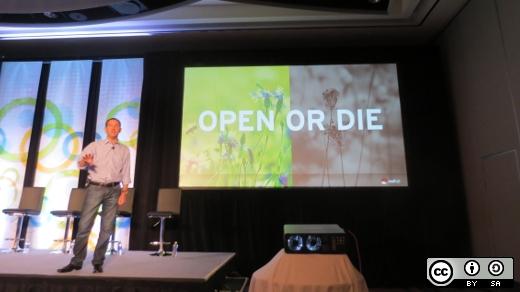 A shift is happening in the way innovation is occurring.

Businesses are moving from closed systems to open, collaborative innovation. Red Hat CEO, Jim Whitehurst, focused on the three major components influencing this shift in his keynote, Open or die?, at the Open Business Conference held in San Francisco this week (April 29-30, 2013).

First, there are two major shifts happening in technology and innovation that are laying the foundation for the open innovation model. On the technology side, the way computing is being built and delivered has changed. During the industrial revolution, the auto lathe revolutionized the making of standard parts. We’re seeing that same paradigm shift happen today in how computing is becoming a commodity.

The second component is where innovation is occurring. "Open source has gone from focusing on existing categories to truly leading in open innovation," said Jim Whitehurst. "Open source started with existing technology in established categories such as Linux replacing UNIX."

"Enterprises are choosing their innovation architecture when they choose their technology platform," said Whitehurst.  "Open source is tackling brand new problems that vendors haven’t dreamed of yet."

When enterprises are selecting software, they are essentially selecting their innovation model for the future. They are choosing open versus closed.

Companies are betting on the same open source technology that companies like Google, Facebook, and PayPal are using. They believe their IT infrastructure and innovation model will be in a better place in three years.

Open source is changing the way in which companies are choosing technology. Its not about features, functionality, and price point. Technology decisions are being made on the belief in the next generation technology—and open source is at the foundation of this technology.

The third component was more of a question and a conversation starter: Open or die? Whitehurst asked if companies can survive in the old model. Will the old model of closed collaboration be the default choice or will this wave of open innovation be the new path.

What do you think: Will the future of innovation thrive on open or die on closed?

More and more business are leveraging the power of "open innovation" (at least, the try)
In todays world, where information is only one second away - everything else is balanced, so the best idea ultimately wins.
This idea is not the one building most commercial value due information-scarcity - instead the idea is build on freely availabe information, which turns out which one actually is the best idea if all other parameters are the same.

Jim gave an excellent presentation, and the focus on open collaboration, micro-iterations, and user-led innovation is a game changer.

The dynamics are shifting power away from closed, proprietary corporate leadership towards open collaboration and user-led innovation. The shift is disrupting traditional business strategies, IT operation practices, and market dominance.

The open source ethos of open collaboration and listening to users is providing open source companies an edge in a user-led environment. Mobile adoption, technology consumerization, data democratization, and Cloud self-service access are shifting the market’s paradigm towards user-led innovation.

My impressions on the OSBC conference and the memes can be found at http://blog.cobia.net/cobiacomm/2013/04/30/open-source-business-conference-impressions/