The power of Docker and open source ecosystems

Reading through the latest list of top 10 open source projects on Opensource.com has been a reminder of what a great year 2014 has been for open source. Established projects like OpenStack and Mongo have continued to break new records in adoption and usage. We’ve seen incredible momentum from newer projects like Apache Mesos, Kubernetes, and Deis. And we’ve also seen that open source companies like Cloudera, Hortonworks, and Ceph can reach meaningful business milestones while remaining true to their open source roots. Virtually everywhere you look in the IT stack—from storage to networking, compute, mobile, and virtualization—the most exciting innovations are being led by open source.

Of course I am excited that the Docker open source project is being recognized for the second year in a row as a top 10 open source project, but I am even more excited by what the list says about the power of open source ecosystems in general. Several of the other companies on the list, such as Ansible, Apache Mesos, Kubernetes and OpenStack are great partners in the Docker ecosystem. And virtually all have, like Docker, embraced a truly “open” model, including open governance, open contribution, open design, and open interfaces—all of which are essential to establishing flourishing ecosystems.

That we can truly celebrate each other’s successes is in and of itself a great aspect of the open source movement. Ecosystem partners are a driving force behind any thriving project.

In the case of Docker, early success was dependent on getting support from all the major platform providers, including Linux distributions (Red Hat, Canonical), virtualization (VMware, KVM, Hyper-V), cloud providers (AWS, Azure, GCE, Rackspace, and SoftLayer), and PaaS/IaaS (OpenStack, Cloud Foundry, OpenShift). Additionally, it was dependent on having a vibrant set of tools and applications that could leverage and sit on top of us. That is why we are especially proud that there are now over 20,000 projects (such as UIs, management frameworks, monitoring tools) and over 70,000 Dockerized applications available for use. The diversity of these solutions point to the innovation that can come when you define a broad problem space for partners to address and then provide them the right tools, especially APIs, that allow them to quickly address areas that have yet to be tackled by others. It is one thing to make a solution that democratizes a previously complex technology like containers; it is another to have the vocal support of an ecosystem to make sure the technology is accessible to all. Docker would not have succeeded as an ecosystem, technology, or movement without commitment from these partners.

The role of project contributors

As we are well aware, no discussion of open source ecosystems would be complete without highlighting the role of project contributors. Contributors that are the lifeblood of open source and are a force multiplier that provides a project the energy and critical mass that it could never achieve within the four walls of a single company. Contributors are not just there to contribute code, but are active daily to comment on proposals through the open-design process so that new ideas on how to enrich the project are flowing in on a daily basis. For example, over 90% of all contributors to the Docker project are not Docker, Inc. employees, and they have collectively contributed over 2,500 merged “pull requests.” These pull requests cover not only long tail items like bug fixes or integrations, but also critical functionality in the areas of security, networking, and orchestration.

As we step into 2015, we are excited to see even greater opportunities as we expand our APIs to enable our partners to add new levels of sophistication to their solutions.

2015 is a year that enterprise organizations will en masse shift from single container applications to multi-container, multi-host distributed applications. That evolution creates incredible opportunity for our partners as we collectively work with enterprises as they shift to this new model for portable, dynamic applications. By promoting a “batteries included, but removable” model, we hope to create the opportunity for partners to create differentiated experiences on top of and around Docker, while meeting user demands for consistency and portability.

We are excited to see great things from big partners like Microsoft (which has committed to bring the Docker engine and container format to Windows developers), AWS (which has made its Amazon EC2 Container Service broadly available), and IBM (which is providing new integrations with its Docker-based container service). We are equally excited to collaborate with emerging companies like CircleCI, ClusterHQ, Drone.io, OpDemand, TravisCI and Weave to name a few that should be on your radar for solutions in 2015.

The power of open source isn’t about a single open source project or even the ecosystem around a single project. Rather, it is that the lowering of barriers to cooperation that allow all of the projects to co-innovate and co-evolve. We are at a point where virtually every aspect of the IT stack is being refactored, and the ability to work together (whether as partners or friendly competition) makes it far more likely that the best solution for users will emerge. The projects on the 2014 list aren’t there in isolation. We are there because we are able to work together to make the whole IT ecosystem stronger. 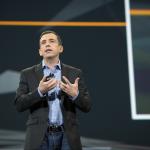 Currently the CEO of Docker, Ben Golub is a distinguished industry veteran, having successfully grown and sold two prior start-ups (Gluster and Plaxo), in addition to playing a major role in the growth and IPO of VeriSign. As president and CEO, he directed both Plaxo and Gluster through successful acquisitions by Comcast and Red Hat respectively.
More about me